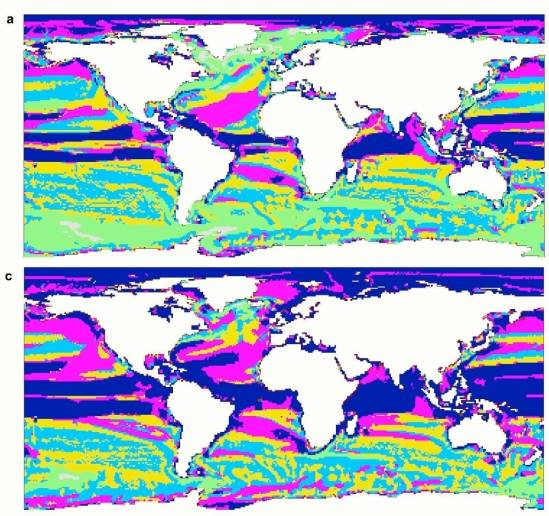 An international team of scientists tracks how fast and in which direction local climates — and species — have shifted.

As climate change unfolds over the next century, plants and animals will need to adapt or shift locations to follow their ideal climate. A new study provides an innovative global map of where species are likely to succeed or fail in keeping up with a changing climate. The findings appear in the science journal Nature.

As part of a UC Santa Barbara National Center for Ecological Analysis and Synthesis (NCEAS) working group, 18 international researchers analyzed 50 years of sea surface and land temperature data (1960-2009). They also projected temperature changes under two future scenarios, one that assumes greenhouse gas emissions are stabilized by 2100 and a second that assumes these emissions continue to increase. The resulting maps display where new temperature conditions are being generated and where existing environments may disappear.

This rare global study, which examines scenarios both on land and in the ocean, demonstrates that climate migration is far more complex than a simple shift toward the poles. “As species move to track their ideal temperature conditions, they will sometimes run into what we call a ‘climate sink,’ where the preferred climate simply disappears leaving species nowhere to go because they are up against a coastline or other barrier,” explained Carrie Kappel, an NCEAS associate and one of the paper’s authors. “There are a number of those sinks around the world where movement is blocked by a coastline, like in the northern Adriatic Sea or the northern Gulf of Mexico, and there’s no way out because it’s warmer everywhere behind.” 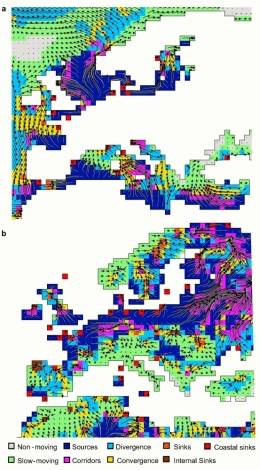 Australia offers a terrestrial example. There, species already experiencing warmer temperatures have started to seek relief by moving to higher elevations, or farther south. However, some species of animals and plants cannot move large distances, and some cannot move at all.

“Species migration can have important consequences for local biodiversity,” said corresponding author Elvira Poloczanska, a research scientist with the Climate Adaptation Flagship of Australia’s national science agency, the Commonwealth Scientific and Industrial Research Organisation (CSIRO) in Brisbane. “For example, the dry, flat continental interior of Australia is a hot, arid region where species already exist close to the margin of their thermal tolerances. Some species driven south from monsoonal northern Australia in the hope of cooler habitats may perish in one of the harshest places on Earth.”

The maps generated from the study data not only show areas where plants and animals may struggle to find new homes in a changing climate but also provide crucial information for targeting conservation efforts — information that could help conservation planners think more strategically about how best to manage biodiversity for future sustainability.

“One of the greatest challenges these days is how to help species survive in the face of climate change,” said co-author Ben Halpern, a professor at UCSB’s Bren School of Environmental Science & Management. “The maps we produced offer a key tool for helping guide these decisions. For example, where species are likely to face climate traps, we will need to explore less traditional actions, such as assisted migration, where people help move species past barriers into their preferred environment.” 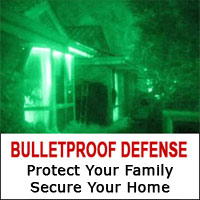 “From other work, we know that many species have shifted where they live in ways that match the pattern of temperature change over the last 60 years,” Kappel noted. “This gives us confidence that we can base conservation planning on what we’ve learned about what’s already happening.”

According to Halpern, it’s not a question of whether climate change is happening, but what we can do about it. “The writing is on the wall: species have already started moving in response to climate change," he said. "We can either sit back and watch as species get squeezed out of existence and food webs reshuffle or we can try to be proactive in designing conservation strategies. Our research and maps offer a window into what the future of biodiversity will look like, and we have a chance to improve the view from that window.”