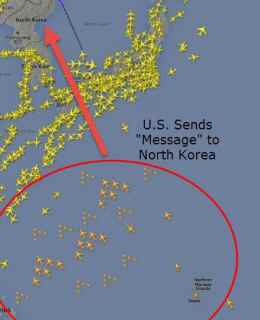 In a staggering display of US air power, an utterly ENROMOUS number of fighter jets and bombers are enroute from Guam; a "message" to North Korea!

Take a look at the radar image above.  Within the red circle are TEN squadrons of US fighter aircraft (fifty fighter jets), as well as THREE squadrons of US Bomber aircraft (Eighteen Bombers).  All are heading north from Guam toward our "exercise" with the South Koreans.  But . . . . . is it an exercise?  Has the US finally had enough of North Korea making nuclear threats?(source)

Bill Gertz for the Free Beacon reports North Korea poses an increasing danger of using long-range missiles capable of striking the United States with nuclear warheads and is fielding new road-mobile and submarine-launched missiles, the Pentagon said in a report to Congress made public Friday.