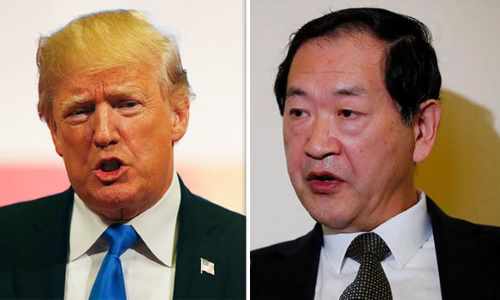 NORTH Korea has issued an ultimatum to the United States to cease military drills around the Korean peninsula or face their “nuclear deterrent.”

Han Tae Song, the hermit kingdom’s ambassador to the United Nations in Geneva, issued the stark warning to the US President as World War 3 fears soar.

Mr Han said: “As long as there is continuous hostile policy against my country by the US and as long as there are continued war games at our doorstep, then there will not be negotiations.

The hermit official stated that North Korea could consider abandoning its nuclear program, but that “threats from America” prevent considerations from taking place.

The ambassador kept the rogue nation’s cards close to its chest after failing to clarify if the country is planning another ballistic missile test.

He stated: “The DPRK, my country, will continue to build-up its self-defense capability, the pivot of which is nuclear forces and capability for a triumphant strike as long as US and hostile forces keep up nuclear threat and blackmail.

“Our country plans ultimate completion of the nuclear force.”

The North Korean added that the US “never accepted” calling off their joint military exercises near the peninsula.

He declared: “So if they accept such things, then we will think what we do in the future.”

The official disclosed the effects of the economic and military squeeze being put on Kim Jong-un’s despot state constitute “large-scale human rights violations” and cited the delayed delivery of aid and consumer goods.

He went on: “It is obvious that the aim of the sanctions is to overthrow the system of my country by isolating and stifling it and to intentionally bring about humanitarian disaster instead of preventing weapons development as claimed by the US and its followers.”

Han Tae Songn also affirmed that the rogue nation is preparing for further sanctions to be imposed as the world tightens its grip against it following continued threats of nuclear annihilation.

He said: “The media is saying the Americans and Trump are considering such things.

”But that is their business and then we don’t mind what they want to do against my country since the aim is quite clear.

“So we are ready for such kinds of measures taken by America against my country.” 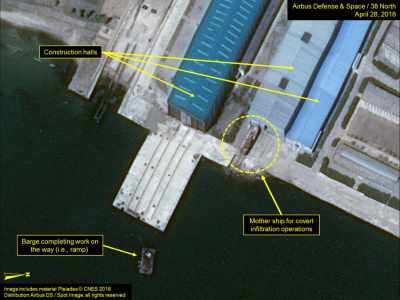 North Korea watchdog 38 North warned that work has been underway at the Sinpo South Shipyard for a number of weeks.

They said the hermit state “is on an aggressive building schedule” and determined to deploy its first operational ballistic missile sub.

A report this week said: “Throughout 2017 there has been continued movement of parts and components into and out of the two parts yards adjacent to the constructions halls in the centre of the shipyard.

“Accompanying this has been the movement of the gantry and tower cranes that service the yards.”

The Washington-based group revealed the shipyard historically deals with submarine manufacturing – although said an imminent deployment is unlikely.

The report said: “These activities suggest a prolonged and ongoing shipbuilding program, which is supported by the fact that the Sinpo South Shipyard has historically been the primary manufacturer of large submarines for the Korean People’s Navy.

“While both the submarine and test stand barge appear able to put to sea at relatively short notice, no activities are observed suggesting a forthcoming at-sea or submerged SLBM (submarine-based ballistic missile) test.”

I don't know about the rest of you, but I have had my fill of North Korea threatening us with nuclear attack.  My wife even casually said to me tonight, "Why don't we just nuke THEM and be done with it?"  It may come to exactly that.

Part of me feels sorry for North Korea; they're so out of touch with reality; so convinced of their own strength, that they've lost sight of WHO they are threatening: the single most powerful nation on earth.

I think we've arrived at the time where they need to be starkly reminded of who they have been threatening.

It turns out, I am not the only person who holds this view. . .

Countries with Diplomats, citizens, or non-governmental organizations inside North Korea are now strongly advised to withdraw ALL such persons from North Korea forthwith.

Old Time Wisdom. You do not need a lot of expensive equipment to store foods for a crisis using the methods taught here. Even better, Old Time Wisdom pays for itself quickly as you begin to put away garden produce or even meats that you buy on sale. For most folks it's simply the biggest bargain of their lives. You can finally become self-sufficient and any extra money saved in food expense goes right back to your pocket. Frankly, at the end of the day, Old Time Wisdom actually makes you money! What's more, the videos take you by the hand, step by step, through the entire process of "putting away" almost any food you can think of. It's very much like having a food storage professional right there with you every step of the way.