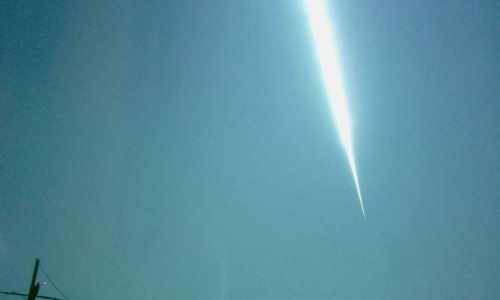 More than 150 people reported seeing a bright meteor, known as a fireball, streaking through the sky Wednesday afternoon in Sea Girt.

People who reported seeing the fireball — a very bright meteor — around 10:30 p.m. described it as a mix of colors, including white, orange, yellow, red and blue, with a trail. Commenters on the Jersey Shore Hurricane News Facebook page remarked that they saw it break into pieces in the sky.

People reported seeing the bright object from areas in New Jersey, Pennsylvania, Delaware and all the way up in New Hampshire, according to a log on the American Meteor Society website.

The fireball reportedly soared through the sky from northwest and southeast at about 2:40 p.m.

The reports included nine from the central and southern parts of New Jersey, including Trenton, Voorhees, Vineland, Ocean City and Stone Harbor, according to a log on the American Meteor Society website.

The fireball was also seen in New York, Pennsylvania, Delaware, Maryland, Washington, D.C., Virginia and North Carolina.
A video of the meteor — which appears to have been recorded on a dash-mounted camera in a vehicle —
In the video, a flash of light can be seen appearing out of the blue sky as the vehicle is driving through the intersection of Route 71 and Sea Girt Avenue.

Although the fireball was spotted close to the peak period of the annual Orionid meteor shower, New Jersey astronomer Kevin D. Conod said it was "definitely not related" to this meteor shower, based on the time it appeared and the location in the sky.

Conod, who manages the Newark Museum's Dreyfuss Planetarium and writes an astronomy column for The Star-Ledger, said the constellation Orion is below the horizon in the afternoon, and the fireball seemed to be coming from the northwest, moving towards the southeast, so it would not have originated from Orion.

In October, hundreds of people said they saw a different meteor in New Jersey, Pennsylvania, Delaware and New Hampshire. That fireball was captured on video by a driver in Sea Girt.

Fireballs are meteors that are brighter than magnitude -4, which is the same magnitude as Venus as seen in the morning or evening sky, according to the American Meteor Society. A certain type of fireball, known as a bolide, explodes at its end and often shatters into pieces.

Several thousand fireballs exist in the Earth's atmosphere every day, but most happen over uninhabited areas or are hidden by daylight, the AMS says. The brighter the fireball, the less common the event.

"Your average everyday random meteor – even bright ones like this – are pieces from the asteroid belt and have nothing to do with meteor showers," Conod noted in an email. "The latter are caused by dust left behind from comets, so (they are) completely different sources."

Disaster preparation has received a lot of attention in the recent past. In fact, people who live in every corner of the world prepare for various disasters such as famine and war. Some of them even prepare for zombies. It is always better to prepare to face disasters as they can hit us at unexpected times. However, it should be done according to a plan. That’s where The Lost Ways comes into play. This guide follows a scientific approach to help people prepare for disasters. In fact, it would let people know about the secret methods followed by the ancestors to survive disasters. They include a variety of disasters such as droughts, diseases, financial crisis, wars, famines and everything else life threw at them. For More Information about The Lost Ways 2 Survival Guide Click Here