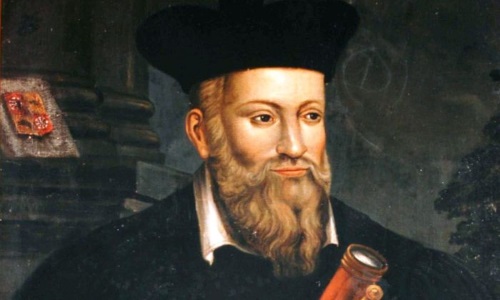 Michel de Nostredame (depending on the source, 14 or 21 December 1503 – 2 July 1566), usually Latinised as Nostradamus, was a French apothecary and reputed seer who published collections of prophecies that have since become widely famous. He is best known for his book Les Propheties, the first edition of which appeared in 1555. Since the publication of this book, which has rarely been out of print since his death, Nostradamus has attracted a following that, along with much of the popular press, credits him with predicting many major world events.

Nostradamus enthusiasts have credited him with predicting a copious number of events in world history, including the French Revolution, the atom bomb, the rise of Adolf Hitler and the September 11 attacks on the World Trade Center. Detractors, however, see such predictions as examples of vaticinium ex eventu, retroactive clairvoyance and selective thinking, which find non-existent patterns in ambiguous statements. Because of this, it has been claimed that Nostradamus is "100% accurate at predicting events after they happen".

Not known by most people, the universe is in the midst of a subtle battle of epic proportions. Most of this battle will be in the subtle realms. The battle on the physical realm, respectively on Earth, is largely due to the subtle dimension. That's why awareness of its appearance is limited only to those who are the most evolved people on Earth with a high spiritual level.
Only a small part of the battle will take place on Earth. However, this part itself will be catastrophic and cause mass destruction. From a physical point of view, we will witness this battle fracture in the form of unleashing the forces of nature and the 3rd World War in which weapons of mass destruction, including nuclear weapons, will be used.
The rise of natural disasters such as floods, earthquakes and volcanic eruptions will be primarily due to the increase in spiritual impurity fueled by injustice on Earth. I hope that the American government pays close attention to its activities in Haiti because it allow the United States to take a close look at dealing with the aftermath of earthquakes. In this way–someday in the future when there’s a devastating earthquake in California or the New Madrid fault-line, we will knowledgeable and expereinced in dealing with this type of crisis.
People who are going to precipitate the 3rd World War will be under the control of the higher-level negative energies.

The world has experienced an increase in natural disasters, terrorist activities, wars and political upheavals in recent times. There is no break in this trend or any sign of slowing. Many of us may have a sense of helplessness when we see our world tilting uncontrollably to more and more old times. A number of viewers like Nostradamus, Edgar Cayce, etc. They prophesied times of turbulence and suffering of cataclysmic proportions. There has been much discussion about a battle between the forces of good and evil that would take place roughly in the times in which we live.

If you ask me, Nostradamus is pretty much nailing it right out the gate here. Donald Trump ("the false trumpet") is concealing his own madness. As U.S. President, he will cause Byzantium, i.e. Greece — a key entry point into the west for refugees! — to change its laws. The president of Egypt will "want the edict withdrawn," presumably because if the displaced millions are not going north, they're going south. As a result of all this, the Euro collapses.

If the first example was the sort of quatrain that shows off the Nostradamean illusion of specificity, this one shows off why he's so goddamn scary. Trump, here, is enraged: someone or something has betrayed him. In the name of religion, he talks blood and he ends up swimming in it. The land of "milk and honey" is, of course, Israel—the last line perhaps means he makes a big show of friendship and eating dirt for his efforts.

One prediction reads: “The false trumpet concealing madness will cause Byzantium to change its laws.”

Theorists believe that the “False trumpet concealing madness” is Trump and that the reference to Byzantium – an Ancient Greek colony – could be linked to the influx of refugees coming through Greece.

Donald Trump’s anti-immigration stance has been at the centre of his campaign.

Finally Nostradamus writes “the Republic of the big city” will engage in costly military operations, ordered by the “trumpet”, which has led to fears of nuclear war.

The initial explosion would incinerate everything within a ½ mile radius from the point of ignition.

A super-intensive flash of white light would blind anyone who saw it for many miles in all directions (like you were starring into the sun—but much worse).

A radioactive cloud would fill up the sky and slowly move toward Boston.  But the mind-blowing conclusion of the study revealed ”that just a bit further from the epicenter of the blast, such a nuclear explosion would be pretty survivable”.

According to a recent article in the N.Y. Times, the U.S. and their ally South Korea will soon put on a show of united military power for the rulers of North Korea to witness (and hopefully be educated by).
This is in response to the March 3rd sinking of a South Korean warship by a S. Korean submarine. S. Korea has denied N. Korean merchant ships from traveling through its sea lanes, and N. Korea has also terminated al trade with North Korea.

North Korea ended years of speculation, on behalf of many nations, by testing a nuclear device underground. Now it’s for certain–North Korea is new a member of the Asian Nuclear Club!

Timed for maximum political impact–the test occurred on the ninth anniversary of Kim Jong’s-il reign as leader of this Worker’s Party. His neighbors in China, Japan, and South Korea, look at this event as the verification of “bad news” which they had often suspected.

One class of North Korean missiles (the short range ones) can hit targets in Japan, and South Korea, as well as hit some areas of American interest. Longer range missiles are still under development and yet to be deployed.

Despite all the bad news, President Bush is seeking a peaceful settlement to the situation–while also keeping all options open to him as commander in chief. The United Nations is busy seeking solutions at this time.
Major combined naval exercises will begin soon as a blatant show of force to North Korea.

Over 1.5 million people visited the website of the Nostradamus Society of America from 9/11 to 9/13, and the tragic events of 9/11 reminded the world that Nostradamus was a true prophet. 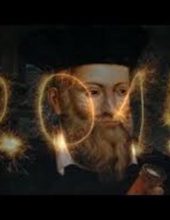