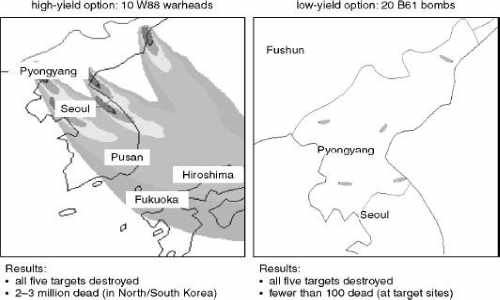 The United States of America has been reviewing possible options for military force to stop North Korea's nuclear weapons program, and a consensus has been arrived at calling for a "Bloody Nose" attack.  But sources in the Intelligence Community have now confirmed to me that this "bloody nose" attack WILL BE NUCLEAR!

The two scenarios being actively discussed are:

1) A High Yield attack using 10 W-88 warheads against five targets resulting in "2-3 Million Dead in North and South Korea,"  OR;

2) A Low Yield attack using twenty B-61 warheads against five targets resulting in "less than 100 dead."

This is what a W-88 warhead looks like and a general description of its internal design: 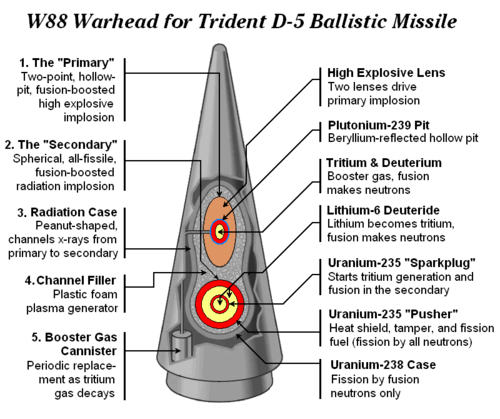 The W88 is a United States thermonuclear warhead, with an estimated yield of 475 kilotons[(kt), and is small enough to fit on MIRVed missiles.  MIRV means Multiple Independent Re-Entry Vehicles – multiple warheads that can each hit different targets, or all hit the same target.

The W88 was designed at the Los Alamos National Laboratory in the 1970s. In 1999, the director of Los Alamos who had presided over its design described it as "the most advanced U.S. nuclear warhead." As of 2014, the latest version is called the W88 ALT 370

This is an image of four actual B-61 Warheads.  These warheads are delivered by aircraft such as the B-2 Stealth or the B-52 Stratofortress and are now designed to be "Penetrator" bombs which slam deep into the ground to blow-up hardened and well-buried targets such as missile silos and underground command and control centers. 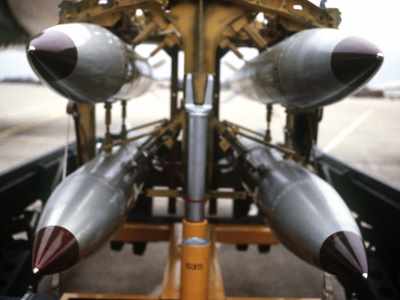 The B61 nuclear bomb is the primary thermonuclear gravity bomb in the United States Enduring Stockpile following the end of the Cold War. It is a low to intermediate-yield strategic and tactical nuclear weapon featuring a two-stage radiation implosion design.

The B61 is of the variable yield ("dial a yield") design with a yield of 0.3 to 340 kilotons in its various mods. It has a streamlined casing capable of withstanding supersonic flight speeds. The weapon is 11 ft 8 in (3.56 m) long, with a diameter of about 13 inches (33 cm). Basic weight is about 700 pounds (320 kg), although the weights of individual weapons may vary depending on version and fuze/retardation configuration.

The US has been quietly amassing firepower in the Pacific during a lull in tensions with North Korea, but recent developments on an under-the-radar nuclear weapon suggest preparation for a potential tactical nuclear strike.

The US recently sent B-2 stealth bombers to Guam, where they joined B-1 and B-52s, the other bombers in the US's fleet. 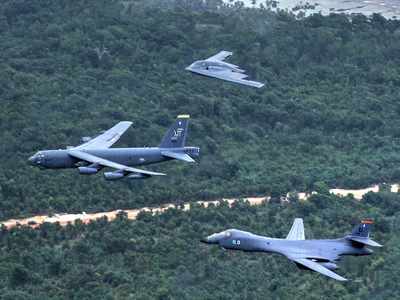 While the B-2 and B-52 are known as the air leg of the US's nuclear triad, as they carry nuclear-capable air-launched cruise missiles, the smaller B-61 nuclear weapon that has undergone some upgrades may lend itself to a strike on North Korea.

The B-61, a tactical nuclear gravity bomb that the B-2 can carry has been modified in recent years to increase its accuracy and ability to hit underground targets, though that version has not yet been deployed.  Each B-2 Stealth Bomber can carry sixteen (16) of these bombs!

Not only will the B-61's new modification make it ideal for destroying dug-in bunkers, the kind in which North Korean leader Kim Jong Un might hide during a conflict, but it has an adjustable nuclear yield that could limit harmful radioactive fallout after a nuclear attack.

Though the US has plenty of nuclear weapons that can easily hit North Korea from land, air, or sea, they're predominantly large ones meant to deter countries like Russia or China.

A 2017 paper in MIT's International Security journal suggested that recent advances in guidance systems and nuclear weapons could allow the US to destroy all of North Korea's nuclear infrastructure while causing 100 or so deaths, versus 2 million to 3 million deaths on both sides of the 38th parallel without them.

In the military science of ballistics, circular error probable (CEP) (also circular error probability or circle of equal probability) is a measure of a weapon system's precision. It is defined as the radius of a circle, centered on the mean, whose boundary is expected to include the landing points of 50% of the rounds. That is, if a given bomb design has a CEP of 100 meters (330 ft), when 100 are targeted at the same point, 50 will fall within a 100 m circle around their average impact point. (The distance between the target point and the average impact point is referred to as bias.)

The new targeting system on the B-61 has increased the accuracy of these nuclear bombs to a CEP of . . . . . less than twelve FEET.

Below is an image nurclear bomb target-accuracy tests at the Toponah Test Range conducted in October, 2015.

The image below is divided in two- the left half is a mirror image of the right half.

In the center is a red dot which is the proposed target (aim point) of a B-61 nuclear strike.

Overlaid around the target is a perfect circle of 30  meters (about 100 feet).

The idea behind this attack is not simply a "bloody nose" but a strike so ferocious and so focused, that it leaves Kim Jung Un unwilling to even THINK of fighting back, never-mind actually TRYING to do so.

The thinking is that the attack would be so terrible – but limited — that Kim Jung Un would instantly understand he faces complete and total annihilation if he dares to do anything at all about the attack.

That's quite a gamble, but on its face, the idea seems to make sense.  The US is being threatened with nuclear attack by North Korea.  They have ignored and circumvented EVERY effort to halt their weapons development, and done so for decades.  It is time they know exactly what they face and see it firsthand in no uncertain terms.

God help us all that we've actually come to this point.  Sadly, I feel we have no other choice.

The recent overtures by North Korea to participate in the upcoming Winter Olypics in South Korea are clearly nothing more than an effort to "stall for time" so they can continue their weapons development and targeting improvement.

The South Koreans are apparently unwilling to see this for what it actually is: a ruse to buy time.

But this morning, North Korea once again slipped and made their TRUE intentions known: Reunification of the Korean Peninsula, under Kim Jung Un Communist Rule.

North Korea issued a statement – seemingly an appeal for reunification.  But this "appeal" came with a very clear warning of their ACTUAL intent:

North Korea has called on "all Koreans at home and abroad" to "promote contact (and) cooperation between North and South Korea".

State media in North Korea also said Pyongyang would "smash" all challenges against reunification of the Korean peninsula.

Koreans are being urged to make a "breakthrough" for unification without other countries' help.

The North's official news agency said military tension on the Korean peninsula was a "fundamental obstacle" to the improvement of inter-Korean relations.

So on the one hand, North Korea is asking for reunification, but their very next words show their true intent: to ". . . Smash all challenges to reunification."

Do you see where this is actually going?

North Korea has never given up on its plan to reunify the entire Korean peninsula under Communist Rule.

The whole purpose of their weapons development for decades has been to prevent the United States from stopping them when they once again invade the South.

Sadly, the South Koreans are so desperate to avoid war, they are ignoring the reality they face.

The US should either make this attack to properly deal with the North Korean threat, or pull all our troops out of South Korea and tell them that since they are so desperate to make a deal with the North, they can deal with the north on their own.  That will serve to sharpen South Korea's focus on what they actually face: Conquest by the Communist North.

In the meantime, I personally URGE Americans to LEAVE SOUTH KOREA and to LEAVE JAPAN within weeks, because it appears to me based upon Intelligence information I am receiving from my former colleagues in the FBI and other agencies, that there __IS__ going to be a conflict and it __WILL__ involve nuclear weapons. 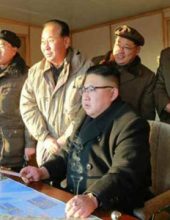