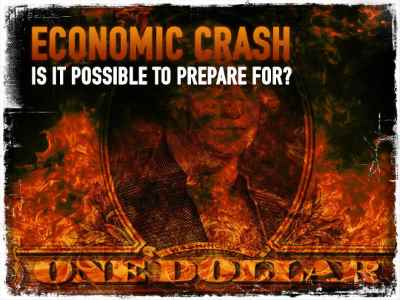 Once a severe financial crisis is evident, governments can close banks, restrict the amount of money that can be withdrawn and enact specific periods for withdrawal of money from banks and other institutions.

If you have money in a bank, you may be unable to withdraw that money for long periods. This happened in the United States in 1933 under the Emergency Banking Act. The above described would not be the only problem the average citizen could encounter once the government enacts certain rules, laws and regulations already on the books once the economy collapses.

Total breakdown of a national, regional or territorial economy and can be characterized as a severe version of an economic depression, which is where an economy is in complete distress for months, years or possibly even decades. The causes are numerous, and typically, many factors are at work that would cause an economic crash.

It does not happen overnight as one would assume because the word crash is bandied about, which would indicate a sudden occurrence. It is more a slow motion decline however.

The why, and when varies depending on whom you ask. The first inclination of many politicians and some so-called experts is to blame someone else for something that may or may not be happening, so getting a straight answer is impossible.

How Do You Prepare

Some are convinced that paper money will be worthless once a collapse occurs. If this is the case then material items will be the new currency, items such as tools, clothing, food products, clean water and skills that can be traded.

Unless the world is destroyed in one fail swoop, each individual as well as communities as a whole will still need things, all the things that paper money had previously allowed people to obtain and this includes paying for the services of others.

Whether you have cash or gold hoarded, for most there probably will not be anywhere to spend it during a collapse. The local grocery store will be shuttered and gas stations will be boarded up and other retails stores will be closed as well.

If things get better, then hoards of cash and gold would be a benefit, but who can afford to hoard cash or buy up gold or silver in any appreciable amounts “just in case” the economy collapses. The problem is the economy may collapse and no one notices it. It is a slow process, which may be upon us and no one is paying attention.

We have become used to high unemployment, the rising prices of consumer goods the rise of food and gas and people have been talking about inflation for years and civil unrest is becoming more common, and so the list of indicators has been with us for literally years and people just shrug.

Everyone has a solution, sell your car, pay off your mortgage, go off grid, pull your money out of the banks, build a bunker and hoard precious metals. Buy more guns and ammo and build a Faraday cage so your toaster and cell phone will work, even though after showing you how to build one they predict the grid will go down, there will not be any electricity.

Most of us live on grid versus living off the grid, and some advocate getting off the grid now. Leave the system, fortify your cabins and then in the same paragraph tell you to take on a second job to fund your off grid living and to get out of debt now as if going off grid would not cost a fortune now. If the entire financial system collapses as some predict who is worried about paying off a loan, and who is left that could collect from you anyway if it gets that bad.

Other say move out of the cities now, but mass migrations do not accomplish anything, because people will always migrate toward others, and toward areas where they can be fed and housed. Soon all you have are metropolitan areas that simply have relocated.

One question is why suffer now when you do not have to. Being prepared is not the same as living now as if things have collapsed around you already. It is merely being ready for when it does collapse.

Prepare but Do Not Panic

A poor economy causes widespread problems and each one can be a crisis in and of itself. Civil unrest, loss of electricity or energy that costs so much the average person cannot afford it. These are the problems caused by a slowing or collapsing economy.

Gasoline/energy may become so expensive you either have to walk to work or simply do not work anymore and heating your home will be financially impossible. Unemployment will rise, causing crimes to go up, because criminals will always be looking to take advantage.

Food will be in short supply, so your stockpiles will have to be replenished by growing your own food and raising livestock. All easier said than done, it all looks good on paper.

Articles by the thousands, tell you what you should do, and some do offer sound advice. Advice such as if your house is on fire put it out, like you would not know this already, but knowing and doing something about it, well you know the rest. You know what you have to do, but can the average person do it.

Who can sell their house or leave their apartment in the city and just take up country life, because cities will be death traps when the economy collapses. Who can pull all their money from the bank and stuff it in a mattress, and who has enough to make it worthwhile to hide cash around the home. A few hundred or even a few thousands will not help you much when the SHTF. Who can buy up gold and silver and hide it in a bunker in the backyard.

Advice is cheap, but actions speak louder than words. You know you need at least a 90-day supply of food and water in the home, but today many can barely afford to have a week’s worth for daily existence let alone any for an emergency. Pay off debt, get a second job, this is good advice, but can you and will you do this to help support what you know you need to do.

Now you know what you need to do, so in the coming segments let us talk about how to get there. How the average person can get there. No broad exclamations on selling your house, paying off your mortgage, or ditching the credit cards and head for the hills with your bug-out-bag. There will not be any doomsday predictions any fear mongering just the facts. Just common sense advice that can be followed or not. Some will be able to while others cannot or simply will not.

Prepping the right way is always hard work, it is slow work and often times if feels as nothing is being done at all, but every wall starts with one stone. That one stone does not make a wall, so you need to continue to lay stones, lay the foundation, because really what choice do you have.

Anyone can give advice, it is easy sometimes to see what needs to be done, but doing it is something all together different.(source)