James Rickards Warns : Banks Are Closing in America – Venezuela is The Future of The United States | Threat Of Dollar Collapse 2017! 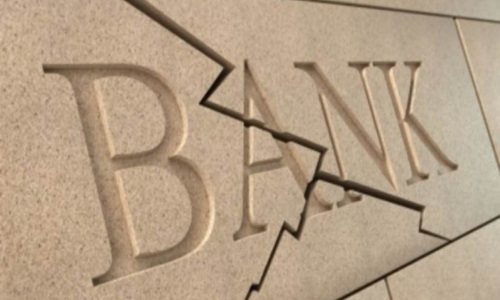 A bank failure is the closing of a bank by a federal or state banking regulatory agency. The FDIC is named as Receiver for a bank's assets when its capital levels are too low, or it cannot meet obligations the next day.After a bank's assets are placed into Receivership, the FDIC acts in two capacities—first, it pays insurance to the depositors, up to the deposit insurance limit, for assets not sold to another bank. Second, as the receiver of the failed bank, it assumes the task of selling and collecting the assets of the failed bank and settling its debts, including claims for deposits in excess of the insured limit. The FDIC insures up to $250,000 per depositor, per insured bank, as a result of the Emergency Economic Stabilization Act of 2008, which raised the limit from $100,000.

The receivership of Washington Mutual Bank by federal regulators on September 26, 2008, was the largest bank failure in U.S. history. Regulators simultaneously brokered the sale of most of WaMu's assets to JPMorgan Chase, which planned to write down the value of Washington Mutual's loans at least $31 billion.


Bank of America, Citigroup and JPMorgan shut 389 branches since the third quarter of last year.

Bank of America, which had over 6,000 branches before the financial crisis has now shrank to 4,629, according to third quarter accounts.  The bank has cut 112 financial centers from last year.

Paul Donofrio, CFO of Bank of America, said the closing of branches was part of a "shift to self-served digital channels, mobile, online, and ATM" in a 3Q earnings call transcript.

According to the 3Q earnings report, the bank has 21 million mobile banking active users and 18% of deposit transactions are completed through mobile devices. "That’s better for customers, it’s also better for our shareholders," said Donofrio. "It’s one-tenth the cost of walking into a branch."

"So it’s a quality versus quantity and making sure we understand," said CEO Brian Monihyan on the earnings call. "I’d say we went from seven million visits probably four to five years ago to six to five. But those five are of a higher quality, and we think that’s important."

Wells Fargo announced plans on Friday to shut down more than 400 bank branches by the end of 2018. That's on top of the 84 locations it pulled the plug on in 2016.
The acceleration of branch closures at Wells Fargo is a reflection of Americans' preference for online and mobile banking these days. Unlike Wells Fargo, its chief rivals Bank of America (BAC) and JPMorgan Chase (JPM) have been a lot more aggressive in shutting branches in recent years.

A prompt corrective action notice (PCA) requires a bank to take immediate actions to address serious managerial or financial deficiencies.  A PCA is a much more serious action than a consent order and is typically issued to a capital impaired bank that is in serious financial difficulty.  A bank issued a PCA is classified as undercapitalized, significantly undercapitalized or critically undercapitalized and operating in an unsafe and unsound manner.  Many of the banks issued prompt corrective action notices are unable to raise additional capital and wind up being closed by regulators.

Closing Banks In USA Will Be Locked Down in The Next Crisis .This is a tough topic, because people either don't won't to believe it or are not capable because they lack the knowledge to comprehend what is being said.

Venezuela and The Threat Of Dollar Collapse 2017! Silver Price will be Astronomical Economic News
Economic Collapse is inevitable the coming collapse of the dollar. because this is the united states people believe this can't happen here. but the economy you have known has been hijacked by the same tactics. Venezuela's path to hyperinflation is the same path as we see the united states on the same path to Dollar collapse. economic news is grim showing signs of economic collapse

Gerald Celente -The Economic Collapse Of China! $30 Trillion Dollar Dark Cloud Of Debt – The US Dollar Is Now Worth Less (Soon To Be Worthless)