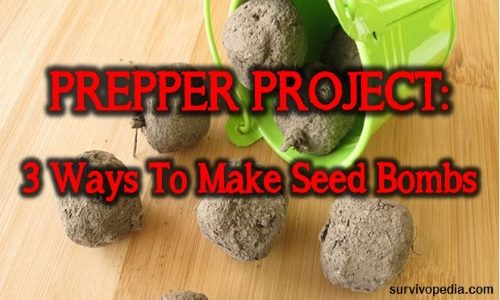 I don’t know about you, dear reader, but I really hate those barren vacant lots on city streets or on the side of the roads, you know what I am talking about? Every single time I pass by these urban wastelands, I fantasize about planting a garden there, in one of those blank lots.

However, in this day and age, I bet it would be against the law and I’d end up raided by SWAT teams, under suspicion of aesthetic terrorism or discrimination against urban decay. Ok, I may sound a little bit dramatic; it’s just for the artistic impression.

Regardless, empty lots are a common problem these days, and plant transplants will end up costing you an arm and a leg if you want to really make a difference.

Enter the latest seed-bomb technology, just for you, the new Captain Planet, the Eco-warrior. Seed bombs are a cheaper alternative compared to buying plant transplants, and as organic and natural as Mother Earth.

The Anatomy of a Seed Bomb

Make no mistake: the bomb particle in a seed bomb has nothing to do with terrorism. This is a bomb that, once “detonated”, will bring peace and harmony, fresh air, beauty, life, the whole nine yards. If I may use a metaphor, the seed bomb can be described as the weapon of choice for urban guerrilla gardeners, as it gets the job done in two shakes of a lamb’s tale.

A seed bomb is fast, precise and laser-accurate! Okay, now that I’ve got your undivided attention, do you know what a seed bomb is? Let’s begin with the seed, which in itself is an amazing thing, as it contains the key that makes life on Earth possible and livable.

The vast majority of plant seeds will require next to nothing for germinating/giving birth to a new plant. In most cases, all a seed will ever need is to get buried in moist soil, safe from direct sunshine or dehydrating winds, and away from predators, insects, or animals that would eat it  instantly…yes, it’s a hard job being a successful plant seed.

Nature mitigates these survival problems by spreading the earth with a huge number of plant seeds, as becoming a plant from a seed is a very risky business.

But there is another way, and that’s where the seed bomb comes into play. Using a seed bomb, you’re basically hiding the plant seeds inside of a ball made from an absorbent material, usually a mix of soil/compost and clay. As the ball dries and its shell turns hard, it becomes very easy to spread the respective balls (these are seed bombs actually) on the barren area you wish to bring back to life. The hard shell of the seed bomb keeps the predators away until the planting time is near.

When the right time arrives, i.e. when it starts raining, the hard coating of the seed bomb will soak up with moisture, releasing its “cargo” (the actual seeds) onto the ground and providing a protective layer which holds the moisture near the seed, helping it germinate and develop into seedlings and then into a new plant. This is an elegant and beautiful concept, don’t you think?

However, this is not a new idea – pretty far from it. Seed bombs were used traditionally by many Native American tribes for protecting their planted corn kernels from predatory birds and drought. About 40 years ago, a Japanese gardener invented clay seed balls as an efficient way for planting his next crop of veggies and grains, but without disturbing what was left from the previous crop.

Seed bombs are the perfect way for planting all types of seed in places that are not very easy to take close care of, such as roadside strips, meadows or stream banks.

Also, seed bombs are a great method for planting grains or veggies without tilling or digging the soil, or for adding patches of color in already established gardens, without disturbing the plants that are already there.

If you’re a free range chicken-farmer, seed bombs will help your newly planted seeds to survive the chicken attack, and, as a plus, seed bombs are really fun to manufacture and to use, especially for kids.

Now, let’s see about the DIY part of the deal, i.e. how to make your own seed bombs.

Instructions: blend the clay, the soil and one part of water together thoroughly and stir vigorously, removing lumps. Add more water slowly, until the mixture has the proper consistency. It should be just like canned molding clay you buy in the store.

In the next step, you put the seeds into the mix and keep kneading until the seeds are mixed in well; if necessary, add more water.

Now it’s the time for building the bombs by taking small amounts of the mixture and rolling them to form a ball about 1 inch in diameter. If the balls tend to crumble, i.e. they don’t hold together easily, just add more water.

Let the seed bombs dry for one or two days in a shady location before storing or seeding them, for example put them inside a cardboard box, but never in plastic containers. They need the open air to dry or else they’ll mold.

After they are dried, you can place them/toss them on your desired location, but remember, don’t add water and don’t bury them. The rest is up to Mother Nature.

Instructions: All the paper must be torn up and the pieces put inside the blender. Add two cups of water into the blender and blend, baby, blend, until everything turns to mush!

Place the strainer over a small receptacle and pour the contents of the blender into the strainer. The filtered “pulp” will be scooped out of the strainer and mixed with the seeds; this is basically the raw material for your seed bombs.

The raw material must be gently mixed and the excess water squeezed out, using the mold or your hands for making the same 1 inch-diameter ball as described in the first recipe.

In the final step, use a paper towel for pressing gently on every seed bomb, to soak any excessive moisture. You want to prevent the seed bomb from germinating prematurely; that would be bad. Now, allow your seed bombs to dry for two days and you’re ready to go. It’s best to store these seed bombs inside paper bags, remember that folks.

Or watch below for the video version about making the perfect tools for guerrilla gardeners and a great way for propagating seeds on a large scale or in not-so-rich soils!

Instructions: Mix one part seeds with five parts sawdust, and add some natural glue to the mix (read my previous article about glue here) along with a little bit of seaweed extract. The mix shouldn’t be too wet, or too dry, but just moist enough to form and keep a ball shape.

Allow the seed bombs to dry out thoroughly for at least a day, by placing them on a sheet of newspaper for example, laid out in your shed or something similar.

Remember to consider the habitat when you’re in the process of selecting the seeds, i.e. do you desire seeds that will build a brand-new habitat or you want to add some variety inside your garden?

Good luck, and have fun folks in your prepping!

About the author : Chris Black is a born and bred survivalist. He used to work as a contractor for an intelligence service but now he is retired and living off the grid, as humanly possible. An internet addict and a gun enthusiast, a libertarian with a soft spot for the bill of rights and the Constitution, a free market idealist, he doesn't seem very well adjusted for the modern world. You can send Chris a message at editor [at] survivopedia.com. 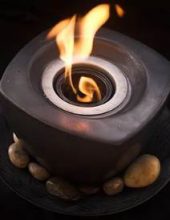 How to Make Gel Fuel at Home for Survival