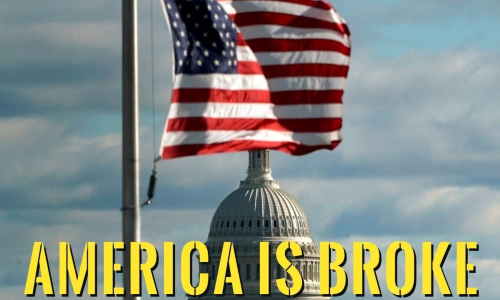 MOST STATES DROWNING IN DEBT

The federal government continues to pile up debt at a staggering rate. In August alone, the US government added $450 billion to the national debt. But Uncle Sam isn’t the only one who doesn’t have enough money to pay his bills. Forty state governments are also drowning in red ink. Total state government debt now stands at $1.49 trillion with 40 states lacking sufficient funds to pay their bills according to Truth in Accounting’s (TIA) Financial State of the States report. “At the end of the fiscal year 2018, 40 states did not have enough money to pay all of their bills.

This means that to balance the budget – as is supposedly required by law in 49 states – elected officials have not included the true costs of the government in their budget calculations and have pushed costs onto future taxpayers.” Unfunded pension liabilities are the primary factor driving the pileup of state debt. According to the report, “One of the ways states make their budgets look balanced is by shortchanging public pension and OPEB (other post-employment benefit) funds.

This practice has resulted in an $824 billion shortfall in pension funds and a $664.6 billion shortfall in OPEB funds.” One main problem is the simple fact that the government was never meant to be this big. Too many people either works for the government or participates in a government give away program. That’s one way that the progressives are trying to crash the system. Simply load it up the federal and state programs to the point of financial collapse. That’s all the “green deal is, a fake program to channel off money from the government, which ultimately comes from the citizens.

Many of the governmental departments need to be either downsized or closed completely. Less government would solve a lot of problems. Yeah, America, keep those corporations healthy, be a patriot, sacrifice your savings account for the good of the many. When George’s bubble burst in 2008, he and his compatriots had filled their pockets a plenty then he skipped town. As each state is going broke, Congress is giving themselves pay raises each year without giving a damn about the trillion dollar debt. I guess there is nothing wrong here, huh? Being corrupt as many there are they are more than happy to purchase more million dollar homes and live long and happy on their free medical insurance/care after they retire. In addition to this we have our military still overseas in Afghanistan, etc., and other federal agencies that need to be slimmed down to a skeleton crew or be shut down altogether such as FBI, CIA, NSA, HS, and The Military Industrial Complex which are sucking up our dollars.

The U.S. is to stop giving billions away to different countries. We need to produce our own energy and stop supporting Saudi Arabia. We have more slums and bad roadways than Saudi Arabia could ever have in 100 years. Re-arranging deck chairs on the Titanic will not suffice, Fellow Serfs! Someone had to borrow at usury to bring that money checkbook balances, bills and coins into existence. The money goes out of existence as the usury and the debt principal are paid back to the bank. These amounts are huge: several billion dollars go out of existence each day.

Actually this money goes into the reserve accounts of the Federal Reserve Banks, out of the hands of the public! This book was first printed in November 1980! The amounts which are withdrawn presently are much larger. If the money is not replaced with new loans, a shortage occurs. Soon individuals and businesses experience serious cash flow problems. These result in more and more loan applications to banks—the only place where money is being created to replenish the supply .

Here is my solution — To Hell with Fractional-Reserve Debt-Based Banking Constitutional Amendment .

#1. Rescind the Federal Reserve Act of 1913 and rename existing Federal Reserve notes and check book balances in all U.S. banking and credit-creating institutions on a 1-to-1 basis as U.S. Treasury dollars and U.S. Treasury-denominated bank balances. All currently existing financial contracts in the Federal Reserve Banking System, including United States Treasury Bonds, remain in effect. Payments of principal and interest on bank loan contracts in existence at the time of enactment of the amendment are distributed at the end of each fiscal year to individual deposit holders at the banking institutions holding the contracts, proportionate to the minimum daily balance and the length of time the balance was maintained during the fiscal year.

#2. Henceforward, credit creation by banking and financial institutions in the United States is prohibited. Loans are required to originate from previous savings of U.S. Treasury dollar notes and U.S. Treasury-denominated bank balances which are to be held in and paid from specific sequestered accounts designated solely for lending by the various financial institutions, with interest charges and term limits to be determined solely by the contracting parties. Non-cash reserves held in the regional Federal Reserve Banks in accounts of the member institutions of the Federal Reserve System no longer form the basis for credit creation and are extinguished via accounting erasure. Cash reserves held by individual banks become the property of the respective institutions. Regional Federal Reserve Banks continue to provide check-clearing operations for the member banks.

#3. Fund the U.S. government directly via Treasury-issued currency authorized by the Congress in its yearly federal budget. The borrowing of money from banking institutions to pay for federal government expenditures, including the issuance of Treasury Notes and Bonds to the Federal Reserve system of banks, financial institutions, or individuals, is prohibited. All outstanding Treasury Notes and Bonds are henceforward redeemed at maturity via payment with U.S. Treasury Notes.

#4. Abolish the Federal Income Tax on individuals, corporations, and business enterprises while maintaining a social security tax on individual incomes, and institute a federal sales tax with a varying yearly tax rate adjusted by the U.S. Congress in session, the sole aim of such adjustments being to maintain a stable or decreasing Consumer Price Index based on data collected by the Federal Government. Any such sales taxes taken in by the Federal Government are extinguished from the currency supply to keep the Consumer Price Index stable or decreasing and are not utilized for further funding. The Sixteenth Amendment to the U.S. Constitution is hereby rescinded.

#5. Clause 1, Article 1, Section 8 of the U.S. Constitution is amended to read as follows: The Congress shall have Power To collect Customs Duties on imports, uniformly applied throughout the United States.

#7. The adoption of this amendment does not prohibit the use by the citizens of the United States of any alternative currencies they should choose to use in their private or commercial transactions.

Ron Paul Warning: The Dollar Will CRASH – The Banking System Is BANKRUPT! Financial Martial Law In Progress! Prepare Yourself!