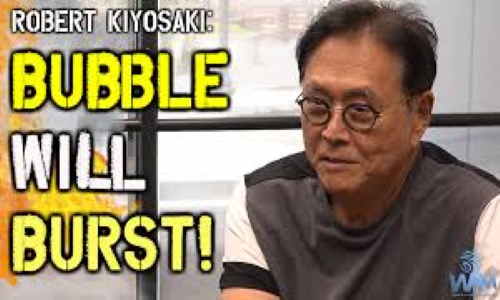 Robert Kiyosaki always says that the big mistake is so many people believe it’s essential to save. That’s ridiculous, Kiyosaki explains; and the reason that’s ridiculous is that what happened in 1971 is crucial. In 1971 the US dollar stopped being money. In 1971 the US dollar became a currency. And what that meant is Richard Nixon in 1971 took us off the gold standard.

That’s like giving an alcoholic free rein to the bar, or it’s like giving somebody who can’t control their spending unlimited credit cards. What’s happening is all the savers today are losers. You know the problem with 1971 is that the federal government keeps printing money. The value of your money keeps going down. If you notice as the value of the dollar goes down, prices go up. They call this inflation. But really what it is; is the dollar’s value coming down. So savers are getting wiped out today. To save money, that is not the new rule that’s an old rule. A very big problem for most people is to stop using the word save and use the word hedge. You’ve got to hedge your money. Hedge against losses.

That’s why this idea that you’re going to tell people you need to save money; that’s really an obsolete idea. Because the concept went obsolete in 1971, the US dollar in the last few years has lost almost 80% of his purchasing power. This has happened throughout history. It happened thousands of years ago with the Romans, with the Greeks, with the Germans, with the English, the Japanese, and the Chinese. Every time they’ve made money into a currency, something you could print at unlimited. Every time they have that has happened, the currency has gone to its true value, which is zero. I am afraid as this economic volatility continues, the savers who will operate in by the old rules of money are just going to get wiped out because the purchasing power of their dollar is going to go down. You can’t keep up with the bank’s printing money.

That’s the old rule of money; is saving money. And the new rule is a hedge. The reason 1971 is such a critical time, was because the US Federal Reserve became the bank to the world. They could print as much money as they wanted. Never in the history of the world has anybody been allowed to print money for the rest of the world. Every time people have done this, chaos is broken out. And that’s why there’s chaos in the world today. In 1913, when the US Federal Reserve Bank was created, they were basically allowed to print money for the world. Every time that has happened throughout history, a despot has arrived; for example, in 1933, a man named Adolf Hitler rose to power when the Weimar Republic was allowed to print as much money as it wanted to do. And when Russia’s currency broke down; a man named Lenin rose to power. When the Chinese economy broke down, Mao Zedong rose. Today we’re at that critical point right now. One of the causes of it was in 1933.

This thing called the US Federal Reserve, was created. They’ve done a pretty good job of making the rich richer; unfortunately, the poor getting poorer. So that’s why when I talked to people, I really need them to understand the new rules of money, which really began to take effect in 1971 when we were allowed to print money for the rest of the world. It understands that this system here is causing the rich to get richer and the poor and middle-class to get poor. But most importantly, the lower middle class is almost getting wiped out. High prices, volatilities in the market, food getting more expensive, gas getting more expensive, savings getting wiped out, home values going around. And the reason the troubles have started again is the US Federal Reserve Bank is not US; is not federal, and does not have any Reserve, and is not a bank.

So if you understand that, then you can start to hedge your position rather than save money, and that’s a new rule of money. This is WHY BANKS ARE THE WORST PLACE FOR YOUR MONEY! Get your money out of the Banking system . NOW. Welcome to The Atlantis Report. Leaving all your money in a bank account; That is terrible advice. I’m going to explain to you guys why putting all of your money in the bank is a guaranteed way to lose money because of inflation.

So first of all, what exactly is inflation?
The definition of inflation is a general increase in prices and fall in the purchasing value of money over time. So over time, your money is worthless as far as buying power. A perfect example, let’s look at the cost of bread in 1930 compared to the cost of bread today. So in 1930, you paid nine cents for a loaf of bread, while today, on average, you’re paying $2.50 for that same loaf of bread. So the purchasing value of your money decreased significantly from 1930 to 2019. I want you to understand. Your parents are not intentionally giving you bad advice by telling you to save money in the bank account. They are just confused because this is a strategy that worked for them.

What most people do is they leave their money in a checking or a savings account. The average return on a checking account is 0.05%. So 100,000 in 2016 at 0.05% per year, would be 100,250 dollars by 2021. So while it appears that you made 250 dollars, you actually lost 11,245 dollars because inflation out-paced you. I have news for you. The 1980s are over. Anyways, how can you out-pace inflation? How can you avoid losing the buying power of your money? The answer is to invest. So I just wanna show you one way that you could invest, and this is a very conservative way. So the S&P 500 is a good way to track the average returns of the stock market. And you can invest directly in a fund that tracks the S&P500 as well. So I know a lot of people out there will say things like the stock market is a losing game, or everyone loses money in the stock market. But just to show you that that’s incorrect, from 1928 to 2016, the S&P; 500 Index had a profitable year 74% of the time.

Now, there may be short term corrections where you are down on your money, but you don’t sell. You just hold on, and you continue investing. The best strategy when you’re investing is dollar-cost averaging. So if you wanted to invest in the S&P 500 Index if you were investing in a fund that tracked the S&P 500, you might deposit the same amount every single month into a fund that tracks the S&P 500. So at that point, you’re buying shares at a high price, buying them at a low price, and buying them in the middle. So, as a result, this lowers your average price paid per share. Since 1928, the S&P 500 has returned on average, 9.8% a year.

Putting money in the bank account is a guaranteed way to lose money. It is something that people don’t understand because your parents are trying to help you. But unfortunately, they’re giving you terrible advice by telling you to leave your money in the bank. It’s a guaranteed way to lose money; because you are never going to keep up with the rate of inflation, with what the bank pays in savings and checking accounts. Give a man a gun, and he can rob a bank. Give a man a bank, and he can rob the world.

– Robert Kiyosaki – Get Your Money Out Of The Bank – Prepare For What is Coming!