The Banks in most western nations are vulnerable to bail-ins . Pull you money while you can, the IMF is coming after it. When and not if Deutsche Bank goes bust, it will take down the EU with it , And the rest of the world will follow .

Deutsche Bank is the most important bank in all of Europe, it has 45 trillion dollars in exposure to derivatives, I mean , what entities can cover 45 trillion Euros!!! . Even if only 10% of that total tranche is bad, that’s 70% more than the Fed’s balance sheet. We all know the high-risk derivatives aren’t ‘only’ 10% of total set of dominoes. That half-trillion-dollar ‘bad bank’ thing is basically legalized Enronics . This so called Deutsche Bank – is the equivalent of 500 megaton bomb, and its timer is accelerating to 0… Boom! .

The so called ‘restructuring’ is only about biding time, calming the financial markets (maybe even lulling the market to sleep for a bit). No one wants to look under the hood if they don’t have to , no one did five years ago when the massive problem was already festering and evident. We are in for a rude awakening. The thing with bank-runs is, they usually accelerate before there is a lockout. I’d be surprised if Deutsche Bank has coverage of anything more than 1% of their total exposure. I’ll throw out a number: 200. Yes 200 days before Deutsche Bank runs out of liquidity and the ability to fund its rent on liabilities and closes its doors , maybe another 50 after that before the ECB goes insolvent rehypothecating bonds to bailout Deutsche Bank and needs a bailout in Special Drawing Right (SDR) , though not before bond yields hit the moon and hyperinflation in the Eurozone takes hold. Get your money out ! It is not earning anything at all, and the risk is mounting. If you do not take it out the Banks will steal it .

If Deutsche Bank goes down,it will bring down with it BNP of France ,and you will have about two weeks before the US banks declare an unscheduled banking holiday. There is an ever growing threat of a Cyprus style “haircut” in the US. Few years ago Cyprus closed their banks and when they re-opened accounts below 100,000 Euros were missing 40% and those above 100,000 Euros lost 60%. this is what is called a Bail-In . The European community quickly and quietly passed laws to do the same theft if they deemed it necessary.

The US waited about two months and quietly passed similar legislation. The European community just changed the rules by abolishing any and all deposit insurance. Actually it is worse than that because if the bank is totally insolvent they can take every dollar in the bank , and if that is not enough they can come after the depositors for the balance. With fractional reserve banking allowing banks to loan at 30 times the deposits also means if 1/30 of the loans go sour the bank is barely solvent. If 1/15 of the loans go sour the bank is totally insolvent. What makes this worse is the small banks are already at about 40 to 1 and the big banks are pushing 60 to 1. The last I heard the Federal Reserve Bank that prints our money is at 77 to.

Many were hoping that this coronavirus outbreak would begin to subside, but instead we witnessed an explosion of newly confirmed cases over the weekend. In fact, the number of confirmed cases outside of China has doubled over the past five days. If that number continues to double very rapidly, authorities will be talking about a full-blown “global pandemic” in no time. When I watched a victim suddenly collapse and start to twitch on a subway in Hong Kong, I thought about the sort of panic that would set off if that happened in New York.

When I saw a video of Chinese authorities using butterfly nets to capture sick people, it made me wonder what U.S. authorities might do to round up those that are ill. The level of fear that a full-blown pandemic would cause would transform our society overnight. Even now, Chinese restaurants in Canada are completely empty due to concerns about catching this virus. But once this virus is being spread in virtually every city in North America, many of us won’t want to go anywhere at all, and that would bring economic activity to a complete and utter standstill.

Jim Rickards : 1984 Has Come to China — Economic Collapse 2020 4K You’re probably familiar with George Orwell’s classic dystopian novel Nineteen Eighty-Four. It was written in 1948; the title comes from reversing the last two digits in 1948. The novel describes a world of three global empires, Oceania, Eurasia and Eastasia, in a constant state of war. Orwell created an original vocabulary for his book, much of which is in common, if sardonic, usage today. Terms such as Thought Police, Big Brother, doublethink, Newspeak and memory hole all come from Nineteen Eight-Four.

Orwell intended it as a warning about how certain countries might evolve in the aftermath of World War II and the beginning of the Cold War. He was certainly concerned about Stalinism, but his warnings applied to Western democracies also. When the calendar year 1984 came and went, many breathed a sigh of relief that Orwell’s prophecy had not come true. But that sigh of relief was premature. Orwell’s nightmare society is here today in the form of Communist China…

We just witnessed the third largest single day point drop in U.S. stock market history, and experts are warning that things will only get worse if this coronavirus pandemic continues to escalate. On Monday, the Dow Jones Industrial Average was down a whopping 1,031 points, and it looks like there could be more volatility on Tuesday. In fact, the Nikkei is already down 787 points as I write this article. Of course this sudden decline is being mostly driven by fear of the coronavirus.

1. The “Great Recession”,
2nd Depression caused the treasury to borrow trillions to loan to the large banks to increase their reserves because they were insolvent.

The key words are the banks were insolvent and only the intervention by the US treasury and Federal Reserve Bank kept the entire banking system from collapsing in 2008 , 2009. Obama did this in a way that the taxpayers are on the hook to pay it back. Since 2008 , 2009 ,nothing has changed for the better within the banking system, if anything it has grown worse. As I said before the Europeans no longer have deposit insurance.

The day the US passes legislation to do the same , I suggest you be first at the bank to cash out your account or better yet immediately begin to reduce your account to cash in hand slowly and buy precious metals with that money. The banking system is a house of cards which is being held up by the Federal Reserve Bank who prints money based upon loans they have made to the treasury and big banks. If the big banks go down the Federal Reserve Bank will go down because it will push them way beyond a 100/1 ratio of loans to deposits , and their only solvent loans will be the loans to the US Treasury , who will shortly go broke because all of the deposits of businesses will have been seized and commerce will have stopped.

Why try to save when the deck is stacked so the workers lose everything and will still owe money to pay off the banks remaining debt. So dear friend , get your money out of the banking system as fast as you can while you still can . This was The Atlantis Report .

European Central Bank is floating a ridiculous proposal to introduce “negative interest rates.” Rick Sanchez describes the economic horror that will arise. Meanwhile, the Federal Reserve intends to cut interest rates yet again. Rick Sanchez breaks down what this means about the true state of the economy.

im Rogers : Things are going to be Horrible

In an interview with Money and Markets legendary investor Jim Rogers launched his latest warning to America : things are going to be Horrible he said . the longest bull market run in history, will be short-lived from here on out .

“Later, this year or next year when the economies around the world are getting bad, Mr. Trump is going to blame everything on the foreigners, the Chinese, the Germans, the Japanese, everybody, and then the trade war will come back and then it’s all over,” Rogers said.

When civilization collapses, he predicts, the world will go back to barter.

Urges everyone to have a disaster-preparedness kit containing enough food, water and other supplies to last 72 hours. This is sensible advice, and prepares have a point when they mock those who ignore it. 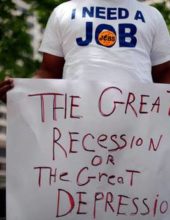 The Great Reset Turns Into The Great Debt Reset !!