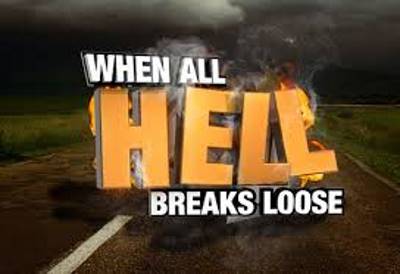 There are many people who just refuse to believe that we are living in the end times.  For whatever reason, they are blinded to all the events unfolding right on a global level—ISIS, Israel, weather, drought, government, economy, disease, natural disasters, and more!

But what if I told you that we may not have ‘years’ as some believe, but, literally months—are you prepared?  I am going to provide for you below a slew of videos, all of them fairly short, discussing different end times events that are upon us RIGHT NOW, and that will show you positively where we are at, and where we are headed! Of course, you may choose to keep your head in the sand about it and pretend it won’t happen, this is up to you.

WE LITERALLY HAVE MONTHS LEFT…NOT YEARS!

You may continue slandering me with your hatred, your lies (misquoting me in articles I have posted, etc.), and your crude remarks, but it won’t matter when these things come upon you.  When it happens, who will you slander at that time?  According to the Bible, you who follow the enemy, Satan, will indeed curse God rather than repent at that time!  All of you who come to harass Christians and say vile, corrupt things…  IF you do not repent soon, here is one of many passages in the Bible which refers to you!  The very tongue with which you curse, you yourself shall gnaw because of your great pain! You will continue blaspheming God because of that very pain in which you shall suffer!  Yet, still, you will NOT repent:

Fifth Bowl: Darkness and Pain—10 Then the fifth angel poured out his bowl on the throne of the beast, and his kingdom became full of darkness; and they gnawed their tongues because of the pain. 11 They blasphemed the God of heaven because of their pains and their sores, and did not repent of their deeds.

And you who belong to the watered down church movement, well, it’s not good for you either. According to the Bible, you will literally be ‘barfed’ from the mouth of God!  I personally do not know what all is involved in such a thing as being ‘barfed’ from the mouth of God. Be it known, it does not sound like something I want to find out about!  Could it mean sucked into some massive sinkhole? A great earthquake? I don’t know.  But here is just one of your many fates which awaits you for watering down and perverting God’s truth! You are the ones who condemn people like me for watching, warning!  You ignorantly rebuke those who are speaking on behalf of God Himself through the power of the Holy Spirit! What you do, you Pharisees, Sadducees, hypocrites and liars is more dangerous than a sinner who does not know the truth! For you would have been better off having never known that to know and do as you are doing! Shame on you and cursed will be your very name!

For it would have been better for them not to have known the way of righteousness, than having known it, to turn from the holy commandment delivered to them.

And, it is also written concerning you:

14 “And to the angel of the church of the Laodiceans write,

‘These things says the Amen, the Faithful and True Witness, the Beginning of the creation of God: 15 “I know your works, that you are neither cold nor hot. I could wish you were cold or hot. 16 So then, because you are lukewarm, and neither cold nor hot,I will vomit you out of My mouth. 17 Because you say, ‘I am rich, have become wealthy, and have need of nothing’—and do not know that you are wretched, miserable, poor, blind, and naked— 18 I counsel you to buy from Me gold refined in the fire, that you may be rich; and white garments, that you may be clothed, that the shame of your nakedness may not be revealed; and anoint your eyes with eye salve, that you may see. 19 As many as I love, I rebuke and chasten. Therefore be zealous and repent.20 Behold, I stand at the door and knock. If anyone hears My voice and opens the door, I will come in to him and dine with him, and he with Me. 21 To him who overcomes I will grant to sit with Me on My throne, as I also overcame and sat down with My Father on His throne.

I tell you now—we ARE the generation chosen to see the unfolding of the end times events! We DO NOT have much longer. If you belong to any of these groups mentioned above, I urge you with everything that I have inside to repent and get right, for the day of the Lord is come upon us!

Thief in the Night?

Alaska Fisheries In the Midst of Major Economic Collapse

INSPIRATION AMIDST THE TRAGEDY

IMPORTANT! Are You Having A Bad Day–A Bad Week? Well, Watch This!