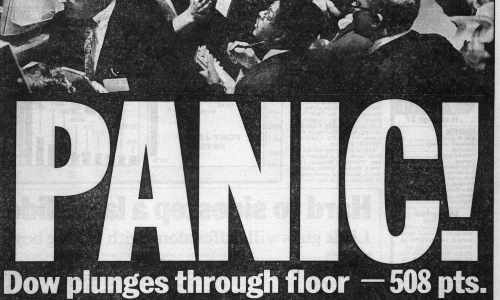 After being on cruise control for months, the stock market hit a giant speed bump on Monday, when the Dow Jones industrial average plunged — tumbling more than 1,500 points at one point after sinking 665 points on Friday.

By the close, the Dow had lost around 2,200 points since Jan. 26, closing in on a 10% decline — which would mark the start of an official “correction.”

So why is the stock market suddenly starting to plunge?

Chalk this up to a case of “be careful what you wish for.”

On paper, Wall Street should be rejoicing right now — not racing to cash out as investors have been doing lately.

Investors, after all, recently got the corporate and income tax cuts they’ve been clamoring for. The economy is accelerating for real, with U.S. gross domestic product now expanding at a annual pace of more than 3% (after inflation) for three straight quarters.

And for the first time in a long while, it appears that worker wages are finally beginning to lift, with average hourly earnings rising to $26.74 in January — a 2.9% increase over the past year.

This represents the fastest rate of wage growth in nearly nine years, since the end of the Great Recession. And it effectively marks the end of the global economy’s war against deflation, which had been the biggest economic threat since the financial crisis began more than a decade ago.

In theory, these are all bullish developments. Yet stocks are going in the opposite direction.

That’s largely because the natural outgrowth of an expanding economy and rising wages is inflation, which hasn’t been a real threat to the economy in nearly three decades.

Investors now believe it is.

Is inflation really heating up?

Yes. Even though it seems tame right now — the consumer price index is up a modest 2.1% over the past 12 months — there’s a good chance inflation could start to pick up steam.

For example, the labor force participation rate — which measures the percentage of the working-age population that is employed or looking for work — “seems to have hit an upper bound at around 63% and has been bouncing around somewhat below that,” McMillan notes. Even with wages and job creation accelerating, January’s labor participation rate was 62.7%, which is about where it’s been for four straight months.

“This could be a sign that all of the workers available, or close to it, are now working,” he says. And if that’s the case, companies seeking to employ new workers may have to shell out even higher wages to attract talent, potentially pushing inflation up even higher.

That, in turn, could mean that corporate profit margins are about to be pinched.

There’s one other reason why investors should brace themselves for higher inflation.

Jim Paulsen, chief investment strategist for The Leuthold Group, notes that for the first time in this economic recovery, nomimal GDP growth (that is, economic growth before the effects of inflation are stripped out) exceeds the national unemployment rate.

When the that happens, “history suggests wage pressures are finally likely to intensify more than most anticipate this year,” Paulsen says.

Are there other reasons to worry?

Yes. It’s not just the threat of rising inflation that investors fear. Wall Street is also worried about what the Federal Reserve might do in response.

“The catalyst isn’t fear of a growth slowdown; it is fear of too much growth and surging bond yields,” says Jeffrey Kleintop, chief global investment strategist for Charles Schwab. “An overheating global economy could mean a more rapid shift by central banks to rein in stimulus” — typically by raising interest rates rapidly.

And rapid rate hikes in an overheating economy is “often a precursor to a recession and a bear market,” he notes.

Already, in anticipation of higher short-term rates, investors have driven longer-term interest rates higher. Yields on 10-year Treasury notes, for instance, reached as high as 2.86% on Monday, up from 2.40% at the start of the year and 2.03% in September.

Does the new Fed chief have anything to do with the sell-off?

It’s hard to blame any of this on new Federal Reserve chair Jerome Powell. After all, he was just sworn in as chairman of the U.S. central bank on Monday afternoon. And the sell-off began well in advance.

However, the markets have historically had a knack for testing new Fed chairman at critical junctures of the economy.

Investors will recall that Alan Greenspan became Fed chairman in August 1987, as the central bank was already hiking rates toward the end of a long economic expansion. That transition took place just weeks before the October 1987 market crash, in which stocks lost nearly a quarter of their value on a single day.

Ben Bernanke similarly assumed the Fed chairmanship in 2006, at the end of another cycle in which housing and stock prices were greatly inflated. About a year later, the stock market entered into a bear market in which equities lost more than half their value.

Powell will preside over his first Federal Open Market Committee meeting in March, at which point investors will be parsing his every word to see if he plans to be any more aggressive in raising rates than his predecessor Janet Yellen. Odds are, he’ll try to stress continuity and plan to raise rates only gradually.

“He certainly would rather not start off with a calamity like the one Fed Chairman Alan Greenspan had to deal with just two months after he started his new job on August 11, 1987,” noted Ed Yardeni, president and chief investment strategist for Yardeni Research, in a recent note to investors.

What can investors do now?

First off, don’t panic. Market corrections of 10% or more are frequent occurrences, and the vast majority of stock corrections don’t turn into full-fledged bear markets, defined as losses of 20% or more.

In other words, this is not the time to undo your entire investment strategy.

What you can do is look to shore up some ballast for your portfolio. James Stack, president of InvesTech Research, recently told MONEY that as the market gets choppy, it’s important that investors “don’t ignore the more stodgy sectors, like consumer staples,” which aren’t sexy but offer diversification in difficult times, says Stack.

What’s more, make sure you own “safe” bonds — like Treasury debt, which is considered a safe haven in times of trouble — rather than reaching for low-quality but high-yielding corporate bonds.

Historically, when the nominal GDP is growing faster than the unemployment rate, “adding commodities to a stock portfolio has significantly enhanced its performance profile,” Paulsen say. “Moreover, allocating some portion of the equity portfolio to commodities reduces overall portfolio risk.”