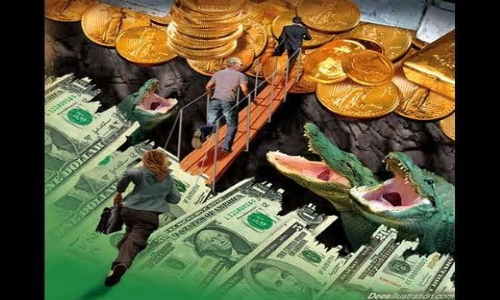 economic Armageddon, ollapse of Everything Is Nigh

A group of influential economic experts has discovered what they call a” frightening pattern” that they say will be unlike anything ever seen. They have presented their findings to the U.N. and a long list of world governments and indicate that this collapse could happen before the November elections in the U.S.

One member of the team, Chris Martenson, stated, “We found an identical pattern in our debt, total credit market, and money supply that guarantees they’re going to fail. This pattern is nearly the same as in any pyramid scheme, one that escalates exponentially fast before it collapses. Governments around the globe are chiefly responsible.”

“And what’s really disturbing about these findings is that the pattern isn’t limited to our economy. We found the same catastrophic pattern in our energy, food, and water systems as well. For 30 years – from the 1940s through the 1970s – our total credit market debt was moderate and entirely reasonable,” he says. “But then in seven years, from 1970 to 1977, it quickly doubled. And then it doubled again in seven more years. Then five years to double a third time. And then it doubled two more times after that. Where we were sitting at a total credit market debt that was 158% larger than our GDP in the early 1940s… By 2011 that figure was 357%.”

“Most frightening of all is how this exact same pattern keeps appearing in virtually every system critical to our society and way of life,” Dr. Moors stated. “It’s a pattern that’s hard to see unless you understand the way a catastrophe like this gains traction. At first, it’s almost impossible to perceive. Everything looks fine, just like in every pyramid scheme. Yet the insidious growth of the virus keeps doubling in size, over and over again – in shorter and shorter periods of time – until it hits unsustainable levels. And it collapses the system.”

Fitz-Gerald says, “If our research is right, Americans will have to make some tough choices on how they’ll go about surviving when basic necessities become nearly unaffordable and the economy becomes dangerously unstable. People need to begin to make preparations with their investments, retirement savings, and personal finances before it’s too late”……

The perfect dictatorship would have the appearance of democracy, a prison without walls in which the prisoners would not dream of escape. A system of slavery where, through consumption and entertainment, slaves would love their servitude. Welcome to The Atlantis Report . Low interest rates are destructive, especially when coddled and promoted. They breed over leveraging and misallocation of resources. Central Bankers are painting themselves, and us, into a corner… No fair return on savings, all time elevated stock market which faces economic headwinds… So the Central Bankers, having painted themselves and us into a corner do what! They ask for more paint…. The fed put itself and us in a box we can’t get out of without a great deal of pain. Keeping interest rates at zero and soon negative , will result in consequences, disastrous consequences.

Personally I think the next depression will be far worse than 1929 because there wasn’t an entitlement society back then like we have today. Today’s generation will react much differently than they did back then , with violence nationwide, riots and quite possibly a civil war. and don’t forget the Fed Chairman’s promise (Bernanke) who started all the QE. when things get better, we will retrieve the QE and shrink the balance sheet…… Sure you will. unemployment 3.5% and stocks near record highs and interest rates at 4000 year lows….. are they reducing the balance sheet as promised?

No, they are cutting rates! They are pumping money into an unexplained Fed Funds situation which likely will be identified as the precursor of a major event. The idiocy will be recorded in later financial history books. The feds QE into infinity will precipitate the collapse of the dollar and subsequent depression.The fed will debase the dollar and cause hyperinflation and the ensuing calamity will be apocalyptic. It will be worse this time because we are headed to an inflationary depression rather than a deflationary one. At least until the last deflationary one, the average person may not have had much money, but what money he did have actually bought more stuff. In the coming inflationary one, the dollars you do have will buy less, so the average mans standard of living will go down even more. Countries accumulated more debt than they can ever repay .

Corporations accumulated more debt than they can ever repay . Consumer accumulated more debt than they can ever repay .
This time around you will not be able to bail out the corporations without bailing out all consumers. What happens to money when you must print to keep humans from rising up and destroying the elites ? What happens to the elites when the consumer figures out they were played for fools and the entire surveillance state was built in anticipation of the big collapse that’s coming . The non 1% is very close to collectively waking up, it will make the Arab Spring look calm and peaceful . The Monetary inflation, a derivative of QE and money printing, has been going on since the the advent of fiat paper money, to sustain perpetual poverty, & force serfs to work to survive, thereby effectively giving the money printers the power to hold the advantage of bargaining, trade, & commerce.

Which of course results in low wages, price controls, monetary value control, legal oppression through bribing state & federal employees to write laws, & because they can print money infinitely, they can purchase, own, & control everything under the sun, globally. Basically it’s the Quintrillionaires vs the Nillionaires , because the serfs don’t have money. Global Neo-Serfdom in short. The difficulty now is that the measuring yardstick all these years was gold, and now its price is totally distorted out of reality; and even if gold is taken as a yardstick, its demand is not what it used to be: there is a whole generation that does not understand its utility, and therefore it does not want to buy or hold it. Add to this the infinite quantity of “money” generated out of every hole in the banksters’ body, all those “derivatives” and all. Since the manufacturing capacity of the countries have become incompatible and not comparable in any standard way, supply side calculations are also distorted.

The normal way out of a depression is either the 0.1% buys all the assets in the country, and take the people into serfdom, or the 99% demolishes the castle walls, introduces a new currency and resets the money market. We are opting for the first. I do believe the serfdom has been perpetual, the bankers sustain it, & the castle can no longer protect the local serfs because of growing immigration & street terrorism.

The pretty & rather large corporate buildings will continue to become vacant, unused, & randomly ransacked by the serfs & foreign serfs till everyone begins to see the result of neo-feudalism is only ever more poverty for all. Obviously the banks can’t feasibly continue to bailout the Zombie Corps which add little or no value. The bankster pricks didn’t learn their lesson because the CDO’s are being used now more than they were in 08 and when that bitch pops it’s over. There won’t be any bailouts for the banks this time around either so they’ll all go bankrupt. There won’t be any need in running on the banks either. When the currency is debased to the point of worthlessness what’s the point in doing a bank run .

Those who ignore history are doomed to repeat it”. People just can’t seem to get that. One thing I’ve noticed, in keeping up with not only how this is playing out in the US, but also in other developed countries, is that there seems to almost be a spell cast upon central bankers, money managers, and politicians, which is leading each and every one of them down the same path. It’s almost like an orchestrated evil is at work, pulling the strings of these puppets, accomplishing its will. This does not end well is one thing I’m sure of. Prepare accordingly, if preparations of that magnitude are even possible. I wish everyone the best of luck, because this is going to be a bitch.

This time it is going to be Apocalyptic financially. Some how we have thousands of more subprime loans, defaulting home, auto and student loans now than were issued in 2008. It’s crazy. And we have more market manipulation. Fiat is about to die for a very long time after this. This is going to be so big that I can’t even wrap my head around the consequences yet. We are moving towards an economic Armageddon that will shake the world to its core.

One of the central pillars of preparedness is being able to feed yourself. Preppers focus some of their attention on stockpiling food as well as creating renewable sources like gardens or livestock (chickens and rabbits) as protection against the possibility that the local grocery store is no longer able to provide something to eat. The average person it has been said only has about 3 days’ worth of food in their homes and if that is true, feeding your family in certain disasters could prove to be possibly your biggest problem.

We have already seen time and time again, scenes of grocery store shelves stripped clean anytime there is a concern in the public. Venezuela was just the most recent example of this behavior preppers warn against. Starvation would surely be a horrible way to die and it seems as though collectively we all consider this a threat that must be dealt with to ensure the safety of our loved ones. The question is how you will deal with the risk of not being able to feed your family. Will you stock up on food now while you are able, or will you try to swim through the crowd of potentially thousands of other people raiding the local grocery store in the hopes that you can secure enough food to last your family though whatever disaster you are facing?

What happens when we start to starve?
The more food you have, the better off you will be in a collapse scenario where we have no hope of the lights coming back on. Gardens and livestock greatly add to this cumulative total you have, but unless you have a very productive garden or a large supply of animals, the food you have on hand is likely to start running out. At some point in time, if the supply of food is interrupted, rationing might be a consideration you need to make.

We talk about food storage as a solution to the grocery stores closing, but that will only buy us time in a true collapse. Yes, it will help your family tremendously to have additional food stocked up, but it will run out if the crisis lasts long enough. When calories are seriously limited, health starts to decline.