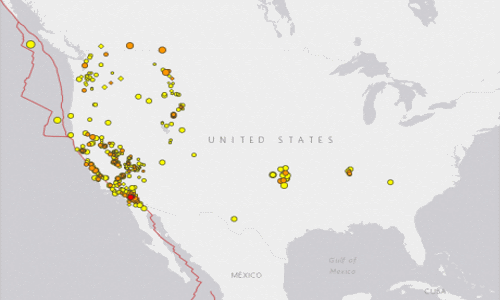 Within the last 7 days, 134 earthquakes “have hammered a three-mile stretch around Monterey County on the San Andreas fault”.  17 of those earthquakes were of magnitude 2.5 or greater, and many believe that these quakes could be a warning sign that a much bigger quake is imminent.  Let’s hope not, because when the “Big One” finally strikes California we will witness devastation on a scale that is unlike anything that we have seen before in modern American history.  The Northridge earthquake of 1994 was crippling, but it was only a magnitude 6.7 quake.  Experts tell us that when the “Big One” finally hits, we could be looking at a quake of magnitude 9.0 or greater, and such a disaster would make the Northridge earthquake look like a Sunday picnic.

The San Andreas fault stretches for more than 700 miles along the California coast, and in a previous article I discussed how seismologists have warned that it could potentially “unzip all at once”.  There is a reason why it is one of the most famous earthquake faults in the entire world, and all of the shaking that we have seen over the past 7 days has many scientists deeply concerned…

In the last week 134 earthquakes have hammered a three-mile stretch around Monterey County on the San Andreas fault.

It follows fears raised last week that the ‘Big One’ is about to hit after a series of ten ‘mini quakes’ struck the same area.

Let us hope that forecast about “more tremors” is wrong, but those that study these things do acknowledge that the probability of a very large earthquake goes up once we start seeing a bunch of smaller quakes.  For example, in a previous article I included the following quote from the director of the Southern California Earthquake Center…

‘Any time there is significant seismic activity in the vicinity of the San Andreas fault, we seismologists get nervous,’ Thomas Jordan, director of the Southern California Earthquake Center, told the LA Times last year.

‘Because we recognize that the probability of having a large earthquake goes up.’

And Mac Slavo recently pointed out that USGS seismologist Dr. Lucy Jones has warned that the “Big One” is way overdue…

Seismologist Dr. Lucy Jones, from the US Geological Survey, warned in a dramatic speech that people need to act to protect themselves rather than ignoring the threat. Jones said people’s decision not to accept it will only mean more suffer as scientists warn the ‘Big One’ is now overdue to hit California. In a keynote speech to a meeting of the Japan Geoscience Union and the American Geophysical Union, Dr. Jones warned that the public is yet to accept the randomness of future earthquakes.

People tend to focus on earthquakes happening in the next 30 years but they should be preparing now, she warned. Jones said there are three key reasons why the peril is so frightening – it cannot be seen, it is uncertain, and it seems unknowable. This means people bury their heads in the sand and pretend it won’t happen when they should be prepared and soon for the “big one.”

Of course the shaking that we are currently witnessing in California is far from isolated.

All over the planet we are seeing some very unusual things happen right now.  For example, an enormous volcano in Iceland that has not erupted in 290 years is starting to come to life…

A massive ice cauldron measuring one km in diameter has formed at the epicentre of the Öræfajökull volcano.

Stunning satellite images taken during a flyover of the region show the new ice cauldron has developed within the volcano in the last week.

This suggests that activity at the volcano, located in Vatnajökull, Iceland’s largest glacier, is increasing, according to the Icelandic Met Office (IMO).

And officials in Indonesia are warning that Mt. Agung may be about to experience a major eruption for the first time since 1963.  The following comes from TruNews…

Indonesia’s Mt. Agung volcano on the island of Bali has erupted, prompting officials to prepare for possible mass evacuations from the popular tourist destination.

Indonesia’s National Disaster Mitigation Agency was already warning residents and tourists to stay away from an exclusion zone of roughly five miles around the crater. Their warning states the eruption could result in ash clouds that “severely disrupt air travel,” or cause disastrous environmental hazards.

While a main blast has not yet occurred, officials believe it is likely to happen soon. The last such eruption occurred in 1963 and resulted in the deaths of more than 1,000 people.

As I have said so many times before, it appears that the crust of our planet is becoming increasing unstable.  This is especially true along “the Ring of Fire”, and the fact that the section of the Ring of Fire that runs along the west coast seems to be awakening should be a major red flag for all of us.

They don’t know exactly when it will happen, but scientists assure us that it is just a matter of time before an absolutely catastrophic earthquake strikes the California coast.

So do you believe that this is a major threat?  Please feel free to tell us what you think by posting a comment below…

Disaster preparation has received a lot of attention in the recent past. In fact, people who live in every corner of the world prepare for various disasters such as famine and war. Some of them even prepare for zombies. It is always better to prepare to face disasters as they can hit us at unexpected times. However, it should be done according to a plan. That’s where The Lost Ways comes into play. This guide follows a scientific approach to help people prepare for disasters. In fact, it would let people know about the secret methods followed by the ancestors to survive disasters. They include a variety of disasters such as droughts, diseases, financial crisis, wars, famines and everything else life threw at them. For More Information about Old Time Wisdom Survival Guide Click Here

Michael Snyder is a Republican candidate for Congress in Idaho’s First Congressional District, and you can learn how you can get involved in the campaign on his official website. His new book entitled “Living A Life That Really Matters” is available in paperback and for the Kindle on Amazon.com.