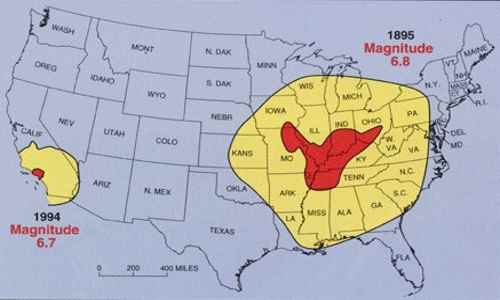 Most Americans expect the next great earthquake in the United States to come on the west coast. But what if it strikes right down the middle of the country instead? The New Madrid fault zone is six times larger than the San Andreas fault zone in California and it covers portions of Illinois, Indiana, Ohio, Missouri, Arkansas, Kentucky, Tennessee and Mississippi. Back in 1811 and 1812, a series of absolutely devastating earthquakes along the New Madrid fault zone opened very deep fissures in the ground, caused the Mississippi River to run backwards in some places, and were reportedly felt as far away as Washington D.C. and Boston. They were the strongest earthquakes ever recorded east of the Rocky Mountains, and scientists tell us that it is only a matter of time before we experience similar quakes. In fact, the U.S. Geological Survey has admitted that the New Madrid fault zone has the “potential for larger and more powerful quakes than previously thought“, and the number of significant earthquakes in the middle part of the country has more than quintupled in recent years. Someday, perhaps without any warning, an absolutely massive earthquake will strike the New Madrid fault. Thousands of Americans will die, tens of thousands of structures will be completely destroyed, and millions of people will find themselves homeless.

Unlike on the west coast, buildings within the New Madrid fault zone are typically not constructed to withstand major earthquakes. If we were to see the type of earthquake that we saw a little over two centuries ago, it would be a disaster unlike anything that any of us have ever known. The following comes from WKRN, and it describes what those earthquakes back in 1811 and 1812 were like…

Can you believe that in the winter of 1811-1812 a series of earthquakes in northwest Tennessee shook the ground so hard that church bells rang on the East Coast and sidewalks cracked in Washington D.C?

The sitting president, James Madison, was even awakened in the middle of the night by the shaking of the White House.

In Tennessee, and surrounding states, the early settlers and Native American Indians were terrified by the shaking. Large fissures opened up in the ground, and some witnessed the Mississippi River appearing to flow backwards.

It is believed that those quakes shook an area ten times larger than that impacted by the 7.8 San Francisco earthquake of 1906. Some of the giant cracks that opened up in the ground were up to five miles long, and the stench of fire and brimstone hung in the air for months afterwards.

Fortunately, the middle of the country was not heavily populated in 1811 and 1812, so the overall amount of damage was not that great. The following comes from Smithsonian.com…

The Midwest was sparsely populated, and deaths were few. But 8-year-old Godfrey Lesieur saw the ground “rolling in waves.” Michael Braunm observed the river suddenly rise up “like a great loaf of bread to the height of many feet.” Sections of riverbed below the Mississippi rose so high that part of the river ran backward. Thousands of fissures ripped open fields, and geysers burst from the earth, spewing sand, water, mud and coal high into the air.

Needless to say, if such a disaster happened today the damage would be absolutely catastrophic.

This is something that government officials have studied, and their conclusions are rather sobering…

In a report filed in November 2008, the U.S. Federal Emergency Management Agencywarned that a serious earthquake in the New Madrid Seismic Zone could result in “the highest economic losses due to a natural disaster in the United States,” further predicting “widespread and catastrophic” damage across Alabama, Arkansas, Illinois, Indiana, Kentucky, Mississippi, Missouri, and particularly Tennessee, where a 7.7 magnitude quake or greater would cause damage to tens of thousands of structures affecting water distribution, transportation systems, and other vital infrastructure.

Do you remember how traumatized people were when a few thousand Americans were killed on 9/11?

Well, how would the country react to a disaster that killed 100,000 Americans instantly?

A few years ago, the federal government held a major five day simulation known as“National Level Exercise 11″ that attempted to portray what a major New Madrid earthquake would look like…

In May, the federal government simulated an earthquake so massive, it killed 100,000 Midwesterners instantly, and forced more than 7 million people out of their homes. At the time, National Level Exercise 11 went largely unnoticed; the scenario seemed too far-fetched — states like Illinois and Missouri are in the middle of a tectonic plate, not at the edge of one. A major quake happens there once every several generations.

Could you imagine what that would mean for our nation?

In addition to the human toll, financial markets would completely collapse, key infrastructure throughout the region would be totally destroyed, and transportation on and across the Mississippi River would be brought to a standstill. According to international insurance giant Swiss Re, if the 1811 and 1812 New Madrid earthquakes were to happen today, the economic losses alone would be in the hundreds of billions of dollars…

A series of big shakes — of the sort last seen in 1811 and 1812 — would cause about$300 billion in damage, Swiss Re says. The cost would be double the damage from Hurricane Katrina in New Orleans in 2005.

Houses — especially brick ones — would collapse. Buildings would sink sideways into liquefying earth. Bridges might tumble into the rivers. The route of the Mississippi River could change — as it did in the last big quake.

People would die, perhaps by the thousands. Being mainly a property reinsurer, Swiss Re didn’t estimate the human toll.

It is also important to remember that there are 15 nuclear reactors along the New Madrid fault zone.

If a major earthquake did hit the area, we could be looking at Fukushima times 15.

Scientists tell us that there is a very deep “scar” in the earth in this region that makes the New Madrid fault zone “mechanically weaker than much of the rest of North America”. The following comes from Wikipedia…

The faults responsible for the New Madrid Seismic Zone are embedded in a subsurface geological feature known as the Reelfoot Rift that formed during the breakup of thesupercontinent Rodinia in the Neoproterozoic Era (about 750 million years ago). The resulting rift system failed to split the continent, but has remained as anaulacogen (a scar or zone of weakness) deep underground, and its ancient faultsappear to have made the Earth’s crust in the New Madrid area mechanically weaker than much of the rest of North America.

This relative weakness is important, because it would allow the relatively small east-west compressive forces associated with the continuing continental drift of the North American plate to reactivate old faults around New Madrid, making the area unusually prone to earthquakes in spite of it being far from the nearest tectonic plate boundary.

I believe that a major New Madrid earthquake is coming. That is one of the reasons why I included such an earthquake in my novel. Those that choose to live in that region are literally sitting on top of a ticking time bomb, and at some point it is going to blow.

Of course I wouldn’t want to be living on the west coast right now either. The shaking of our planet continues to intensify, and this is going to cause great tragedies in the United States during the years ahead.

The warning signs are all around us. In 2015, the state of Oklahoma shattered their all-time record for earthquakes in a single year, and volcanoes that were thought to be totally dormant are now erupting again all over the planet.

A great shaking is coming to America very soon.

I hope that you are ready.