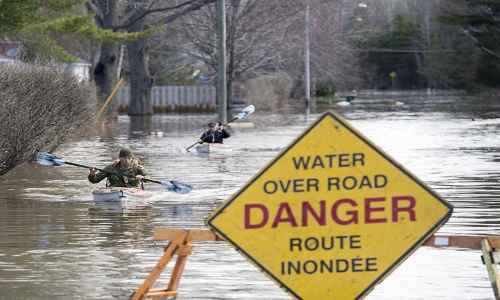 Bomb Cyclone, Flooding To Parts Of The Midwest

Less than a month after a “bomb cyclone” caused a “1,000 year flooding ” in the middle portion of the country, another “bomb cyclone” of similar strength is going to bring even more flooding to the High Plains and Upper Midwest. According to meteorologists, it is being projected that this new “bomb cyclone” will be “similar in intensity and in snowfall” to the last one, and the latest forecast is calling for “more than 30 inches in some areas”.

The floods that we witnessed last month absolutely devastated communities throughout the region, and now it is going to happen again. The middle part of our nation has literally never seen anything like this happen ever before, and this is easily the worst natural disaster to hit the United States since Hurricane Katrina. Before I get into the details of the latest weather forecast, let’s review what we have witnessed so far. “At least 1 million acres of U.S. farmland” were under water for at least 7 days last month, according to Agriculture Secretary Sunny Purdue “as many as a million calves” were lost in the flooding in the state of Nebraska alone, and hundreds of millions of dollars worth of crops were destroyed.

Thousands upon thousands of farmers were financially ruined, and thousands of farmers will not be able to plant any crops at all this year. If you can point out a worse agricultural disaster in the last 50 years in the United States, please feel free to do so. To my knowledge, there isn’t one. And now a second “bomb cyclone” is on the way this week.

According to CBS News, it looks like this “bomb cyclone” will produce “a blizzard of epic proportions”… Some Midwest communities already look like they have literally been through a war. What do you think they are going to look like after another epic blizzard and more severe flooding rips through them? If you will remember, Nebraska was hit by flooding unlike anything it had ever seen before last month. And now we are being told that this new storm “will further exacerbate flooding in Nebraska”… Even before this storm, the National Weather Service was warning that there would be “above-average precipitation across much of the Lower 48” over the next few months and that 200 million Americans were at risk of being affected by flooding. But nobody was expecting another “bomb cyclone” to come so soon.

The damage continues on downstream for people, livestock, homes and businesses. Please keep them all in your prayers.