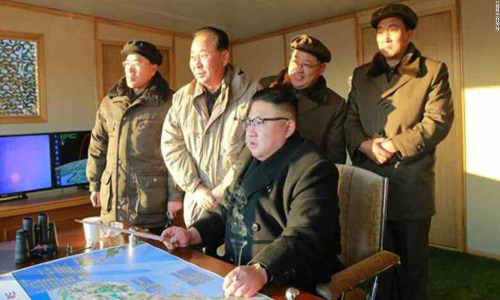 North Korea's ambassador to the U.K. said Wednesday that Pyongyang was willing to pursue a sixth nuclear weapons test at an undisclosed time in spite of military threats from the U.S.

North Korean envoy Choe Il revealed Pyongyang's ambitions to conduct another nuclear test during his first interview since being appointed to the position in November, soon after his predecessor defected. Echoing the official stance of his government, Choe asserted North Korea's right to maintain and develop nuclear weapons as a deterrent to foreign invasion. Though he said he was unaware of a specific date for another nuclear weapons test, he stated that one would be conducted on leader Kim Jong Un's terms regardless of U.S. pressure.

"I can say that the nuclear test will be conducted at the place and time as decided by our supreme leader, Kim Jong Un," Choe told U.K.-based media agency Sky News. 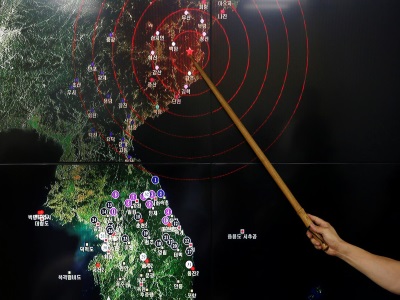 Ryoo Yong-gyu, Earthquake and Volcano Monitoring Division Director, points at where seismic waves were observed in South Korea believed to be caused by North Korea's fifth and most recent nuclear weapons test, September 9, 2016. North Korea has since vowed to pursue a sixth nuclear weapons test despite international sanctions and the threat of U.S. military intervention.KIM HONG-JI/REUTERS

Reports emerged last month claiming the reclusive, militarized state was planning a nuclear test on North Korea's "Day of the Sun," which commemorates the birthday of North Korea's founder and Kim Jong Un's grandfather, Kim Il Sung. President Donald Trump responded by sending a naval strike group to the region alongside vows to prevent Pyongyang from going through with such a test. The nuclear weapons test never occurred, but North Korea has publicly disavowed any foreign opposition to its nuclear program, even from its traditional ally, China, which also has criticized North Korea's possession of weapons of mass destruction.

As the U.S. continues to pressure China to bring its neighbor to the negotiating table, Choe said Wednesday that North Korea was unphased by Trump's threats. He cited Pyongyang's decision to conduct two ballistic missile launches as evidence of the nation's resolve. The two tests ultimately failed, but were condemned by the U.N. Security Council, which passed a U.S.-drafted statement threatening further action if Pyongyang did not end its nuclear program. Choe dismissed the U.S.'s rhetoric as empty because of North Korea's nuclear arsenal, which he said would prevent the U.S. from intervening as it did "in weak countries, including Afghanistan and Libya.

"If the U.S. moves an inch, then we are ready to turn to ashes any available strategic assets of the U.S.," Choe said. 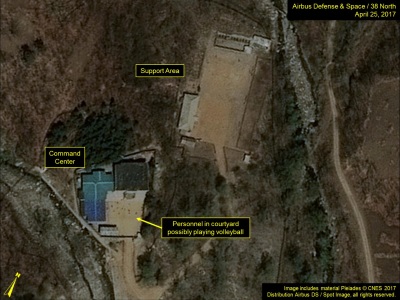 Commercial satellite imagery of the Punggye-ri Nuclear Test Facility, which 38 North says indicates an apparent resumption of activity in North Korea, is seen in this image from April 25 released on May 3, 2017.AIRBUS DEFENSE & SPACE/38 NORTH/REUTERS

Recent satellite imagery has indicated new activity at North Korea's Punggye-ri nuclear test site, a development that U.N. International Atomic Energy chief Yukiya Amano said Thursday gave the agency "concrete information that the nuclear program is going ahead." A report on the site provided by analysts Joseph Bermudez and Jack Liu to North Korea monitoring group 38 North determined that "it is unclear if this activity indicates that a nuclear test has been canceled, the facility is in stand-by mode or that a test is imminent."

North Korea is believed to possess 10 to 20 nuclear weapons and an arsenal of around 1000 ballistic missiles. Kim announced earlier this year that the country was in the final phases of developing an intercontinental ballistic missile capable of reaching the U.S., however, analysts have raised doubts as to how close North Korea is to producing such a projectile and to developing the technology required to fit a nuclear warhead onto it. The nation's current military capabilities, however, put nearby U.S. allies such as South Korea and Japan, both of which host U.S. military installations, at risk of attack. 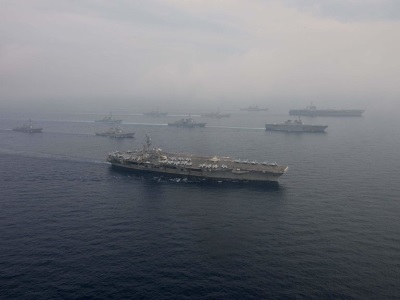 TOKYO — Just days after a flotilla of American and Japanese warships left the sea between Japan and Korea, where they had been deployed in a show of force toward Pyongyang, North Korea tested missiles designed to hit such ships.

The launches Thursday morning of what appeared to be surface-to-ship cruise missiles were meant to demonstrate that the North could repel forces staging a strike on the Korean Peninsula, analysts said.

South Korea’s newly elected president, Moon Jae-in, convened his first national security meeting in Seoul on Thursday to discuss the latest missile tests, which were the fifth the North had conducted since he was elected last month, and the 10th this year.

“North Korea will only face further isolation from the international community and economic difficulties with its missile launches,” Mr. Moon said at the meeting, according to a statement released by the presidential Blue House.

The launches came less than a week after the United Nations Security Council expanded its sanctions against Pyongyang over previous missile tests.

They also came less than 24 hours after Mr. Moon’s administration said it had suspended the deployment of an American antimissile defense system — called Terminal High Altitude Area Defense, or Thaad — that is meant to detect North Korean missiles and prevent them from hitting their targets.

Critics had suggested that the suspension — which appeared to be a concession to China, whose leaders strongly objected to the Thaad system, and a break with the United States on policy toward North Korea — signaled that Mr. Moon was taking a much softer stance toward the North than his predecessors had.

Mr. Moon sought to dispel any such perception on Thursday. In his strongest language on the North since his inauguration, Mr. Moon told the National Security Council that his government “will not step back even one step or make compromises on national security or on the safety of our people.”

Some analysts say that with his decision to submit Thaad to a lengthy environmental review, as well as his recent approval of sending aid groups to visit North Korea, Mr. Moon is approaching North Korea as though its nuclear and missile development had not advanced in the decade since he last served in government. Mr. Moon was chief of staff to former President Roh Moo-hyun, a liberal who pursued a much more open policy toward the North than his conservative successors did. 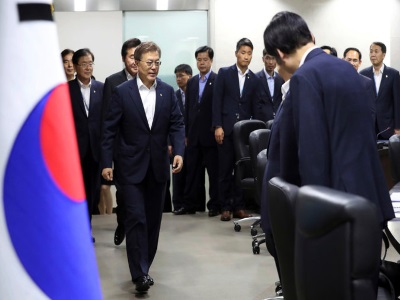 “I understand the administration’s predicament,” said Duyeon Kim, a visiting senior fellow at the Korean Peninsula Future Forum, a South Korean research institute. “It’s always a delicate balance between wanting to resolve things diplomatically and wanting to deal with North Korea the way it is today, as a growing security threat.

“But the fact of the matter is, the Moon administration needs to deal with North Korea with eyes wide open and not be stuck in a decades-old security environment,” Ms. Kim said.

The North has been steadily pursuing missile tests in defiance of United Nations sanctions and international condemnation. According to Kim Dong-yup, an analyst at the Institute for Far Eastern Studies at Kyungnam University in Seoul and a retired South Korean Navy commander, the tests Thursday appeared to be of four-canister missiles on new launchers that were displayed during a military parade in Pyongyang in April.

The missiles flew about 125 miles before landing in the sea between the Korean Peninsula and Japan. Two American aircraft carriers, the Carl Vinson and the Ronald Reagan, as well as Japanese Maritime Self-Defense Force destroyers, had recently been in the area, and analysts said North Korea was clearly showing off its ability to hit warships as well as military bases in the region.

“If the U.S. were to pre-emptively strike North Korea, it would use aircraft and vessels,” said Yang Uk, a senior researcher at the Korea Defense and Security Forum, a research institute in Seoul, South Korea’s capital. “And in these last series of tests, North Korea is showing they can deter those strikes.”

The United States Pacific Command did not immediately comment on the launches, and Japan’s response was muted. Although Foreign Minister Fumio Kishida said the tests “cannot be accepted,” the Japanese government did not register a formal complaint with North Korea.

Analysts said the North Koreans had deliberately avoided testing these particular missiles while the American and Japanese warships were nearby. “The timing was interesting because these U.S. ships and Japanese ships have left,” said Narushige Michishita, director of the Security and International Studies Program at the National Graduate Institute for Policy Studies in Tokyo. “In a way, it wasn’t too provocative.”

But Mr. Michishita said the tests indicated that the North was following a strategic program of demonstrating its ability not only to reach targets further away, but also to prevent strikes against it.

The only missiles that the North displayed in its recent military parade that had not yet been tested were intercontinental ballistic missiles. 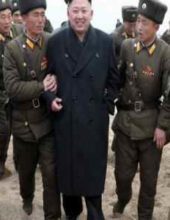