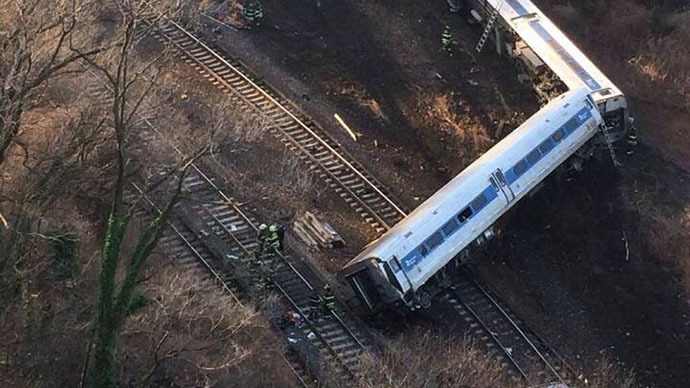 A Metro-North passenger train has derailed in the Bronx area of New York City, with reports of at least 4 deaths and 48 injured, according to reports from NBC.

There is no information yet on how many people were travelling on the train.

The derailment happened just north of Manhattan, near Spuyten Duyvil station, shortly after 7 a.m. Sunday. According to ABC, the train was the 5:54 from Poughkeepsie to Grand Central and was due to arrive into Grand Central at 07:43.

Five cars of the train's seven carriages came off the track about 100 feet north of the station just after 7 am MTA spokesman Aaron Donovan told WCBS 880 radio.

Donovan who was working near the scene of the crash said the noise was so great he thought a plane was coming in.

“I was at my desk at my computer, and I thought a plane was coming in. I jumped away. Then after the noise stopped, I looked out the window and saw the derailment, and I called 911 right away,” he said.

Frank Tatulli, a passenger who managed to get out of the wreck on his own despite suffering head and neck injuries, told WABC radio that he thought the train was travelling faster than usual.

The line involved in the accident serves Metro-North’s Hudson line, which serves dormer towns like Croton-Harmon, Peekskill, Ossining and Yonkers.

Metro North said in a tweet that the service on the line is currently suspended. 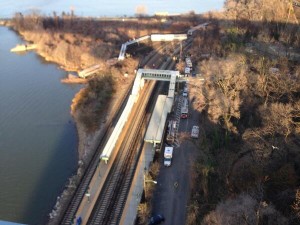 At a court hearing in November following an earlier derailment on the New Haven Branch of the Metro-North railroad on May 17, a railroad official said that maintenance on the network was way behind schedule.

At the National Transportation Safety Board hearing in Washington DC chief engineer Robert Puciloski said the railway was “behind in several areas” including a five year schedule of cyclical maintenance and that there was no system in place to replace retiring workers.

On May the 17 an eastbound train struck a westbound train at Bridgeport injuring 73 passengers, two engineers and a conductor.

And on May 28 a track foreman was struck and killed by train in West Haven. He had requested that the section of the track he was working on be taken out of service.