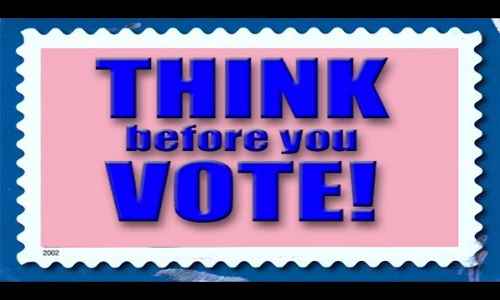 Before You Vote Watch This Video

The 2016 presidential election could be the most scandal-plagued match-up since James Blaine’s allegedly corrupt business deals squared off against Grover Cleveland’s alleged illegitimate child in 1884. On the Democratic side, Hillary Clinton is the nominee, bringing with her a train-car’s worth of baggage. But the Republican candidate is at least as saddled with controversy as Clinton is—and while many of the Clinton cases involve suspicion and shadowy links, many of Trump’s are fully documented in court cases and legal proceedings.(The Atlantic)

The American Action Forum, a right-leaning policy institute based in Washington D.C., estimates that immediately and fully enforcing current immigration law, as Trump has suggested, would cost the federal government from $400 billion to $600 billion. It would shrink the labor force by 11 million workers, reduce the real GDP by $1.6 trillion and take 20 years to complete (Trump has said he could do it in 18 months).

But perhaps most shockingly, Trump proposed slashing the power of the Food and Drug Administration.

“The FDA Food Police, which dictate how the federal government expects farmers to produce fruits and vegetables and even dictates the nutritional content of dog food,” the Trump campaign fact sheet complained.

“The rules govern the soil farmers use, farm and food production hygiene, food packaging, food temperatures and even what animals may roam which fields and when,” the fact sheet continued. “It also greatly increased inspections of food ‘facilities,’ and levies new taxes to pay for this inspection overkill.

I can fill pages of names of craftsmen who were hired by Mr.Trump and were swindled.

I can fill pages of students who went to ‘”Trump University” and were swindled.

How about his famous wall he wants to build. No, Mexico IS NOT paying for it.

The actual cost for the rest of the border wall (roughly 1,300 miles) could be as high as $16 million per mile, with a total price tag of $15 billion to $25 billion. Rosenblum said the $15 billion low-end estimate is "probably an underestimate," because the parts that have yet to be fenced are the most difficult — the most dense and arid. At $16 million per mile and with 1,300 miles to secure, the estimated cost would be $12 billion, and the price of private land acquisitions and maintenance of fencing could push that total cost higher.

The U.S. government would have to pay to maintain the wall, whichcould cost as much as $750 million a year, according to an analysis conducted by Politico. And then if it wanted to man it with personnel, that would be an additional cost — border patrol has an operating budget of $1.4 billion for 21,000 agents.(CNBC)
I suggest that there is one overarching issue that makes the decision easy for me: the Supreme Court.

Trump is likely to appoint justices who will overturn Roe v Wade. If you are someone who likes the law recently enacted by Oklahoma to criminalize any doctor who performs an abortion without any exceptions, you should probably favor Trump. (Thankfully the Governor vetoed that law, but some version of it will probably get enacted.)

That's enough for me right there, but a few others worth mentioning:

Trump has encouraged a return to the use of torture; Clinton doesn't.

Trump has made certain suggestions that show a woeful misunderstanding of public debt. Donald Trump Can Pay Off the National Debt in 8 Years. Clinton and her advisors are competent in this area.

READ MORE : DO YOU KNOW HOW RUSSIAN PRESIDENT PUTIN RULES AMERICA ?- HILLARY CLINTON, KGB SUPERSPY or HOW YOU RECRUIT AND KILL PRESIDENTS”

Main reasons not to vote for Trump:

1 Trump would eviscerate progress on climate change and put the planet in even more danger.
2 His appointments to the Supreme Court would be complete lunatics – theocrats, corporatists and racists. And we’d be stuck with them even after Trump left.
3 With a Republican-dominated Congress, it would be very dangerous to put a President in the White House who might actually sign some of their nutty legislation. A stalemate/gridlock is one thing, going backwards is much worse.
4 Trump is very inconsistent. He says whatever he thinks will play to his supporters – it's impossible to know what he really believes.
5 Building a wall on the Mexican border would be one of the dumbest, most wasteful initiatives ever attempted by the US government. On the longlist, at least.
6 He's racist and sexist. This is well documented.
7 He supports horizontal nuclear proliferation, which makes the world a more dangerous place, much worse than vertical proliferation.
8 He's a tinfoil hat conspiracy theorist, hence his statements on climate change.
9 He has promised to commit war crimes by using torture and going after the families of terrorists.
10 His policies on Islam and Muslims are so discriminatory it's mad.

Reasons to vote for Clinton:

She has a plan on climate change.
She is much less likely to start a nuclear war.
She's far better qualified for the role


Hillary. And I say this as someone who was almost entirely committed to getting Bernie Sanders elected. I’m definitely not happy with Hillary’s winning of the primary (and make no mistake, the primary’s basically over), but after years of reading about her and looking back on her history (I was around during the 2008 election too), I’ve concluded that she’s no more corrupt or two-faced than any other politician on the Hill. In addition, she’s at least more likely to pass progressive legislation than Trump is (she’s already committed to raising the minimum wage, pushing for clean energy jobs, and reducing college debt). She may not truly be a liberal/progressive, but her victory would likely usher in a liberal Congress that would make her more liberal (a liberal Congress also pulled Obama to the left by 2012). Just imagine living in a country where people of color, women, and queer folk are protected, the economy continues to grow, and climate change and terror are addressed pragmatically and without pretense. Hillary may not be the best person to do that, but she’s the best of the two (and there are really only two) options that we have.

That might not sound like a glowing endorsement, but it’s more than I can say for Donald Trump. Donald Trump is the logical endpoint for a horribly corrosive and bitter politics, the politics that my parents and grandparents marched to put an end to. Whether or not he can actually enact any of his bullshit policies, the real damage is in his discourse. He’s made racism and sexism acceptable in American politics again, just as we began to move past them (more women are serving in the Senate than at any time in America’s history, and they’re almost all part of the party that elected the first black president). Trump has dragged us back into the politics of dog whistles and “silent majorities.” Of George Wallace and Andrew Jackson. He’s brought the bubbas and white-sheet wearing “silent majority” back out of hospice, and they may not retreat for another 10 years. That, to me, is unforgivable. Hillary may be “crooked,” but to me, Trump is pure evil.

Think before you vote. 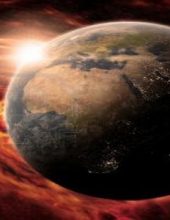 Is This The Beginning of The End? (Alarming Events Are Happening All Around Us)