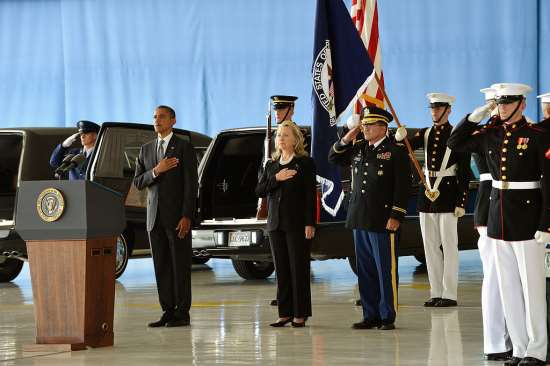 A citizen’s committee made up of former high military brass, CIA and intelligence agents and think tank members have finished their report on Benghazi.  Their conclusion is Obama’s policies made the Benghazi attack by Al Qaeda possible by switching sides in the war on terror.  The committee spent 7 months investigating the Benghazi attack and it’s causes.  Their conclusion was that Obama allowed weapons to enter Libya and into Al Qaeda’s hands.  Without those weapons, the attack in Benghazi would not be possible.

One former CIA agent, Clare Lopez was quoted as saying:

“The United States switched sides in the war on terror with what we did in Libya, knowingly facilitating the provision of weapons to known al-Qaeda militias and figures.”

She blamed the Obama administration for allowing $500 million dollars worth of weapons to enter the country and into Al Qaeda’s hands:

“The intelligence community was part of that, the Department of State was part of that, and certainly that means that the top leadership of the United States, our national security leadership, and potentially Congress – if they were briefed on this – also knew about this.”

The weapons were supposed to be for Gaddafi, but were allowed to flow to the Islamists fighting him.

Here is an  excerpt from their report:

“The White House and senior Congressional members,’ the group wrote in an interim report released Tuesday, ‘deliberately and knowingly pursued a policy that provided material support to terrorist organizations in order to topple a ruler [Muammar Gaddafi] who had been working closely with the West actively to suppress al-Qaeda.”

Another commission member, Retired Rear Admiral Chuck Kubic, said those weapons are now in Syria as Al Qaeda is trying to expand it’s sphere of influence throughout the Middle East.

“Gaddafi wasn’t a good guy, but he was being marginalized.  “Gaddafi actually offered to abdicate’ shortly after the beginning of a 2011 rebellion.”

“But the U.S. ignored his calls for a truce.”

Kubic said that the effort at truce talks fell apart when the White House declined to let the Pentagon pursue it seriously.

“We had a leader who had won the Nobel Peace Prize, but who was unwilling to give peace a chance for 72 hours.”

Gaddafi only asked for two conditions in return for stepping down.  First, he wanted to be able to continue fighting against Al Qaeda and having the sanctions lifted against himself, his family and his supporters.  Very modest requests but ones that were rejected outright by Obama and his henchpersons.

The White House and the National Security staff have not commented on the report.

Admiral James Lyons believes that the Benghazi attack was a kidnap plan gone wrong and that the Islamic extremists planned to trade Christopher Stevens for Sheikh Omar Abdel-Rahman.  Abdel-Rahman was the mastermind of the first World Trade Center bombing.  Lyons also accused the Obama administration of lying when they said they did not have any assets ready to relieve Benghazi:

“The flight time from Sigonella to Benghazi is roughly an hour.”

The committee requested 87 documents from the government, but relied on their contacts within the intelligence community for much of their information.
Former CIA officer Wayne Simmons was harshly critical of Hillary and her actions before, during and after the Benghazi attack:

“I know who made the decision, in my heart of hearts, to leave our war fighters there and be blown up. And then to have one of the most powerful politicians in our country sit there and say, “What difference does it make?” – should be an alarm bell for all Americans.

Lopez suggested that the fact that John Boehner blocked appointing a select committee may mean high ranking congressional leaders had been briefed on the WH plans.