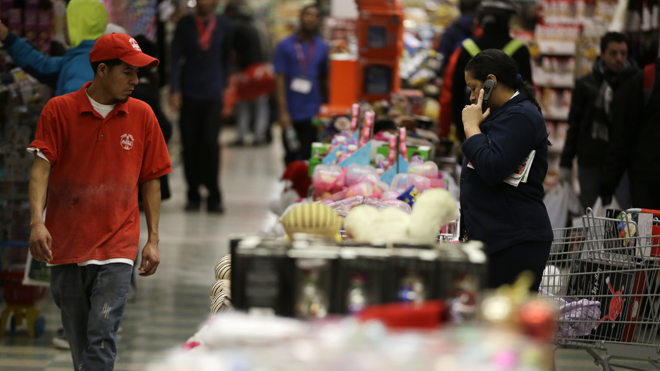 The holiday shopping season kicked off much earlier this year, as at least a dozen national retail chains from Macy's to Gap to Target opened their stores on Thanksgiving Day despite planned protests from workers' rights groups opposed to employees working on the holiday.

The early start to this year's shopping mayhem did not prevent several reported violent confrontations at stores around the nation that opened up for Black Friday, which is typically considered the biggest shopping day of the year.

In the Chicago suburb of Romeoville, a driver believed to be involved in a shoplifting scheme was shot by authorities after dragging a police officer who was trying to stop him in the parking lot of a Kohl's department store late Thursday, the Chicago Tribune

The suspected shoplifter and two additional suspects were arrested, police told the newspaper. Both the driver and the officer sustained injuries that were not thought to be life-threatening, according to the report.

At a Wal-Mart in the Southern California city of Rialto, a police officer was injured while trying to break up a fight after a store manager decided to open the doors early, which police said led to the melee, according to the San Bernardino County Sun.

Police said there were three fights at the store, two of which were inside over merchandise and the third outside that left the officer injured. All of the people involved in the fights were taken into custody, the newspaper reported.

In Las Vegas, a customer who had purchased a big-screen television at Target was shot in the leg while walking to a nearby apartment complex, KLAS-TV

reported. The victim was taken to an area hospital with non-life threatening injuries, according to police.

In the past few years, retailers have pushed opening times into Thanksgiving night. They've also pushed up discounting that used to be reserved for Black Friday into early November, which has led retail experts to question whether the Thanksgiving openings will steal some of Black Friday's thunder.

Overall, The National Retail Federation expects retail sales to be up 3.9 percent to $602.1 billion during the last two months of the year. That's higher than last year's 3.5 percent growth, but below the 6 percent pace seen before the recession.

Analysts expect sales to be generated at the expense of profits as retailers will likely have to do more discounting to get people into stores.

About 15,000 shoppers were at Macy's Herald Square in New York City right before the doors opened, estimated Terry Lundgren, CEO, president and chairman of the department store chain. Last year, the store had 11,000 people right before the midnight opening.

Lundgren, who was at the entrance, told The Associated Press that the retailer knew it had to open when it found out other competitors were planning to open on Thanksgiving night. He also said it received positive feedback from its employees. "We're a competitive group," he said. "It's very clear they (the shoppers) want to be here at 8 p.m."

Shelby Wheatley, 17, was with her mother, her mother's friend and her best friend, who all traveled from Orlando, Fla. Wheatley was looking for a prom dress and wanted to buy it in New York.

"I did Black Friday-but never Thursday–and never in New York," she said.

As for Thanksgiving, the group celebrated early with family last week.

The Thanksgiving openings are part of retailers' holiday strategy of trying to lure shoppers in early and often during the holiday shopping season. But the stores face challenges in doing that.

Some workers have petitions on change.org to protest against Target and Best Buy. The Retail Action Project, a labor-backed group of retail workers, also is planning to have members visiting customers at stores including Gap and Victoria's Secret in Manhattan to educate them about the demands on workers.

Wal-Mart has been the biggest target for protests against holiday hours. Most of the company's stores are open 24 hours, but the retailer is starting its sales events at 6 p.m. on Thursday, two hours earlier than last year.

The issue is part of a broader campaign against the company's treatment of workers that's being waged by a union-backed group called OUR Walmart, which includes former and current workers. The group is staging demonstrations and walkouts at hundreds of stores around the country on Black Friday.

Brooke Buchanan, a Wal-Mart spokeswoman, said the discounter has received "really good feedback" from employees about working the holiday.