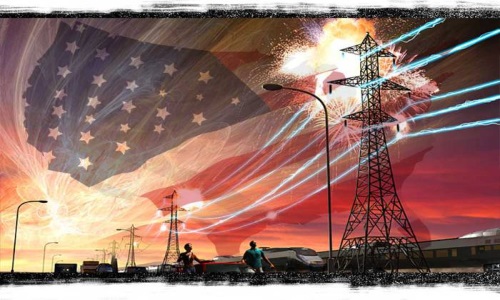 Pyongyang isn't going to knock out the electrical grid and cause riots at the supermarket.

Via : By Kyle Mizokami

Earlier this week, the former director of the CIA penned an apocalyptic article in The Hill describing the end of American civilization. The article warns of the threat of a North Korean electromagnetic pulse attack, claiming such an attack would kill "9 out of 10 Americans."

Okay. While North Korea does pose an increasingly serious nuclear threat to the United States, the claim it could kill 300 million Americans by depriving them of electricity is not realistic.

Scientists have known about the threat of electromagnetic pulse (EMP) for decades. EMP is a burst of electromagnetic radiation sent flying through the atmosphere by a nuclear or thermonuclear explosion. This radiation gradually fizzles out, but electrical objects near the detonation can suffer effects ranging from simply being turned off to having their circuitry shorted out.

THE TEST SENT AN ELECTROMAGNETIC ELECTRICAL SURGE AS FAR HAWAII, MORE THAN EIGHT HUNDRED MILES AWAY.

EMP first caused a stir in 1962 with the STARFISH PRIME weapons test. STARFISH PRIME was conducted to determine the effects of nuclear weapons at high altitude. A Thor missile lofted a 1.4 megaton nuclear warhead 250 miles above the Pacific Ocean, where it detonated off Johnson Island. The test sent an electromagnetic electrical surge as far Hawaii, more than eight hundred miles away. The surge knocked out streetlights, damaged some local telephone company equipment, and reportedly caused burglar alarms to go off and garage doors to open by themselves.

In 2008, a Congressional commission looked into EMP claims. The report stated:

"A single EMP attack may seriously degrade or shut down a large part of the electric power grid in the geographic area of EMP exposure effectively instantaneously. … Should significant parts of the electrical power infrastructure be lost for any substantial period of time, the Commission believes that the consequences are likely to be catastrophic, and many people may ultimately die for lack of the basic elements necessary to sustain life in dense urban and suburban communities."

Jeffrey Lewis, an arms control scholar, wrote in Foreign Policy in 2013, "(the) EMP Commission exposed 37 cars and 18 trucks to EMP effects in a laboratory environment. While EMP advocates claim the results of an EMP attack would be "planes falling from the sky, cars stalling on the roadways, electrical networks failing, food rotting," the actual results were much more modest. Of the 55 vehicles exposed to EMP, six at the highest levels of exposure needed to be restarted. A few more showed "nuisance" damage to electronics, such as blinking dashboard displays."

Back to The Hill article, which claims an EMP attack by North Korea would kill "9 of 10 Americans by starvation and societal collapse." The first clue that something is amiss with this claim is that, if you trace the link provided in the article, it cites the words of Congressman Roscoe Bartlett, who describes a novel he had read called One Second After. Bartlett says:

"I read a prepublication copy of a book called One Second After. I hope it does get published; I think the American people need to read it. It was the story of a ballistic missile EMP attack on our country. The weapon was launched from a ship off our shore, and then the ship was sunk so that there were no fingerprints. The weapon was launched about 300 miles high over Nebraska, and it shut down our infrastructure countrywide. The story runs for a year. It is set in the hills of North Carolina. At the end of the year, 90 percent of our population is dead; there are 25,000 people only still alive in New York City. The communities in the hills of North Carolina are more lucky: only 80 percent of their population is dead at the end of a year."

Bartlett was so spooked by this novel that after he left Congress he moved into the woods and became a survivalist, where he spends his days "cutting logs, tending gardens and painting walls." And just to be clear, the claim that North Korea could kill 90 percent of the American people was directly pulled from a science fiction novel.

There are even more problems with this claim. Nobody knows how large of a nuclear weapon it would take to destroy the U.S. electrical grid. Five megatons? Five hundred megatons? A gigaton? North Korea would only have one shot at this, because any such attack would result in a U.S. retaliatory nuclear strike that would leave everything from the DMZ to the Chinese border one smoking, radioactive crater. America's. nuclear arsenal and command and control is hardened against EMP and would survive to dish out a ruthless counterstrike. That in and of itself would deter the North Korean leadership from committing what would amount to societal suicide just to watch Americans eat grass before they ultimately starve.

THE CLAIM THAT NORTH KOREA COULD KILL 90 PERCENT OF THE AMERICAN PEOPLE WAS DIRECTLY PULLED FROM A SCIENCE FICTION NOVEL.

Furthermore, North Korea does not have thermonuclear weapons. It claims to have tested a thermonuclear device last year but the device was not large enough to actually have been so. North Korea wants nuclear weapons and indeed may some day have them, but that is generally seen as being somewhere down the road. Even then, it would have to develop a rocket capable of delivering an extremely large warhead.

Warning against the threat of North Korean nuclear weapons is a public service. Warning that North Korea could kill 90 percent of the American people with EMP is not. It's even a good idea to warn, broadly, against the threat of EMP: in 1859, a solar storm sent a pulse of energy hurting toward Earth, sending electrical surges through those electrical systems in use at the time, telegraph networks. Telegraph operators received shocks from their equipment and telegraph pylons threw sparks. If it occurred today, the so-called "Carrington Event" could indeed have serious consequences for satellites, electrical grids, and electronic devices worldwide. Tying such a real problem to a fantasy involving North Korea does a disservice to the larger issue.

Via : BY BEN KAMISAR

North Korean official warns of preemptive strike of its own.

A top North Korean official is threatening a preemptive strike against the U.S. if his nation believes America is taking "reckless" military action.

Vice Minister Han Song Ryol on Friday told The Associated Press that President Trump's tweets are part of a "vicious cycle" of escalated tensions in the region, adding that North Korea will continue to stockpile more nuclear warheads and improve on the country's nuclear program.

As the U.S. continues to publicly weigh options to contain the country and its nuclear ambition, Han said North Korea would not simply stand by if it believed Trump would follow through on his threats.

"We've got a powerful nuclear deterrent already in our hands, and we certainly will not keep our arms crossed in the face of a U.S. pre-emptive strike," Han said. "Whatever comes from the U.S., we will cope with it. We are fully prepared to handle it."

NBC News on Thursday reported said that the U.S. is prepared to preemptively strike North Korea if it decides to test a nuclear weapon, a report that was disputed by other reports and government sources.

The report added that two American destroyers are in the area, with one armed and ready about 300 miles from North Korea's nuclear test site. This week, the USS Carl Vinson aircraft carrier strike group began to move toward the area.

While the international community has sought to tamp down North Korea's development of nuclear weapons, the political leadership there has long been developing the capability and has tested those weapons underground at least five times. Han specifically did not rule out another test in his interview with the AP.

The comments from the North Korean regime are part of escalated tensions between the dictatorship and the West that have taken hold since Trump took office. Ever since North Korea tested a missile while Trump was meeting with Japanese President Shinzo Abe, Trump has taken a tough line on the nation, including with strong words on Twitter. The American president has also leaned on China, both in public and private, to take a larger role in the situation in the East.

"Trump is always making provocations with his aggressive words," Han said. "It's not [North Korea] but the U.S. and Trump that makes trouble."

William Arkin for NBC News reports, The U.S. is prepared to launch a preemptive strike with conventional weapons against North Korea should officials become convinced that North Korea is about to follow through with a nuclear weapons test, multiple senior U.S. intelligence officials told NBC News.