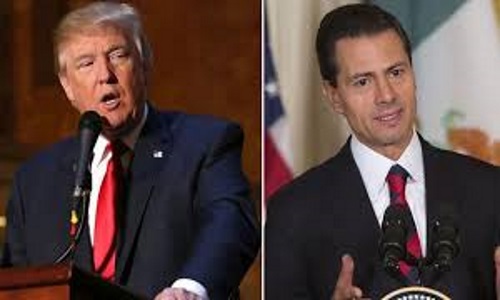 Mexican President Enrique Peña Nieto defiant to Trump and his wall. Mexico offers and demands respect, as the fully sovereign nation that we are. Reaffirm our friendship with the people of USA and will to get to agreements with their Government. Agreements on behalf of Mexicans. Regret and fail the decision of us. UU continue the construction of a wall that divides far from us, join us. Trump …"Our country has enough problems w/o allowing people to come in, who in many cases, are looking to do tremendous destruction."

Mexico slams an executive order by US President Donald Trump to start the construction of a border wall between the two neighbors. During a televised speech, Pena Nieto also pledged to protect Mexican immigrants residing in the US. Meanwhile, Mexico's opposition leader urged his government to lodge a lawsuit against Trump’s government at the United Nations over the wall he plans to build. Andres Manuel Lopez Obrador described the move as a violation of human rights and a case of racial discrimination. The measure has raised calls for cancelling Pena Nieto’s next week meeting with Trump in Washington. However, the Mexican Foreign Ministry confirmed that the visit will take place. Trump signed the wall decree on Wednesday despite outcry from human rights groups.

VIA : Al Jazeera and news agencies

Mexico's leader Enrique Pena Nieto has condemned US President Donald Trump's move to build a border wall , and insisted that his country has no intention of paying for it.

"I regret and condemn the decision of the United States to continue construction of a wall that, for years, has divided us instead of uniting us," President Pena Nieto said in a brief televised message on Wednesday.

"Mexico does not believe in walls. I have said it time and again: Mexico will not pay for any wall," he said, referring to Trump's vow to make his southern neighbour pay for the barrier.

Trump's plan has also been roundly  condemned by other Latin American leaders .

"Mexico gives and demands respect as the completely sovereign nation that we are," Pena Nieto, who is due to meet Trump at the White House next week, said.

Without mentioning the trip, Pena Nieto said he would wait for a report from a high-level Mexican delegation holding meetings in the US capital this week and consult governors and MPs before deciding on "the next steps to take."

Pena Nieto said he had ordered Mexico's 50 consulates in the US to act as legal counsel for the rights of Mexican migrants.

"Our communities are not alone. The government of Mexico will offer legal counsel that will guarantee the protection they need," he said.

Al Jazeera's John Holman, reporting from the Mexican side of the US border, said Pena Nieto was trying to be cautious in responding to Trump's latest policy proposal.

Earlier on Wednesday, Trump signed directives to order the building of the wall, and crack down on US cities that shield undocumented immigrants.

"A nation without borders is not a nation. Starting today, the US gets back control of its borders," he said.

READ MORE : The Gory Dawn of the New World Order : 2017 Will Be The Year When EVERYTHING Will Change! 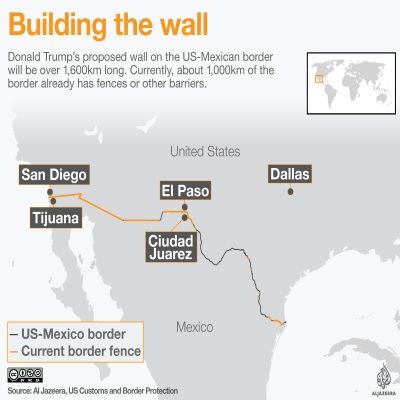 The order, signed on Wednesday, will enable construction of "a large physical barrier on the southern border", White House spokesman Sean Spicer said.

"Building this barrier is more than just a campaign promise, it's a common-sense first step to really securing our porous border," Spicer added.

In an interview with ABC News on Wednesday, Trump said construction of the wall would start within months, with planning starting immediately, and that Mexico would pay back to the US "100 percent" of the costs.

During the campaign, Trump referred to Mexican migrants as "rapists and drug dealers". He also visited Mexico, and later declared that Mexico will be paying for the construction of the wall. "We'll be reimbursed at a later date from whatever transaction we make from Mexico," Trump said, repeating a campaign promise.

Reuters news agency reported that Trump was expected to take steps in the coming days to limit legal immigration, including executive orders restricting refugees and blocking the issuing of visas to people from several Muslim-majority Middle Eastern and North African countries including Syria, Sudan, Somalia, Iraq, Iran, Libya and Yemen.

A second executive order, signed during an appearance at the Department of Homeland Security, was aimed at stripping federal grant money from "sanctuary" states and cities, often governed by Democrats, that harbour undocumented immigrants.

Trump, though, said "illegal immigrants brought to US as children shouldn't be very worried".