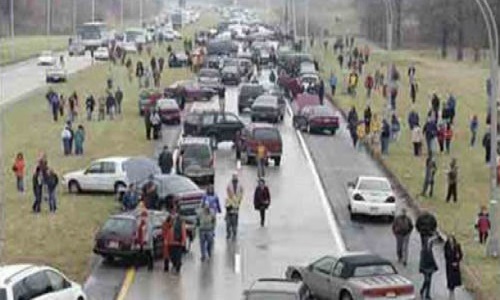 An EMP attack. Just how vulnerable is the United States? And what can we do to prevent the possibility of instantly plunging the engines of the 21st century into Stone Age chaos.

Congress recently brought an exploratory panel together to glance at the immediate aftermath resulting from an EMP attack.

The continuity of government plan appears to be the main objective. How well would you be prepared if the lights went out and didn’t come back on?

Cyber attacks against America’s critical infrastructure, including the power grid, are intensifying at an alarming rate. According to the Department of Homeland Security’s Industrial Control Systems Cyber Emergency Response Team (ICS-CERT), from October 2017 to May 2018 there were 200 brute-force cyber attack incidents, surpassing the 198 total attacks in all of fiscal year 2012 targeted the energy sector with an additional 3% solely targeting the nation’s nuclear sector. The attackers deployed methods as varied as spear-phishing attacks, SQL injections, and watering hole attacks. Continuing cyber intrusions directed against critical infrastructure make evident the imperative for greater cybersecurity. This upsurge of cyber threats aimed at critical infrastructure is one of the most pressing national security challenges facing the nation.

The Blackout was a national tragedy that we’ve all been coping with since past years.  Although there are many things from that event that we would all like to put behind us, I feel that we should never forget what happened lest we are doomed to experience its horrors again. So many of us suffered and many others lost their lives while the disaster persisted.

“We should be prepared to deal with cyber attacks that may result in difficult to restore power outages.” – Michael Assante

What would you do if the power went out across the country and didn’t come back on? For the first day, you might actually enjoy the downtime. Many of us would be unable to do business without lights, computers, and other electrical equipment. The silence might just be a welcomed mini-vacation.

But if the blackout stretched past an afternoon, things would start to get inconvenient. We would start to worry about the food in the refrigerator, if we’d be able to fill up gas tanks, and not being able to withdraw cash or use ATMs. After a few days of a country-wide blackout, for some, things would get dire. Would you and your family be able to comfortably survive?

American Blackout imagines a scenario just like this where a cyber-attack has darkened the entire United States. This not-so-far-fetched possibility is told in a fictionalized “real-time” over the course of 10 days by those who kept filming on cameras and phones. You may be surprised by how quickly our society could unravel when it becomes powerless. Some would fare better than others, but it would completely depend on their level of preparation and how they handled the crisis. Would you be prepared?

The American Red Cross, which knows a great deal about handling a multitude of disasters, has some important suggestions. If the power looks like it is not going to pop back on soon, the first thing you’ll want to consider is protecting your food supplies. Here are some things The Red Cross suggests you do:

You will also want to give some thought to electrical surges and protecting your equipment during the outage. Turn off and unplug all unnecessary electrical equipment, including sensitive electronics. Turn off or disconnect any appliances (like stoves), equipment or electronics you were using when the power went out.  The best way to gauge when the power has returned is to leave one light plugged in and turned on.

If the power stays out for a long period of time The Red Cross suggests staying close to home. Eliminate all of your unnecessary travel, especially by car. Traffic lights will be out and roads will be congested. If you are fortunate enough to have a generator and the fuel to run it, make sure you are savvy to generator safety.  Generators produce carbon monoxide and if used in an enclosed area, animals and people in the room could die of carbon monoxide poisoning.

If you are someone who is lucky enough to live in a place where the power never goes out for an extended period of time, you also may not realize that it is a bad idea to use outdoor grills and stoves inside. Devices that use gasoline, propane, natural gas or burning charcoal-burning for heat and cooking, also produce carbon monoxide. The Red Cross also suggests that you locate any such unit away from doors, windows and vents that could allow carbon monoxide to come indoors.

If you are using these tips, the first few days of the power outage should be smooth sailing. However, what will you do a week later the entire country is still off the power grid? Things could start to get difficult and dangerous for everyone. Check out The Red Cross website for more ideas on disaster preparedness. Find out how more than 78,000 Americans have greatly benefited from this amazing creation, and found energy independence, Click Here!

Watch American Blackout and decide for yourself if you would survive in the dark.

READ MORE : WHEN THE GRID GOES DOWN WHAT ARE YOU GOING TO DO?