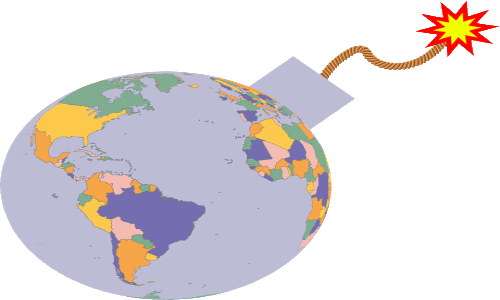 Economic Collapse Is Erupting All Over The Planet

Mainstream news outlets are already starting to use the phrase “economic collapse” to describe what is going on in some areas of our world right now.  For many Americans this may seem a bit strange, but the truth is that the worldwide economic slowdown that began during the second half of last year is starting to get a lot worse.  In this article, we are going to examine evidence of this from South America, Europe, Asia and North America.  Once we are done, it should be obvious that there is absolutely no reason to be optimistic about the direction of the global economy right now.  The warnings of so many prominent experts are now becoming a reality, and what we have witnessed so far are just the early chapters of a crushing economic crisis that will affect every man, woman and child in the entire world.

Let’s start with Brazil.  It has the 7th largest economy on the entire planet, and it is already enduring its worst recession in 25 years.  In fact, at the end of last year Goldman Sachs said that what was going on down there was actually a “depression“.

But now the crisis in Brazil has escalated significantly.

I want to share with you an excerpt from a recent article entitled “Brazil: Economic collapse worse than feared“.  I know, that title sounds like it comes directly from The Economic Collapse Blog, but I didn’t write it.

It actually comes from CNN…

Amid political chaos, Brazil’s economic collapse is worse than its government once believed.

In the midst of rising calls to impeach President Dilma Rousseff, Brazil’s central bank announced Thursday that it now expects the country’s economy to shrink 3.5% this year.

That’s worse than the central bank’s previous estimate for a 1.9% contraction. The darker forecast matches what the International Monetary Fund projected for Brazil — Latin America’s largest country — and what many independent economists have suspected.

It is one thing for Michael Snyder to tell you that Brazil is in the midst of “economic collapse”, but it is another thing entirely for CNN to say it.

And of course I have been warning about the crisis down in Brazil for quite some time now.  For much more on this, please see my previous article entitled “The Economic Collapse Of South America Is Well Underway“.

Meanwhile, things are actually much worse in Venezuela than they are in Brazil.  Food and basic supplies are in short supply, the inflation rate has hit 720 percent, and crime is completely out of control.

The only question now is whether Venezuela’s government or economy will completely collapse first.

The key word there is “completely.” Both are well into their death throes. Indeed, Venezuela’s ruling party just lost congressional elections that gave the opposition a veto-proof majority, and it’s hard to see that getting any better for them any time soon — or ever.

Incumbents, after all, don’t tend to do too well when, according to the International Monetary Fund, their economy shrinks 10 percent one year, an additional 6 percent the next, and inflation explodes to 720 percent. It’s no wonder, then, that markets expect Venezuela to default on its debt in the very near future. The country is basically bankrupt.

Once again we see a very respected mainstream publication using the phrase “economic collapse” to describe what is happening in South America.

I would encourage you to watch that video, because what is happening down there will eventually be happening here.

Meanwhile, over in Europe the collapse of the Italian banking system has entered a disturbing new chapter.  Italy’s finance minister has called a meeting in Rome for Monday that will be focusing on a “last resort” bailout plan for the troubled banks…

Finance minister Pier Carlo Padoan has called a meeting in Rome on Monday with executives from Italy’s largest financial institutions to agree final details of a “last resort” bailout plan.

Yet on the eve of that gathering, concerns remain as to whether the plan will be sufficient to ringfence the weakest of Italy’s large banks, Monte dei Paschi di Siena, from contagion, according to people involved in the talks.

Italian bank shares have lost almost half their value so far this year amid investor worries over a €360bn pile of non-performing loans — equivalent to about a fifth of GDP. Lenders’ profitability has been hit by a crippling three-year recession.

As Italy descends into financial chaos, the rest of the continent better be paying attention.

Do you remember how hard it was for the rest of Europe to rescue Greece?

Well, Greece has the 44th largest economy on the planet.

Italy has the 8th.

It would be hard to overstate the seriousness of what is going on over in Europe, and it is not just Italy we are talking about.  All over the continent major banks are in deep trouble, and the chairman of France’s second largest  retail bank recently told reporters that “I am much more worried than I was in 2009“.

And there is very good reason for concern.  On Sunday, we learned that a major “bail-in” had just been announced for one of Austria’s most prominent banks.  The following comes from Zero Hedge…

And then today, following a decision by the Austrian Banking Regulator, the Finanzmarktaufsicht or Financial Market Authority, Austria officially became the first European country to use a new law under the framework imposed by Bank the European Recovery and Resolution Directive to share losses of a failed bank with senior creditors as it slashed the value of debt owed by Heta Asset Resolution AG.

The highlights from the announcement:

Today, the Austrian Financial Market Authority (FMA) in its function as the resolution authority pursuant to the Bank Recovery and Resolution Act (BaSAG – Bundesgesetz über die Sanierung und Abwicklung von Banken) has issued the key features for the further steps for the resolution of HETA ASSET RESOLUTION AG. The most significant measures are:

According to the current resolution plan for HETA, the wind-down process should be concluded by 2020, although the repayment of all claims as well as the legally binding conclusion of all currently outstanding legal disputes will realistically only be concluded by the end of 2023. Only at that point will it be possible to finally distribute the assets and to liquidate the company.

The dominoes are starting to fall in Europe, and I would expect even bigger announcements in the weeks and months to come.

Over in Asia, economic chaos is beginning to prevail as well.

In China, the stock market is already down more than 40 percent from the peak, Chinese exports were down 25.4 percent on a year over year basis in February, and Chinese economic numbers overall have not been this poor since the depths of the last global recession.

At the same time, the Japanese economy is really struggling right now.  As I wrote about the other day, Japanese GDP has shrunk for two out of the last three quarters, we just saw Japanese industrial production experience the biggest one month decline that we have witnessed since the tsunami of 2011, and business sentiment has fallen to a three year low.  The Nikkei has dropped by about 5,000 points from where it was last summer, and some analysts believe that Japanese markets “are being destroyed” due to massive intervention by the Bank of Japan.

Here in the United States, we haven’t been hit quite as hard as the rest of the world just yet, but there are lots of very disturbing warning signs all around us.

At the end of last week, we learned that it is being projected that U.S. GDP will have grown by just 0.1 or 0.2 percent during the first quarter of 2016.  And on Monday corporate earnings reporting season begins, and it is expected to be a very, very bad one.  The following comes from Business Insider…

We are about to get confirmation that earnings growth for America’s biggest companies was negative in the first quarter, compared to the same period a year ago.

When aluminum giant Alcoa releases its results on Monday, it will mark the unofficial start of the heaviest reporting season for S&P 500 companies.

The final scoreboard is expected to show a 9.1% earnings drop for the quarter, according to FactSet senior earnings analyst John Butters.

If these projections turn out to be accurate, it will be the fourth quarter in a row of earnings declines.  This is something that we never see outside of a recession.

And for a whole bunch more numbers which indicate that the U.S. economy is in very serious trouble, please see my previous article entitled “19 Facts That Prove Things In America Are Worse Than They Were Six Months Ago“.

Of course I am just another voice in the crowd when it comes to predicting that the U.S. economy is headed for rough times.  For example, just check out what Societe Generale economist Albert Edwards is saying…

A tidal wave is coming to the US economy, according to Albert Edwards, and when it crashes it’s going to throw the economy into recession.

…the profit recession facing American corporations is going to lead to a collapse in corporate credit.

Whole economy profits never normally fall this deeply without a recession unfolding. And with the US corporate sector up to its eyes in debt, the one asset class to be avoided — even more so than the ridiculously overvalued equity market — is US corporate debt. The economy will surely be swept away by a tidal wave of corporate default.

As you can see, it isn’t just one nation or one region of the world that we need to be concerned about.

Economic chaos is erupting literally all over the planet, and global leaders are starting to panic.

Unfortunately, they have had seven years to try to fix things since the last global recession, and they didn’t get the job done.  Anyone that believes that by some miracle they will be able to pull us out of the fire this time and that everything will somehow be okay is simply engaged in wishful thinking.