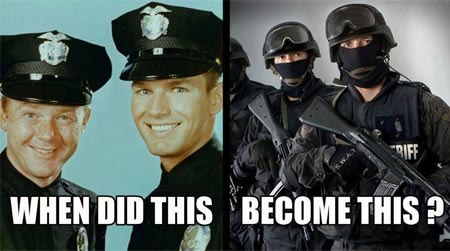 Cops Show Up and Beat Him, Elderly Man Calls Ambulance

It seems more and more these days that if you think a loved one is in danger in America, calling the cops should be your absolute last possible resort.

Missourian Elbert Breshears recently called for an ambulance because his elderly wife, who suffers dementia, had endured an episode and knocked a window out of their home.

According to ABC affiliate KSPR33 and unfortunately for Breshears, the cops showed up before the ambulance did:

“The wife and I were standing about here, that’s the window she knocked out. I was standing here holding her hand and she was wavering hollering help,” Breshears said.

When police got there,”police car drove up, he bailed out ran over and knocked me down. He told me to get up, I told him I couldn’t,” he explained.

That’s when Breshears says police got aggressive. “First thing, I know they grab me, threw me out there on the gravel. One of them sat down on my back, the other sat down on my head. They were trying to get handcuffs on me. I told them I can’t get my hands up. I have no objection to being handcuffed,” says Breshears.

By then paramedics arrived. Breshears says he and his wife were taken to the hospital. A doctor looked him over. “He dug out the gravel out of my head and sewed my head up,” he says.

It’s as if they are under the impression that their job on every call is just to show up at an address and either beat up or tase or shoot someone without actually ascertaining what’s even going on first.

Last month I reported on the parents of an Arapaho teen who called the cops because they were afraid their son might harm himself. The police showed up and harmed him instead, shooting him seven times and killing him. That kid wasn’t alone either; a similar story happened earlier this year to the parents of a North Carolina teen. That kid was barely 90 pounds and probably couldn’t have even hurt himself that badly to begin with, let alone hurt the well-armed police officers who showed up and ended his life.

Last year I reported on how an unarmed car wreck survivor was gunned down in the street as he was running to the cops for help.

We live in a country where the police are highly militarized and approximately 500 innocent Americans are killed by them every single year; based on the frequency of these reports, that number is set to rise.

“I don’t hit my wife. I’ve lived with the woman for 47 years. I love the woman. I can’t help what she does,” says Breshears.

And you know who ultimately pays the price when all these police brutality lawsuits get filed? The taxpayers who pay these officers’ salaries, that’s who. The officers themselves hardly ever get anywhere close to anything most of us would consider actual punishment.

Deputy Micah McNinch pulled over a man in the middle of the night as he was rushing his sick mother to the hospital. The woman was in the back seat, having trouble breathing.

McNinch pulled over the man for having expired tags. They were a mile from the hospital.

Instead of escorting the man and his mother to the hospital so the woman could receive medical attention right away and sorting out the ticket later, the officer kept them there and continued to write it.

The woman died. Over a ticket for expired tags.

McNinch was punished in only the way cops whose actions lead to an innocent person’s death get punished: one whole day without pay.

It’s as if America has fallen prey to unmitigated thuggery.