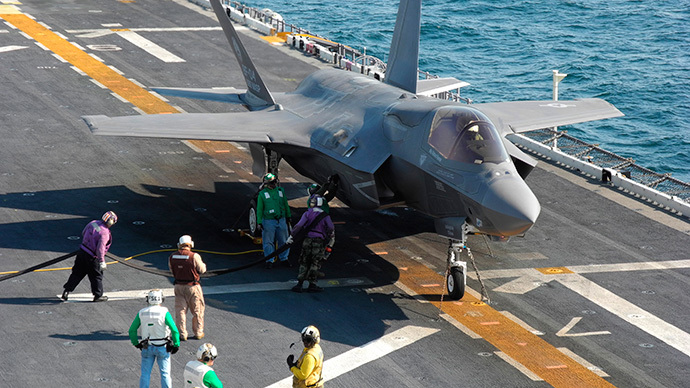 As the cost of Lockheed Martin’s F-35 fighter jet continues to grow, so do the headaches: the United States military announced on Thursday that its entire fleet of aircraft has been grounded until engine inspections are completed.

The decision comes as the Pentagon struggles to find the source of yet another problem with the $398.6 billion program. On June 23, an F-35 caught fire as the pilot attempted to take off at a Florida air base. According to Reuters, one unidentified source described the incident by saying, "The engine ripped through the top of the plane.”

In the most recent Reuters report, the military said it still had not highlighted the cause of that fire, and that new inspections are being put in place in order to assess the capability of the entire fleet.

"Additional inspections of F-35 engines have been ordered, and return to flight will be determined based on inspection results and analysis of engineering data," the Defense Department said in a statement to the news service on Thursday.

According to the Burlington Free Press, the incident is also under review by the Air Force Safety Investigation Board. That overview could take up to a month to finish.

"The flights have paused while we figure out what went wrong," 1st Lt. Hope Cronin, a spokeswoman at Eglin for the Air Force's 33rd Fighter Wing, told the Free Press.

As noted by Gizmodo, this marks the eighth time the entire F-35 fleet has been grounded. The last time also occurred in mid-June, when an engine oil leak forced the military to inspect 104 of its jets. Three of the F-35s failed the test. It’s currently unclear when exactly the F-35 fleet could be back in the skies, but plans to fly a jet for a July 4 naming ceremony of Britain’s latest aircraft carrier have already been cancelled.

There are also tentative plans to fly the jets during two air shows in the United Kingdom on July 11 and 14, though no final decision has been rendered.

"We will contribute to the return to flight determination, and will aim to do what is prudent for the enterprise at large without compromising the ongoing mishap investigation," Air Force Lieutenant General Chris Bogdan said to Reuters.