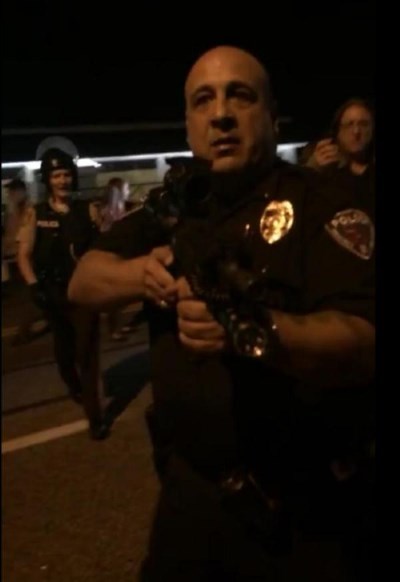 Shocking footage out of Ferguson, Missouri shows a police officer pointing his gun directly at protesters and press while remarking, “I’m going to f***ing kill you!”

The scene was witnessed by Infowars reporter Joe Biggs who was also filming the incident. The clip shows a Ferguson officer with his gun raised pointing it directly at a citizen journalist who was live streaming at the time.

“My hands are up bro, my hands are up,” states the journalist before the cop responds, “I’m going to f***ing kill you, get back, get back!”

“You’re going to kill him?” asks another individual before the journalist asks, “did he just threaten to kill me?”

When the cop is asked for his name he responds, “go fuck yourself.”

Another clip shows the officer pointing his gun as protesters demand he lower the weapon. A second cop intervenes to make the officer lower his weapon as more irate demonstrators demand to know the officer’s name.

The officer’s response to people asking for his name almost immediately prompted the launch of the Twitter hashtag #officergofuckyourself.

Biggs live tweeted the incident, while Infowars reporter Mikael Thalen also had guns pointed at him during a separate incident.

Biggs took this photograph of the cop at close range.

The incident is certain to stoke huge controversy given that authorities in Ferguson have repeatedly broken promises to de-escalate tensions amidst continued unrest. 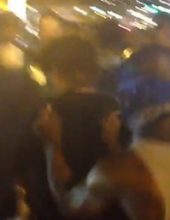