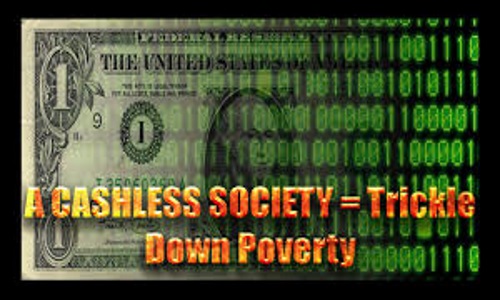 Will there be a financial collapse in the United States before the end of 2017?  An increasing number of respected financial experts are now warning that we are right on the verge of another great economic crisis.

Financial experts Gerald Celente and Ron Pault are both warning that the next major economic crash is in our very near future.

U.S. stocks have declined four days in a row, the Dow is down more than 750 points from the peak of the market in May, and one out of every five U.S. stocks is already in a bear market.  I fully expect the next several months to be extremely chaotic, and I am far from alone.  The following are 2 financial experts that are warning that a great financial crisis is imminent…

We are moving into a technocracy. "There is no more need for elevator operators and there will shortly be no need for taxi drivers or automobile assemblers. All of today’s “jobs” will eventually disappear and only those who perceive that change and fashion their lives to accommodate it will “have a job.” The “law of the jungle” will never change, any more than the rule that “capital follows cheap labor” will change. Perhaps the today’s auto assemblers will be robot assemblers of the future. If no one needs oil any longer, perhaps we can find a new use for Mideast sand. After all, most U.S. glass makers have disappeared, because plastic is cheaper."
Why do our leaders hate us so much and care so little about our well-being?

"Power tends to corrupt and absolute power corrupts absolutely." So said Lord Acton, and most anarchists would agree. Any hierarchical system provides positions of power which are sought by the worst sort of people, namely the ambitious, unscrupulous and ruthless. Furthermore, even if by some chance sensitive and honest individuals obtain positions of power, they can quickly become corrupted. This is the experience with governments, corporations, churches, political parties and other institutions.

But why does power corrupt? For the answer, it is worth consulting the excellent work by David Kipnis, a professor of psychology at Temple University. He has carried out numerous experiments showing just how power corrupts.

For a person to be autonomous is widely considered to be a good thing. It is a feature of being fully human. When a person exercises power over others, the powerholder gains the impression that the others do not control their own behaviour or, in other words, they are not autonomous. Hence, they are seen as less worthy. In short, a person who successfully exercises power over others is more likely to believe that they are less deserving of respect. They thus become good prospects to be exploited.

For example, Kipnis organised experiments in which a "boss" oversees the work of "subordinates" in a simulated situation. The experiment is contrived so that all subordinates do the same work. But the subordinate who is thought to be self-motivated is rated much more highly — for exactly the same work — than the subordinate who is thought to have done the work only under instruction. As well as laboratory studies, Kipnis examines the effects of power on the powerholder through studies of couples, managers and protagonists in Shakespeare's dramas. The results are always the same.

Kipnis follows through the implications of such evidence in a number of areas involving technology, including medical technology, workplace technology and the technology of repression. For example, technologies for surveillance or torture serve to control others: that is the obvious effect. But in addition, the psychology of the powerholder is changed when the technology promotes the reality or impression that others lack autonomy. Those subject to the technology are treated as less worthy, and any prospects for equality are ruled out.

Kipnis rightly points out that few studies have looked at the effects of power on the powerholder. He has done an admirable job of redressing this imbalance.

As a result of his investigations, Kipnis is quite pessimistic about solving the problems of power and the technology that reinforces it, precisely because the usual prescriptions ignore the effects of power on the powerholder. It seems, though, that Kipnis is unaware of anarchism and the longstanding anarchist critique of all forms of hierarchy.

However, this gap need not detract from the value of Kipnis's studies for anarchists. Besides the points mentioned above, he deals with tactics of influenc other corruptions of power. This work bears close study by all who want to understand better the psychological dynamics of power."

Economic Collapse Imminent says Ron Paul. Paper money was designed to transfer wealth from the poor and middle class to the wealthy by using inflation.. they took your wealth, used it to create monopolies(duo-octo) in every sector of our lives(energy, entertainment, communications, manufacturing of everyday items), and now have no reason to pay out interest cause (((they))) have 80% of the world wealth within their group and a monopoly on banking so no one can compete.True loyal American patriots pay no taxes to a defense contractor-owned military junta which relies upon perpetual proxy wars with false enemies in order to sustain its armaments industries. Together with solidarity we can push the Fed OFF THE FISCAL CLIFF into insolvency and shut down the federal government, this is the only non-violent means to overthrow our oppressors. We Starve the Snakehead and its body shall die .

These “bad feelings” are also reflected in the hard economic data.  U.S. consumer spending has declined for three months in a row, and U.S. factory orders have fallen for eight months in a row.

The numbers are screaming that we are heading for another major recession.

But could it be possible that this is just another false alarm?

Could it be possible that the blind optimists are right and that everything will work out okay somehow?

There is so much that we could learn from all these three men.

Sadly, just like we saw in 2008, most Americans are ignoring the warnings.


We will just have to wait and see…