Florida closer to waiving gun laws during riots, other emergencies 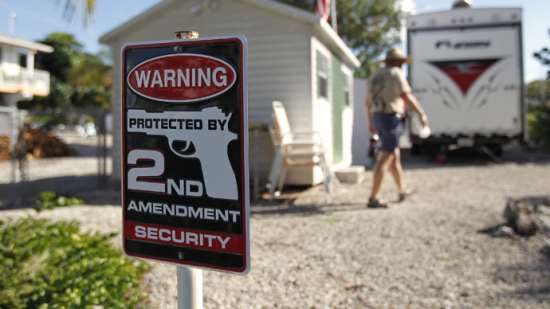 Hurricanes, toxic events, riots, and other emergencies in Florida could soon be enough to allow residents to circumvent the state’s gun laws and carry a weapon without a permit if a bill passed Friday is signed into law.

The bill would allow any Floridian without a criminal record to flaunt an assault weapon or pistol with a high-capacity magazine during a state of evacuation. Known as HB 209, the legislation passed in the state house by a 80-36 margin with support from the National Rifle Association. Six Democrats voted for the bill, ignoring Pinellas County Sheriff Bob Gualtieri’s objection that the bill was too vague.

“To allow people to go into a riot while concealing a gun without a permit is the definition of insanity,” he told the Miami Herald. “The bill is crazy, it’s absurd.”

Among Gualtieri’s issues with the bill is the lack of clarity regarding how long, or over what geographic area, a firearm owner may qualify to conceal a weapon in an evacuation. Also, the bill permits those who are “in lawful possession” of guns to carry weapons. What exactly that means is unclear, with columnists speculating if the law would allow the adult children of gun owners to carry guns.

Not all of the reaction has been negative. Representative Heather Fitzenhagen (R-Fort Myers) was the chief sponsor of the bill and declared that its passage in the house is evidence that independence is alive in well in the southern state.

Florida’s gun laws are among the loosest in the nation and the state has spent years in the headlines because of the ongoing legal drama around its “Stand Your Ground” law, which permits residents to use lethal force when they feel that their life is at risk.

Proponents maintain the legislation is only meant to give people the chance to protect themselves, their family, and their property during any statewide crisis that is declared an emergency by the governor or local authorities. One such incident many in Florida remember well is the racially motivated riots and civil disturbances that created havoc in south St. Petersburg in 1996. This bill could introduce weapons into similar events in the future.

“When the power lines are down, communication lines are down, your home has been damaged or destroyed, and you need to get out in a hurry, the last thing you need to worry about is being charged with a crime because you’re taking maybe one of your most valuable possessions with you,” Republican Representative Neil Combee told Reuters.

Lawmakers opposed to the bill also speculated that crowding the public into a hurricane shelter, for example, and allowing guns could turn already heightened tensions past a boiling point.

A companion bill, SB 296, is pending in the state senate and will be discussed at a hearing in the Appropriations Committee before going up for a floor vote.

The growing media attention and lingering uncertainty has convinced other to reevaluate the situation. Senator Charlie Dean (R-Inverness) told the Herald a statewide emergency may only be made more dangerous by introducing firearms.

“At what point do we have control over knowing when someone is no longer evacuating,” said Dean, a former sheriff. “In most of my experience, officers are there to help you in an emergency. I’m not really sure what advantage you have by sticking a gun in your belt.”