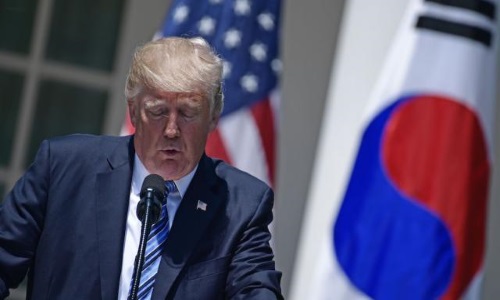 While one of Trump's recurring campaign promises was that he would "punish" China and other key US trade counter-parties if elected, for taking advantage of free-trade by imposing steep tariffs and duties on foreign imports to "level the playing field," the President's stance changed drastically after the election, U-turning following his amicable meeting with China's president Xi Jinping in March, but mostly as a result of pressure by his ex-Goldman advisers to keep existing trade arrangements in place and not "rock the boat."

Now, all that may be about to fall apart.

According to Axios, behind the constant media scandals, "one of the most consequential and contentious internal debates of his presidency unfolded during a tense meeting Monday in the Roosevelt Room of the White House" where with "more than 20 top officials present, including Trump and Vice President Pence, the president and a small band of America First advisers made it clear they're hell-bent on imposing tariffs — potentially in the 20% range — on steel, and likely other imports."

In other words, Trump – true to his campaign promises – is set to launch a global trade wars after all, one where then main country impacted would be China, however the collateral damage would extend to Canada, Mexico, Japan, Germany and the UK.

This change in policy comes from Trump finally understanding the reality that for DECADES, China has manipulated its currency to derive totally unfair trade with the US, while at the same time allowing North Korea to develop nuclear weapons — which they now use to threaten America.  And let's not forget China's building of artificial islands in the South China Sea on which they are placing war-fighting bases and equipment. This is designed to give them total control of $6 TRILLION in trade that ships via the South China Sea, by being able to Deny Access to the US Navy.

China's free ride on trade, failure to act on North Korea and willful actions in the South China Sea are now going to result in China's economy being deliberately CRUSHED by US import Tariffs.  And since China's economy is already under great stress, it will not take long for US policy to have devastating effects in that nation.

What may be even more striking is that Trump overruled his cabinet, as "the sentiment in the room was 22 against and 3 in favor — but since one of the three is named Donald Trump, it was case closed." Axios adds that while "no decision has been made, the President is leaning towards imposing tariffs, despite opposition from nearly all his Cabinet."

Needless to say, if Trump follows through, the outcome would have a profound effect on U.S. economic and foreign policy; Trump will formalize his decision in the coming days.

What is also notable, is that this is the first time  – so far off the record – in which Trump has openly defied his Wall Street establishment advisers, while siding with the Bannon "populist" front:

In a plan pushed by Commerce Secretary Wilbur Ross, and backed by chief strategist Steve Bannon (not present at the meeting), trade policy director Peter Navarro and senior policy adviser Stephen Miller, the United States would impose tariffs on China and other big exporters of steel. Neither Mike Pence nor Jared Kushner weighed in either way.

Everyone else in the room, more than 75% of those present, were adamantly opposed, arguing it was bad economics and bad global politics. At one point, Trump was told his almost entire cabinet thought this was a bad idea. But everyone left the room believing the country is headed toward a major trade confrontation.

As Axios adds, the reason why Trump defied the guidance of his Wall Street-derived advisors is Trump's base "which drives more and more decisions, as his popularity sinks — likes the idea, and will love the fight."

This, more than anything, should send shivers down Wall Street's spine, because for all his bluster and outrageous media outbursts, Trump had largely been in Wall Street's pocket so far.

Not anymore, and with Trump's base hell bent on punishing the 1% (which includes Wall Street), if Trump indeed launches global trade war, his future decisions will become increasingly market unfriendly.

The choice is simple: Keep allowing artificially cheap products (of inferior quality) into the USA, costing more and more US jobs, or get Americans back to work by leveling the playing field by using Tariffs.

POTUS: "Patience is Over with North Korea"

President Trump on Friday said the United States’ “patience is over” with North Korea, calling for an aggressive international effort to curb the rogue state’s nuclear program.

"Together, we are facing the threat of the reckless and brutal regime in North Korea,” Trump said at the White House alongside South Korean President Moon Jae-in. “The nuclear and ballistic missile programs of that regime require a determined response.”

The president didn’t say what specific actions that would include. He did not take questions after speaking with Moon in the Rose Garden following an hourlong meeting.

But Trump stressed that he would take a more aggressive approach than former President Obama, who favored a policy of “strategic patience” to persuade Pyongyang to give up its nuclear ambitions.

“The era of strategic patience with the North Korean regime has failed — many years it has failed — and, frankly, that patience is over,” he said.

The president called on major powers in the Asia-Pacific region, a group that includes China, to slap sanctions on the government of North Korean leader Kim Jong Un and “demand that the North Korean regime choose a better path, and do it quickly, and a different future for its long-suffering people.”

The comments come amid an effort by the Trump administration to ramp up pressure on Beijing to do more to confront North Korea over its nuclear program, which it views as one of the top security threats to the U.S.

On Thursday, the Treasury Department sanctioned a Chinese bank and a handful of Chinese citizens accused of helping North Korea access international financial systems to help fund their nuclear and ballistic missile programs.

"We are in no way targeting China with these actions,” Treasury Secretary Steven Mnuchin told reporters. “This is about North Korea and how serious we are taking this."

Trump earlier this month appeared to vent his frustration at China’s efforts with North Korea.

“While I greatly appreciate the efforts of President Xi & China to help with North Korea, it has not worked out. At least I know China tried!” he tweeted.

In a speech this week laying out the administration’s North Korea policy, national security adviser H.R. McMaster warned that the U.S. is preparing military options.

“The president asked us to prepare a range of options, including a military option that no one wants to take,” McMaster said at a conference in Washington.

Hal Turner's Note: I say "America First."  Impose Tariffs.  Get US manufacturing back in gear.  Get Americans working again.  To hell with China – and with Wall Street.  That's my opinion, what's yours?  Use the comment feature below to have your say. 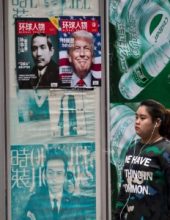