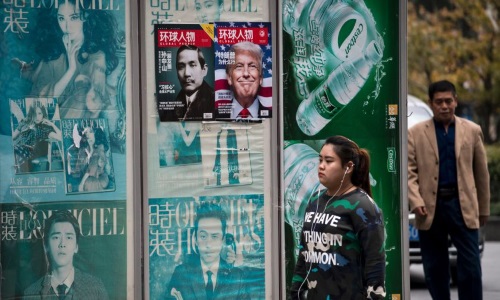 China, disaster to the two countries and the world, war with China

How Trump Could Start a Trade War With China

Friction or confrontations would be “a disaster to the two countries and the world.”

The Chinese Communist Party’s state mouthpiece the People’s Daily said that President-elect Donald Trump shares an obligation to ensure the U.S.-China relationship improves rather than deteriorates, describing the bond between the two economic giants as “too big to fail.”

“It’s not hard to predict that a cooperative China-U.S. relationship will bring huge benefits across the globe,” read an editorial published in the paper Tuesday. “However, if the two nations became entangled in friction, and even in confrontations, it will be a disaster to the two countries and the world.”

After an election campaign in which Trump vowed to label China a currency manipulator, accused the country of stealing U.S. jobs, and threatened to impose trade tariffs, the People’s Daily editorial appears to constitute Beijing’s latest attempt to fortify links with its largest trading partner, Bloomberg reports.

As part of Trump’s plans for his administration’s first 100 days—broadcast on social media Monday—was a pledge to withdraw from the Trans-Pacific Partnership (TPP) free trade deal.

The demise of the TPP leaves the door open for the Beijing-backed Regional Comprehensive Economic Partnership (RCEP), which includes Australia, New Zealand, China, Japan, and 12 other Asian countries—but not the U.S.

Deborah Elms, executive director at the Asian Trade Center told TIME’s Charlie Campbell that Trump’s statement on TPP was “very depressing” and would mean “the end of U.S. leadership on trade and the passing of the baton to Asia.”

Although People’s Daily did not reference the Paris Agreement on climate change, which Trump hasthreatened to junk, it said that agreements with the Obama administration had “laid the foundation for future China-U.S. relations.”