Is the U.S. Prepared for a Biological Attack? Bernie Sanders on Vaccine Purchasing (2001)

Is the U.S. Prepared for a Biological Attack? Bernie Sanders on Vaccine Purchasing (2001)

The Project Bioshield Act was an act passed by the United States Congress in 2004 calling for $5 billion for purchasing vaccines that would be used in the event of a bioterrorist attack. This was a ten-year program to acquire medical countermeasures to biological, chemical, radiological, and nuclear agents for civilian use. A key element of the Act was to allow stockpiling and distribution of vaccines which had not been tested for safety or efficacy in humans, due to ethical concerns. Efficacy of these agents cannot be directly tested in humans without also exposing humans to the chemical, biological, or radioactive threat being treated. In these cases efficacy testing follows the FDA Animal Rule for pivotal animal efficacy.

Since the 2001 terrorist attacks, the United States government has allocated nearly $50 billion to address the threat of biological weapons. U.S. funding for bioweapons-related activities focuses primarily on research for and acquisition of medicines for defense. Biodefense funding also goes toward stockpiling protective equipment, increased surveillance and detection of biological agents, and improving state and hospital preparedness. The increase in this type of funding is mainly for this Project BioShield. Significant funding also goes to Biomedical Advanced Research and Development Authority (BARDA), part of HHS. Funding for activities aimed at prevention has more than doubled 2007 and is distributed to 11 federal agencies. Efforts toward cooperative international action are part of the project.
In September 2012, BioPrepWatch reported that the BARDA annual report shows that the number of supplies of countermeasures for combating terrorist attacks is growing.
According to the report, BARDA has acquired :
107,000 doses of an antitoxin for Clostridium botulinum (a decrease from the full 200,000 doses ordered in 2006).
57,102 doses of the monoclonal antibody Raxibacumab, which treats anthrax, from Human Genome Sciences in 2011. This included 20,000 doses under a 2005 contact and 37,102 doses of the 45,000 ordered in a 2009 contract option. At the end of 2010, there was a total supply of 36,102 doses of Raxibacumab.
10,000 doses of anthrax immune globulin from Cangene, which also treats anthrax. By 2010, the supply was down to 7,327 doses, with spending on Raxibacumab and AIG coming to $478 million.
28.75 million doses of the anthrax vaccine BioThrax from Emergent BioSolutions.
Botulism treatments, as well, including 107,560 doses of Botulinum Antitoxin Therapeutic from Cangene. It ordered 200,000 doses. At the end of 2010, the supply was at 97,000 doses.

On a CNN news broadcast in 2011, the CNN chief medical correspondent, Dr. Sanjay Gupta, weighed in on the American government’s recent approach to bioterrorist threats. He explains how, even though the United States would be better fending off bioterrorist attacks now than they would be a decade ago, the amount of money available to fight bioterrorism over the last three years has begun to decrease. Looking at a detailed report that examined the funding decrease for bioterrorism in fifty-one American cities, Dr. Gupta stated that the cities “wouldn’t be able to distribute vaccines as well” and “wouldn’t be able to track viruses”. He went on to say that movie portrayals of global pandemics, such as Contagion, were actually quite possible and may occur in the United States under the right conditions.
A news broadcast by MSNBC in 2010 also stressed the low levels of bioterrorism preparedness in the United States. The broadcast stated that a bipartisan report gave the Obama administration a failing grade for its efforts to respond to a bioterrorist attack. The news broadcast invited the former New York City police commissioner, Howard Safir, to explain how the government would fare in combating such an attack. He said how “biological and chemical weapons are probable and relatively easy to disperse”. Furthermore, Safir thought that efficiency in bioterrorism preparedness is not necessarily a question of money, but is instead dependent on putting resources in the right places. The broadcast suggested that the nation was not ready for something more serious. 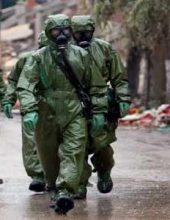 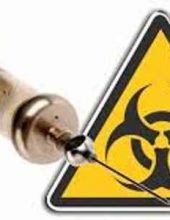 Biological & Chemical Terrorism – Will They Attack Us With a Nerve Gas That can Kill Thousands of People in Minutes? 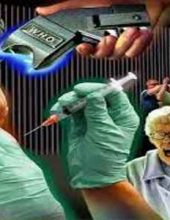 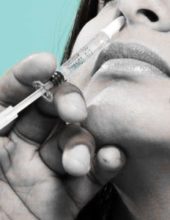