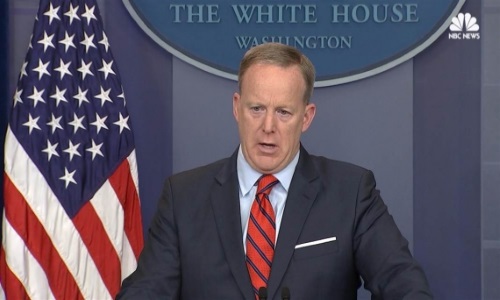 "What the president has done is he's made a decision for us to pursue a certain course," the official told reporters in the White House briefing room, "and that course obviously has a number of options associated with it depending on how the situation develops in the future.

The official, speaking on the condition of anonymity, said Trump plans include "a broad range of options, obviously, across all elements of national power and multinational power in connection with North Korea."

"What you’ve seen is really an integrated effort to prioritize diplomatic and informational aspects of national power, but also what you’ll see soon is using the economic dimension of national power as well as the military preparations that are underway," the official said, barely 100 yards from where the entire U.S. Senate was receiving a briefing on the administration's strategy for North Korea.

Earlier this month the Pentagon ordered the USS Carl Vinson and its escort ships to the waters off the Korean Peninsula, and this week the U.S. military deployed the THAAD anti-ballistic missile system in South Korea to respond to North Korea's continued missile tests and nuclear development. But the comments from the official indicated that more dramatic action is being contemplated. Trump Administration officials have escalated their rhetoric against North Korea in recent weeks, emphatically maintaining the right to launch a unilateral strike against that country's nuclear and ballistic missile programs.

Asked by a reporter to clarify what preparations are underway, the official declined to provide more information, saying, "I don't think we're going to describe those in any detail."

Among the options, the official said, the administration is considering placing North Korea back on the list of state sponsors of terrorism. The official said the economic component of the strategy involves further working to deprive North Korea of access goods needed to develop the programs in violation of UN sanctions.

We believe North Korea will attempt to attack the United States as soon as it has the military capabilities.

With every test, Kim grows closer to his goal which is using nuclear weapons on U.S. Cities.

In the language of Diplomacy, these words are a "Casus Beli"  which is the Latin phrase for "Cause for War."   These types of words are _never_ used lightly by any nation-state.  As such, the media inquired of Admiral Harris if a pre-emptive strike would be too dangerous considering South Korean casualties, Harris replied:

“I would say what we’re faced with is a lot more Koreans and Japanese and Americans dying if North Korea achieves its nuclear aims and does what [Kim Jong-un] has said it’s going to do,” Harris said.  (end of briefing)

To anyone who has been following events on the Korean Peninsula, these are ominous developments.  Unless North Korea ceases its rhetoric about attacking the US, and returns to the negotiating table to denuclearize, war is now EXTREMELY LIKELY, perhaps beginning as early as June.

THe world already knows that the USS Carl Vinson and its strike group of Destroyers, Guided Missile Cruisers and at least one nuclear-powered missile submarine are in the region.  What few know is that the USS Nimitz and its strike group, have cleared their most-recent "Blue Water test" and are now officially deployable from southern California.  A trip to the Korean area would take 7 days for the Nimitz and her strike group.

What even fewer know is the USS Ronald Reagan aircraft carrier and her strike group are currently in port in Yokosuka, Japan undergoing maintenance, scheduled to be finished in early June.

And what no one knew until this moment is the USS Theodore Roosevelt aircraft carrier and her strike group are not far away from the Korean region!

Of course, the public already knows the US sent its latest F-35 to the US Marine Corps base in Japan.  But few know the US sent three B-2 Stealth Bombers from Whiteman Air Force Base on Monday to a "classified destination."

There is a very substantial military build-up by the U.S. taking place in relation to North Korea.  VERY Substantial!  The kind of build-up one might expect to see if the US is going to war.

In this context, it should also be noted the US has called-for and conducted meetings with the UN Security Council over the "North Korean Issue", with members of the Security Council having also been invited to the White House for private talks.  The entire 100 member US Senate was briefed in the White House yesterday, and later yesterday the entire US House of Representatives was briefed in secret at the US Capital.

Russia has deployed troops and tanks to its 11 mile border with North Korea, and yesterday, satellites picked-up the digging of trenches by the Russians along the border.

Nations do not engage in these types of activities for nothing.

There is a very strong probability that a hot war is coming . . . . perhaps this June.