A temporary government spending bill is expected to clear the House and Senate just before a midnight deadline on Wednesday, averting a government shutdown and providing funding until December 11. As a precaution, House lawmakers have invoked “martial law.”

The use of martial law fast-tracks a spending bill by bypassing typical procedures. One of those procedures is that the House of Representatives has to wait a day after the Rules Committee produces rules for a floor debate before a vote on the bill can occur, according to the Hill. By invoking martial law, House lawmakers can vote on the short-term government spending measure on the same day.

Amidst leadership turmoil in the House – Speaker John Boehner (R-Ohio) announced he would resign at the end of October – the Senate advanced a bill on Monday to fund the government through December 11. With a bipartisan vote of 77 to 19, the motion surpassed the 60 votes required to eliminate a filibuster threat. It’s now headed for a final vote on Wednesday.

The short-term spending measure is still controversial in the House and may draw “no” votes from Republicans who are critical of their leaders for backing away from the removal of federal funding from Planned Parenthood. Conservatives have railed against the female health clinic ever since videos emerged allegedly showing representatives discussing the sale of fetal tissue from abortion procedures.

Senator Rand Paul (R-Kentucky), also a Republican presidential candidate, took to the floor on Tuesday and urged leaders to “show courage,” and be willing to “let the spending expire.”

Passage of the stopgap measure buys lawmakers several weeks to cut deals on a long-term government funding bill, a hike to the debt ceiling, highway construction funding, and renewal of the Export-Import Bank. It also gives them time to address tax provisions that are expiring.

The shutdown could cause 46 million Americans to go hungry  : 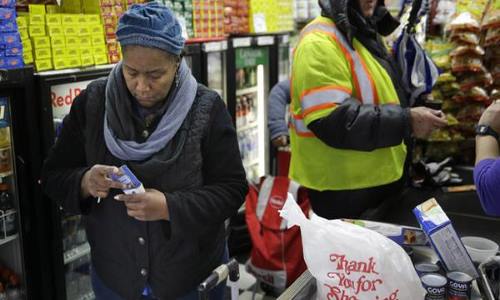 The last government shutdown lasted 16 days, from September 30 to October 17, 2013. A disagreement arose over the inclusion of language defunding or delaying the Patient Protection and Affordable Care Act, also known as Obamacare. Republicans wanted to defund the healthcare law while Democrats refused. At the time, an agreement was reached to pay active military personnel and back wages for furloughed employees, plus small funding measures for high-profile functions, including veterans’ services, FEMA and supplements for women and children, among other temporary fixes.

Without action by Congress on Wednesday, the government will shut down on October 1.