One sign of the tumult occurred this month when oil bubbled up to the surface, damaging a road in Yellowstone National Park, a result of extreme heat from the thermal activity below.

“It basically turned the asphalt into soup,” the park spokesman, Dan Hottle, told USA Today. “It turned the gravel road into oatmeal.”

Yellowstone covers nearly 3,500 square miles and contains 10,000 geothermal features, one half of all the known features of that kind in the world. The park also has 300 geysers, the largest concentration in the world. “Old Faithful,” the world’s best known geyser, blasts thousands of gallons of boiling hot water between 100 and 200 feet into the air every 60 to 90 minutes.

What is driving this geologic wonder?

Below the park is what geologists call a “supervolcano,” a massive chamber of molten rock, called magma, that packs tremendous energy.

The Yellowstone Caldera, or cauldron, sits on top of North America’s largest volcanic field. Four hundred miles under the Earth’s surface is a magma ‘hotspot’ that reaches up to just 30 miles below ground level before spreading out over an area of 300 miles across three states.

Yellowstone's ultimate heat source reaches down 440 to 1,800 miles beneath Earth's surface — and may come from its molten core. It is responsible for fueling the newly discovered reservoir that lies on top of it.

The magma chamber, which scientists already knew about, lies on top of the reservoir — and draws magma from it. It is a three to nine miles under the surface of the Earth and is what fuels the geysers, steaming puddles and other hot attractions.

It alone has a volume 2.5 times that of the Grand Canyon.

But those great magma expanses do not mean that the two hellish hollows could overflow the Grand Canyon with molten rock.

The explosions have left deep scars, and park goers often become familiar with one — the Yellowstone Caldera, which takes up much of the park and is lined by a roundish mountainous ridge.

The caldera is a volcanic crater some 40- by 25-miles large, left behind when 240 cubic miles of debris ruptured out of the Earth and into the air during volcanic discharge some 630,000 years ago, USGS says.

Lava flowed into the breach, filling it, which may account for the lack of a deeper crater.

Long before that, 2 million years ago, volcanic activity blew 600 cubic miles of Yellowstone debris into the air.

Those were the two largest eruptions in North America in a few million years, the USGS said, and they each buried in ash more than a third of what is now the continental U.S.

"If another large caldera-forming eruption were to occur at Yellowstone, its effects would be worldwide," the USGS says. It would drastically shift the world's climate.

“Our best evidence is that the crustal magma chamber is filling with molten rock, but we have no idea how long this process goes on before there either is an eruption or the inflow of molten rock stops and the caldera deflates again,” he said.

Smith insists that even though the volcanic formation is massive, there is absolutely no need to panic.

“We create scenarios. We know roughly what to expect of the patterns of time and space of the earthquakes ground information. Again, acquired from other experiences around the world, we use that to interpret our own data in terms of what the potential threat or risk might be,” he said.

So, it's no wonder scientists have cast an eye on Yellowstone for a while.

The Utah researchers gave the Yellowstone's magma bowels a sort of CT scan, said lead researcher Hsin-Hua Huang. Volcanic activity triggers 2,000 to 3,000 small earthquakes per year, and the shake and shock waves travel at different speeds through molten, hot and other rock.

It allowed them to develop a detailed model of the seething expanse beneath Yellowstone that makes it what it is. Here are the upper magma chamber and lower magma reservoir by the numbers.

The upper chamber, which caused the historic blasts and is closest to the surface, is 2,500 cubic miles in volume and measures about 19 by 55 miles. The lower reservoir, which has a volume of 11,200 cubic miles, measures about 30 by 44 miles and is about 16 miles thick. 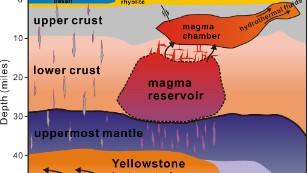 Even if the next explosion is many thousands of years away, Yellowstone's cavernous heat tanks poke up an occasionally surprise. The last lava flow was some 70,000 years ago, USGS says.

But more recently in 2016, ground temperatures rose high enough to dry out geysers and boil the sap in some trees. A few inches under the surface, thermometers recorded a temperature of 200 degrees Fahrenheit — nearly hot enough to boil water.

So, national park authorities closed Yellowstone to keep people from burning their feet — or basting their tires on melting roads.

“Before the super eruption, large earthquakes would likely swarm the surrounding areas until the huge blast that would erase Yellowstone completely off the map.”

Farrell said it would be a “global event.”

“There would be a lot of destruction and a lot of impacts around the globe,” he said.

Most scientists agree that when the Yellowstone volcano does erupt, the results will be catastrophic.

By some estimates, 87,000 people would die immediately.

Thousands of cubic miles of red-hot volcanic ash would cover the Western United States and shoot into the atmosphere.

Light from the sun would be blocked, making global temperatures plummet into a prolonged “nuclear winter.”

The entire grain harvest of the Great Plains would virtually disappear in a matter of hours, since it would be coated in ash, threatening a substantial portion of the world’s food supply.

If temperatures plummet by the 21 degrees they did after the Toba volcano eruption in Sumatra of ancient times, the Yellowstone supervolcano eruption could truly be an extinction-level event

It is estimated that a full-blown eruption of Yellowstone could leave two-thirds of the United States completely uninhabitable.

Just before the eruption, the pressure underground will build and the magma will rise, forcing its way out of the ground, sending lava and sulfuric acid gas into the air. The blast will also propel ash up to 20 miles into the atmosphere where the easterly jetstream would carry it as far away as Europe in as quickly as three days.

The gas, the source for acid rain, would remain in the atmosphere for years, screening out sunlight, causing global temperatures to drop and killing crops for years afterward.

Even a small amount of ash would close airports, cause damage to vehicles and houses, and contaminate water supplies.

The ash resulting from the 2010 eruption of the Eyjafjallajökull volcano in Iceland caused the largest air traffic shutdown since World War II.

The book “Supervolcano” includes an in-depth, fictional account of a super eruption.

According to the book:

Within days and weeks of the supereruption, the suspension of air routes, the inability to bring cargo in and out of the most deeply affected areas, and the virtual decimation of the Grain Belt, the area of our nation responsible for the vast majority of our grain food sources, all contribute to a growing sense of desperation and panic among survivors anxious to find food.

It only takes 0.04 inches of ash to close airports, and the wide swath of blanketed ash would literally shut down every major and minor airport for thousands of miles across the country.

Because even a small amount of ash can clog an engine, road transportation is heavily curtailed, and trucks and machines normally engaged in the moving of supplies from one state to another find themselves immobilized.

The book also describes subsequent food riots, contaminated water and an outbreak of violence and anarchy. Although North America would be the hardest hit, the explosion would affect the entire planet.