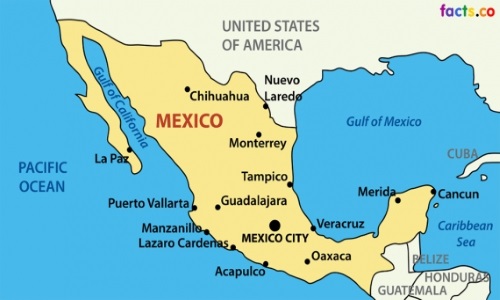 In a remarkable display of third-world values, the government of Mexico is considering "seizing" (i.e. stealing) $100 Billion in U.S. Corporate or Individually-owned Assets if President Trump builds a border wall or withdraws from the NAFTA agreement!  U.S. may have to invade Mexico – again.

Peña hasn't commented on the wall publicly since the U.S. election. But his former Foreign Secretary, Claudia Ruiz Massieu, replaced on Jan 4 2016, has. “We’ve been very clear on the fact that Mexico will never consider paying for a wall," she told PBS Newshour. Ruiz was replaced by former Finance Secretary Luis Videgaray. He resigned a week after Mr Trump's visit to Mexico City last summer, a vist that was widely criticized in Mexico. Videgaray was instrumental in arranging Trump's visit.

Miriam Grunstein is an attorney and former advisor to the Mexican Senate on energy and international law. Legislation has been proposed at the Mexican Senate that bans the use of public funds on any project that is “against the country’s interest." That's widely taken to mean the wall.

"Just because of, you know, tantrums, we could really waste a golden opportunity of uniting," Grunstein said.

The proposed Mexican legislation would lead to a review of some of the most fundamental treaties between the two countries, among them the 1848 Treaty of Guadalupe. The treaty ceded Texas and California, as well as parts of Arizona, Colorado, New Mexico, Nevada, Utah and Wyoming to the U.S.

The bill also states, "in cases where the assets of our fellow citizens or companies are affectedby a foreign government, as Donald Trump has threatened, the Mexican government should proportionally expropriate assets and properties of foreigners from that country on our territory."

Translated that means that should Trump follow through on threats to expand the wall, withdraw U.S. participation in NAFTA or stop remittances, Mexico could target U.S. assets in Mexico. Those assets are estimated by the Office of the U.S. Trade Representative to amount to over $100 billion.

Ignacio de Moral doesn’t believe it will ever come to this. He supervises the federal government's economic development plans in the state of Veracruz. "It will take years, longer than he'll be president, to build a wall," he said in Spanish. "There won't be a wall."

Even senior U.S. politicians have cast a degree of doubt on the idea.

Texas Republican Congressional Rep. Pete Sessions has said the wall is “an analogy” for fences and drones. But in Mexico, the wall is part of a suite of political and economic threats against Mexico.

Jeff Abrego is a hedge-fund manager in Mexico City. He said Mexico’s wary after the U.S. election. "It's shaken the confidence here in the country from an economic standpoint right to its foundation, to its core," Abrego said.

The wall has become a staple on the country's talk shows. Luis Cárdenas told his audience on MVS Radio that not all Americans are like-minded. "It's not the entire U.S. that wants the wall," Cárdenas said on one broadcast. "Just a part."

But Mexicans are braced for some form of this campaign pledge coming true. A man who entered the U.S. illegally before returning, José Arellano, said one group of Mexicans wants the wall built. And that’s organized crime.

"More power to the mafias," Arellano said in Spanish.

"The remaining routes for illicit trafficking will become far more valuable," Hope said. "And that probably means more conflict on the Mexican side." Hope has good contacts in the Mexican intelligence community. He served on former president Vicente Fox's transition team.

If the wall is substantively expanded, Hope, a former senior intelligence analyst at Mexico's civilian intelligence agency CISEN, said he believes it will also slow cooperation with the U.S. on existing arrangements on border security and immigration.

SuperStation95 asked our sources in the Pentagon and in the State Department abut this and both seemed amused.  Said one Pentagon official who asked to remain anonymous because he is not authorized to speak publicly about it

"We can invade and conquer all of Mexico in less than a month; a lot faster than it took the last time we invaded them."

"This shows how foolish it was for American corporations to ever even consider moving operations to Mexico.  Companies are strongly advised to immediately begin removing assets from that country because the wall will be built and NAFTA will be re-negotiated or cancelled."

When told of these developments by SuperStation95, Financial gurus in New York City from Goldman Sachs,  JP Morgan and CitiGroup, all of whom demanded absolute anonymity as a condition of speaking to us, said this is nothing short of a complete disaster for financial markets.

"We and everyone else in the US have to pull all our investments out of Mexico immediately for fear they will try to "expropriate" them.  Money is going to flee from Mexico so fast next week, they'll be lucky to have a country left when it's done. By even daring to suggest such a thing, the Mexican government has literally destroyed itself in one day . . . they just don't realize it yet."

Foreign Currency Executives we spoke with here in New York City said this will cause a full scale collapse of the Mexican PESO since foreigners will no longer want to hold the currency for any reason whatsoever.

"If  a foreigner owns a currency account, the Mexican government just put them on notice their account may be expropriated.  The PESO will sell off to dirt very fast."