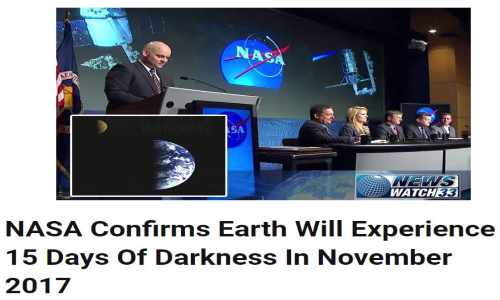 NASA has confirmed that there will be 15 days of total darkness in November 2017 because of an astrological event caused by Jupiter and Venus.

NASA will have you believe that you're living on a spinning ball hurdling through "space" at 10,000 miles an hour and the "universe" never changes. Controlling the sheep has never been easier.﻿
Similar claims that there would be 15 days of total darkness were made in November 2015 and in June 2017 . They both proved to be false before the most recent version, that earth would see 15 days of total darkness from November 15 to November 30, emerged in August 2017.

The latest rumor appears to have started with a report that appeared at two websites, Global Revolution Network and Reflection of the Mind, back in January 2017. The report claims that former NASA Administrator Charles Bolden  delivered a 1,000-page report to the White House on the rare astronomical event:

According to experts this blackout will be caused by an astronomical event between Jupiter and Venus. There was even a detailed 1000 pages document written by Charles Bolden, head of NASA explaining the strange event to officials at the White House.

According to the report, during this specific period Jupiter and Venus will come in close proximity of each other and will be separated by just 1 degree. Venus will move to the south-west of Jupiter and as a result it will shine 10 times brighter than Jupiter. Venus’ bright light will heat up the gases in Jupiter causing a reaction which will release a an absurdly high amount of hydrogen into the space. This reaction will come in contact with our Sun at 2:50 am on November 15th.

None of those claims are based in reality, but Jupiter and Venus will appear close together in the night sky on November 12, 2017. The phenomenon, known as “The Conjunction of Venus and Jupiter,” will make the two planets close enough to view in the same telescope viewer, IntheSky.org reports:

From Washington, the pair will be difficult to observe as they will appear no higher than 8° above the horizon. They will be visible in the dawn sky, rising at 06:03 (MDT) – 1 hour and 9 minutes before the Sun – and reach an altitude of 8° above the south-eastern horizon before fading from view as dawn breaks at around 06:54.

The pair will be close enough to fit within the field of view of a telescope, but will also be visible to the naked eye or through a pair of binoculars.

You would first notice it would get pretty cold, pretty quickly (since there is no sun to head the surface and atmosphere on earth)
• No sun means no photosynthesis and those cold temperatures sure wouldn’t help anything grow (so I guess no more plants or food for us!)
• Finally, if the sun decided to take a vacation for a week – the gravitational effect on us and other planets would be monumental. Without gravity, our planet would just float off into space.

In the end, the Conjunction of Venus and Jupiter will bring a rare opportunity to see the planets close together in the night sky, will be 15 days of total darkness in November 2017?

This video is just opinion,prediction based on news and by scientist.

THIS IS THE REAL REASON FOR DARKNESS ON NOV