Even though we are constantly being told by scientists to not worry about the Yellowstone supervolcano, NASA is now on a mission to save the earth from exactly that. NASA has ambitious plans to prevent the extinction of the human race by drilling into the supervolcano.

According to the BBC, NASA researchers got in touch with the media outlet to detail the threat lurking beneath Wyoming’s crust and what they think they can do about it before it eliminates humanity.  NASA contacted the BBC after they published an article about supervolcanoes last month.

There are around 20 known supervolcanoes on Earth, with major eruptions occurring on average once every 100,000 years. One of the greatest threats an eruption may pose is thought to be starvation, with a prolonged volcanic winter potentially prohibiting civilization from being able to grow enough food for the current population. In 2012, the United Nations estimated that food reserves worldwide would last a mere 74 days after such an event.

“I was a member of the NASA Advisory Council on Planetary Defense which studied ways for NASA to defend the planet from asteroids and comets,” explains Brian Wilcox of NASA’s Jet Propulsion Laboratory (JPL) at the California Institute of Technology. “I came to the conclusion during that study that the supervolcano threat is substantially greater than the asteroid or comet threat.”

NASA scientists approached the “problem” of the Yellowstone supervolcano (the problem we are told isn’t actually a problem and that we have nothing to worry about) from a heat standpoint. They assumed cooling down the supervolcano would prevent its eruption.

Yellowstone currently leaks about 60 to 70 percent of its heat into the atmosphere through stream water which seeps into the magma chamber through cracks, while the rest of the heat builds up as magma and dissolves into volatile gasses. The heat and pressure will reach the threshold, meaning an explosion is inevitable.

And they [NASA scientists] have devised a risky plan that could end up blowing up in their faces.  Literally.

Wilcox hypothesized that if enough heat was removed, and the temperature of the super volcano dropped, it would never erupt. But he wants to see a 35% decrease in temperature, and how to achieve that, is incredibly risky. One possibility is to simply increase the amount of water in the supervolcano. As it turns to steam. The water would release the heat into the atmosphere, making global warming alarmists tremble. –SHTFPlan

The plan is to drill into the supervolcano. “Yellowstone currently leaks around 6GW in heat,” Wilcox said. “Through drilling in this way, it could be used to create a geothermal plant, which generates electric power at extremely competitive prices of around $0.10/kWh. You would have to give the geothermal companies incentives to drill somewhat deeper and use hotter water than they usually would, but you would pay back your initial investment, and get electricity which can power the surrounding area for a period of potentially tens of thousands of years. And the long-term benefit is that you prevent a future supervolcano eruption which would devastate humanity.”

But Wilcox also admits that this plan is incredibly risky. It could trigger the very event that NASA wishes to prevent.  “The most important thing with this is to do no harm,” Wilcox said, according to the BBC. “If you drill into the top of the magma chamber and try and cool it from there, this would be very risky. This could make the cap over the magma chamber more brittle and prone to fracture. And you might trigger the release of harmful volatile gases in the magma at the top of the chamber which would otherwise not be released.”

Wilcox added that this is along a painstaking endeavor to be undertaken. But he thinks the rewards of drilling into the Yellowstone supervolcano out weight the risks of humanity’s extinction. “Yellowstone explodes roughly every 600,000 years, and it is about 600,000 years since it last exploded, which should cause us to sit up and take notice,” Wilcox added. (SOURCE ) 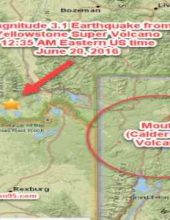