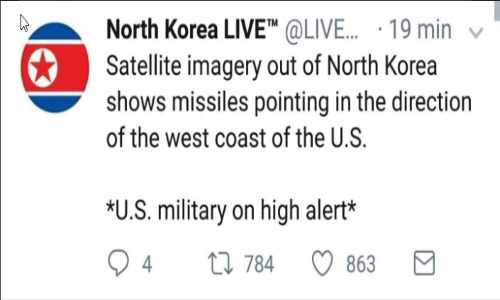 Multiple reports coming out of east Asia say North Korea has decided they have "no choice but to use military force" and are presently aiming long-range missiles at the west Coast of the United States.

"US provocations leave the DPRK with no other choice than to use military force."

Earlier today, we reported North Korea had deployed at least 6 missiles on Transporter/Erector/Launcher (TEL) vehicles and moved them to differing parts of his country.

There is a small possibility that Kim has decided that war is inevitable. In that case, he will probably do as Russian President Vladimir Putin has said. Putin said that he learned in street fighting as a kid, that "if a fight is inevitable, it's best to throw the first punch."

This is, sadly, consistent with the spreading out of many locations and missiles at once. If Kim is going to try anything serious, it would be best to have many decoys to make it harder to find the real payloads.

Strange reports are also coming out claiming the North Korean missiles are "aimed at the US West coast" as shown above.

This seems bizarre since an Intercontinental Ballistic Missile (ICBM) would typically be aimed straight up to achieve orbit, then release its payload, which then steers to it's target before re-entering earth's atmosphere.

It is possible, however, that North Korea does not believe their warheads would survive the heat and stress of re-entry into the atmosphere, and are thus actually "aiming" the missiles for a sub-orbital flight across the Pacific.

This would be odd, but achievable.

On Saturday, Kim Jong-un’s regime sent a chilling warning shot to the US President telling him

“the US mainland will be reduced to ashes”

The warning, pumped out by the communist state's propaganda machine, is the latest escalation by North Korea in threats of nuclear war against the US.

It came after two Air Force supersonic heavy bombers flew over the Korean peninsula in a show of force against Pyongyang on Tuesday night.

North Korean state media on Friday renewed a threat to launch missiles toward the US territory of Guam, warning that “reckless moves” by the US would compel Pyongyang to take action.

North Korea first said it was examining a plan to target the Pacific island in August after US President Donald Trump warned the isolated regime would “face fire and fury like the world has never seen” following a US intelligence assessment that North Korea had produced a miniaturized nuclear warhead.

“We have already warned several times that we will take counteractions for self-defense, including a salvo of missiles into waters near the US territory of Guam,” the KCNA report quoted Kim Kwang Hak, a researcher at the Institute for American Studiesof the North Korean Foreign Ministry, as saying.

“The US military action hardens our determination that the US should be tamed with fire and lets us take our hand closer to the ‘trigger’ for taking the toughest countermeasure,” Kim added.

The latest warnings from Pyongyang follow weeks of rising tensions, which promise to escalate further when US and South Korea joint naval exercises begin Monday.

Joint military exercises are particularly infuriating to Pyongyang. The North Korean government views them as a dress rehearsal for an invasion — even as the US insists they are purely defensive in nature.

The KCNA report listed a string of perceived US provocations — including a litany of bombastic threats from President Trump, recent deployments of a US guided-missile submarine and aircraft carrier to the region, and a new round of “high intensity” US and South Korea joint naval drills.

The article ended with a familiar warning: that the US would be solely responsible for “pushing the situation on the peninsula to the point of explosion.”

It would be easy to dismiss this as more bluster from Pyongyang. But North Korea’s latest message indicates the regime may be ready to carry out what would be its most provocative missile test to date — firing four missiles over Japan and landing around 30 to 40 kilometers (18 to 25 miles) off the coast of the tiny island.

North Korea’s Supreme Leader Kim Jong Un has never ruled out the plan to fire missiles into the waters off Guam. During an August 14 inspection of the Strategic Force of the Korean People’s Army, Kim said he would watch for continued “reckless” behavior by the US before making a decision.

Tensions have only escalated since.

In his remarks at the UN last month, Trump threatened to “totally destroy” North Korea and adopted a demeaning nickname for the North Korean leader — referring to him as “Rocket Man” and subsequently “Little Rocket Man.”

Nothing enrages Pyongyang more than perceived affronts to their “Supreme Dignity” — a reference to leader Kim Jong Un — who is revered above all else in the authoritarian nation. North Korea’s Foreign Minister Ri Yong Ho responded by calling Trump “President Evil” and “mentally deranged.”

Ri told Russian state news agency TASS this week Trump has “lit the wick of war” against North Korea. He also ruled out the possibility of diplomacy between the US and North Korea.

“The current situation — when the US resorts to maximum pressure and sanctions, to outrageous military threats against the DPRK — is not at all an atmosphere to negotiate,” Ri said, according to TASS.

Ri’s words should be taken seriously. He was recently promoted to a full voting member of North Korea’s politburo; its highest-level decision-making body. His words are coming directly from the top echelons of North Korean leadership.

White House Chief of Staff John Kelly warned Thursday that Americans should worry about North Korea having the ability to reach the United States with an intercontinental ballistic missile.

He told reporters that if the threat grows “beyond where it is today, well, let’s hope that diplomacy works” — just the latest in a series of cryptic messages from the Trump administration.

Last week, Trump described a meeting of top military leaders as “the calm before the storm” — later acknowledging the comment was a reference to North Korea.