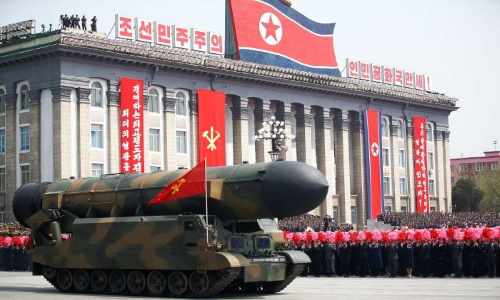 North Korea has accused the US and Japan of bringing “the raging wind of war” to the peninsula, while warning the Trump administration over any maritime blockade of the country.

State media also said Pyongyang would regard any maritime blockade by the United States as an act of war.

President Trump on Friday announced a fresh round of sanctions against North Korea in an attempt to block oil and other prohibited products from getting to the Asian nation.

“We have imposed the heaviest sanctions ever imposed,” Trump said at the conclusion of his speech to the Conservative Political Action Conference in Oxen Hill, Md., just outside Washington. “Hopefully, something positive can happen. We will see.”

More than 50 ships and shipping companies were cited by the Treasury Department for evading existing U.S. and international sanctions. While most of those name were based in North Korea, companies and ships from China, Singapore, Taiwan, Panama, Tanzania, the Marshall Islands and the Comoros were also included.

The measures are part of the administration’s “maximum pressure campaign” on North Korea and are designed to put pressure on the country for its expanding nuclear weapons program.

Despite the ongoing efforts by the U.S. administration, North Korean leader Kim Jong Un has insisted his country will never give up the nuclear program and has been making rapid advances over the past year.

“The US and Japanese reactionaries must not act recklessly, keeping in mind that if they dare to provoke the DPRK… with a wrong view of the changed world, they will only put their security and existence in jeopardy,” state media quoted a government spokesman as saying.

The official used the initials of the North’s official name, the Democratic People’s Republic of Korea.

The report said the statement was issued “as the US and Japan are going to extreme lengths to bring the raging wind of war to the Korean peninsula.”

On Friday, the US said it was imposing its largest package of sanctions aimed at pressuring North Korea into giving up its nuclear and missile programs.

Donald Trump warned of a “phase two” which could be “very, very unfortunate for the world” if the steps did not work.

The US Treasury Department sanctioned one person, 27 companies and 28 ships.

The sanctions’ targets include a Taiwan passport holder, as well as shipping and energy firms in mainland China, Hong Kong, Taiwan and Singapore. The actions block assets held by the firms and individuals in the US and prohibit US citizens from dealing with them.

North Korea accused the US of trying to undermine an improvement in inter-Korean relations.

“Thanks to our supreme leadership’s noble love for the nation and strong determination for peace, long-awaited inter-Korean dialogue and cooperation have been realized and the Olympics took place successfully by the inter-Korean collaboration,” the North’s KCNA news agency said, citing North Korea’s ministry of foreign affairs.

“On the eve of closing of the Olympics, United States is running amok to bring another dark cloud of confrontation and war over the Korean peninsula by announcing enormous sanctions against the DPRK,” the state news agency added, using the initials of the North’s official name, the Democratic People’s Republic of Korea.

Despite the bellicose remarks, members of a high-level North Korean delegation visiting South Korea for the closing ceremony of the Pyeongchang Winter Olympics said the North was open to talks with the US, the South’s presidential office said.

In a meeting with South Korea’s President, Moon Jae-in, in an undisclosed location in Pyeongchang, the North’s delegation also said developments in relations between the two Koreas and those between North Korea and the US should go hand in hand, the Blue House said in a statement.

You’ll also get a year-long stock of healthy food customized to YOUR family’s needs and likes, even delicious treats for kids… so you can stop spending hundreds on toxic cans or MREs (such as MSG-filled instant soups)

… And to make it complete… you’ll be cutting $$$ off your electricity bills with a long-lost food-preserving technique that only the Amish still use in North America… use it and you can make meat, dairy, and eggs last for months without refrigeration!