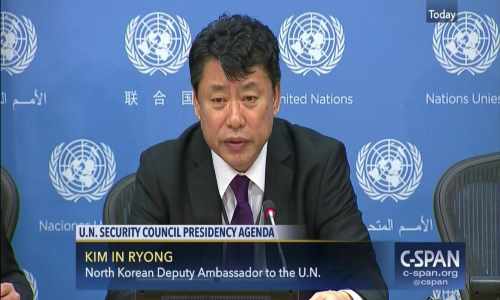 UNITED NATIONS –  North Korea's deputy U.N. ambassador says the situation on the Korean peninsula "has reached the touch-and-go point and a nuclear war may break out any moment."

Kim In Ryong told the U.N. General Assembly's disarmament committee Monday that no country in the world except North Korea has been subjected to "such an extreme and direct nuclear threat from the U.S." — and his country has the right to self-defense.

He said this year North Korea became a "full-fledged nuclear power which possesses the delivery means of various ranges, including the atomic bomb, H-bomb and intercontinental ballistic rockets."

Kim warned that "the entire U.S. mainland is within our firing range"

He pointed to large-scale military exercises every year using "nuclear assets" and said what is more dangerous is what he called a U.S. plan to stage a "secret operation aimed at the removal of our supreme leadership."

Russian President Vladimir Putin said Monday that his country is curtailing economic, scientific and other ties with North Korea in line with U.N. sanctions, and the European Union announced new sanctions on Pyongyang for developing nuclear weapons and ballistic missiles.

U.S. Secretary of State Rex Tillerson said Sunday that diplomatic efforts aimed at resolving the North Korean crisis "will continue until the first bomb drops." His commitment to diplomacy came despite President Donald Trump's tweets several weeks ago that his chief envoy was "wasting his time" trying to negotiate with North Korean leader Kim Jong Un, whom he derisively referred to as "Little Rocket Man."

North Korea's deputy U.N. ambassador called his country's nuclear and missile arsenal "a precious strategic asset that cannot be reversed or bartered for anything."

"Unless the hostile policy and the nuclear threat of the U.S. is thoroughly eradicated, we will never put our nuclear weapons and ballistic rockets on the negotiating table under any circumstances," Kim said.

He told the disarmament committee that the Democratic People's Republic of Korea — North Korea's official name — had hoped for a nuclear-free world.

Instead, Kim said, all nuclear states are accelerating the modernization of their weapons and "reviving a nuclear arms race reminiscent of (the) Cold War era." He noted that the nuclear weapon states, including the United States, boycotted negotiations for the Treaty on the Prohibition of Nuclear Weapons that was approved in July by 122 countries at the United Nations.

"The DPRK consistently supports the total elimination of nuclear weapons and the efforts for denuclearization of the entire world," he said. But as long as the United States rejects the treaty and "constantly threatens and blackmails the DPRK with nuclear weapons … the DPRK is not in position to accede to the treaty."

A North Korean official reaffirmed Pyongyang's commitment to developing a long-range intercontinental ballistic missile capable of reaching "all the way to the East coast of the mainland US," on Monday, telling CNN that the rogue nation is currently not interested in diplomacy with the US until it achieves that goal.

North Korea is not ruling out diplomacy, but "before we can engage in diplomacy with the Trump administration, we want to send a clear message that the DPRK has a reliable defensive and offensive capability to counter any aggression from the United States," the official said. 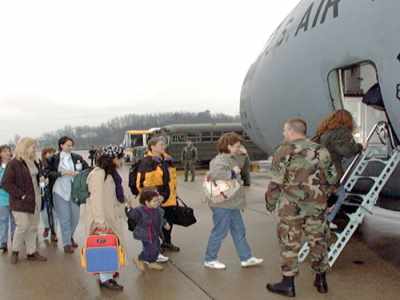 U.S. military begins "practicing" evacuation of noncombatant Americans from South Korea, "in case of an emergency"

On Monday, the United States military began "practicing" the evacuation of non-combatant Americans from South Korea.  This "practice" is allegedly being done "in case of an emergency."

“Nuclear Showdown” author Gordon Chang explained why he believes the U.S. is preparing to go to war with North Korea.

“We are practicing the evacuation of American citizens. We are also doing something even more extraordinary and that is we are looking at a Taiwanese ship because we want to know if it would serve as a good hospital vessel for us. And that means that the Pentagon really is thinking about going to war and what we would have to do to protect Americans,” he told FOX Business’ Kennedy on “Kennedy.”

During an interview with CNN over the weekend, Secretary of State Rex Tillerson said the U.S. will continue its diplomatic efforts with the hermit kingdom until “the first bomb drops.”