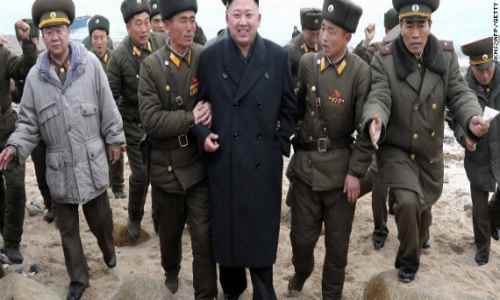 North Korea's foreign ministry released a statement accusing the United States of planning preemptive airstrikes "by August" and vowing to treat such an assault as an act of war.

On Thursday, a spokesman for North Korea’s Foreign Ministry accused the Obama administration of planning airstrikes to destroy the country’s nuclear facilities in a “blatant war of aggression.”

Pyongyang’s state-controlled KCNA news agency claims the spokesman has evidence that Washington is openly considering a bombing campaign to degrade North Korea’s nuclear capabilities, raising the stakes for an all-out war on the Korean peninsula.

“The fact that the United States is openly discussing ‘precision strike operations’ is a sign it is on the brink of taking an extremely reckless step,” the spokesman said. “The fact the operation was made public ahead of the US-South Korea joint military exercise, the dangerous ‘scenario of war’ taking place in August, cannot be overlooked.”

Relations between the United States and North Korea have been strained since 2002, when then- President George W. Bush included the country in the “Axis of Evil,” along with Iraq and Iran. The unstable regime of then-leader Kim Jong-il feared that an attack from Washington was imminent and stepped away from nuclear nonproliferation and anti-ballistic missile arrangements.

In recent months, Pyongyang has criticized the United States and South Korea over massive war games held near the North Korean border as being “dress rehearsal for a full-scale invasion.”

North Korea has responded with a series of nuclear and ballistic missile tests while moving to reinstitute the Yongbyon nuclear weapons facility. The DPRK also claims it has successfully achieved nuclear miniaturization, creating an atomic warhead small enough to be delivered by an intercontinental ballistic missile.

Pyongyang also claims to be nearing targeted ballistic missile capabilities to carry out a nuclear launch against the United States. While South Korea has described recent tests as failures, defense analysts suspect that the North Korean missile tests are designed to look like failures by focusing on specific ballistic missile capacities in order to mask the program’s advanced development.

Pyongyang continues to view the United States as an existential threat, a sentiment that has been heightened in the wake of US flyovers conducted by B-2 and B-52 nuclear armed bombers.

If North Korea is correct about the United States’ intentions to conduct a precision strike on their nuclear facilities, it would represent a surprisingly aggressive maneuver for the Pentagon. American defense experts have suggested that Pyongyang would respond to such an attack as an act of war and would blanket Seoul with chemical and biological weapons, with conservative death toll estimates exceeding 250,000 on the South Korean side — a scenario Washington would unlikely be willing to gamble with. (source)

READ MORE : George Soros Is Preparing For Economic Collapse – Does He Know Something That You Don’t?