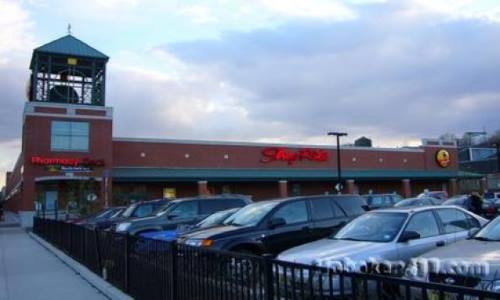 Supermarkets in northeastern New Jersey are literally swamped with customers tonight, so much so that in some locations like Hoboken, lines are literally around the store to get it!

It is a rather unusual situation since there are no closures or shortages of any kind, so SuperStation95 sent one of our intrepid editors, Chris Rivera, to ask what — if anything — is going on?  He reports below:

ShopRite in Hoboken, NJ is one of the largest supermarkets in Hudson County, and certainly the largest in this upscale, preppie, city of one square mile.  Situated on the western side of the mighty Hudson River, one can see the entire New York City Skyline from just about everywhere in Hoboken.  It's a beautiful city.

So what is it that is causing lines out the door and wrapping around supermarkets in town?

Despite the huge parking lot, I had to find street parking to head over to the ShopRite.  I found a space about a block away.

As I approached, I could see lots of typical Hoboken folks, chatting with each other as they patiently wait to get inside.  I asked a few, why the big lines?

"Banks in Italy are collapsing" said Margarie Sytola.  "People can't get money to buy food, the ATM's are all out of cash."  I asked her why a banking issue in Italy would send her to the supermarket in Hoboken, NJ and she snapped back "The world is connected.  What happens in Europe eventually happens here.  I'm not going to be one of the people caught with nothing if the banks close."

Jeff Charles, a nearby shopper who overheard our conversation, chimed-in.  "The banks never stopped gambling with our money after they were bailed out in 2008" he said.  "The oldest bank in Italy, been in business since the year 1472, is going under.  If a bank that old is going under, the rest don't stand a chance" he said.

George Kiaffas, from Athens Greece was also waiting in line.  He had experienced the bank "holidays' in Athens last year before he got out and moved with his family in the US.  "The bankers are all in it together, around the whole world" he said.  "They rape the public and when they lose all our money gambling, they get the politicians to bail them out – but the politicians are broke now, so there won't be anybody to bail anybody out" he continued.  "I took what little money I have out of the bank and I keep it in a safe place now; they won't cause me to go hungry ever again" he added.

I thought it strange that these people all had similar concerns: the banks going under. So I walked around the corner of the store, smoked a cigarette, and took-up conversations with people who were so far away, they couldn't possibly have heard anything the other folks told me.

I told a nearby woman who I was, and that I was doing a story on why there seems to be a big rush to buy food.  Her name is Irena Miskova from Russia and her answer: "The banks are collapsing again and there's no money for the government to bail them out!"

At that moment, it was instantly clear to me that this is panic buying of food for fear of a bank collapse!  Here.  In America.  Hoboken, NJ.  Amazing!

I told Irena that here in the US, we have the Federal Deposit Insurance Corporation (FDIC) which insures all our accounts for up to $250,000.  She replied "Yes, but if you read the fine print, they can take up a YEAR to start paying your back, and up to five years to finish the pay back.  How will I live over those years?"

Max Baker, in line ahead of Irena, chimed in: "The FDIC doesn't have nearly enough money to pay everyone if a bank like Citibank or JP Morgan goes under.  And with Obama playing nasty with China over those islands in the South China Sea, we could see a naval battle with them in the very close future.  If that happens, China won't finance our debt anymore and Congress will have to print the money.  That triggers inflation and we'll all be wiped out."

I was starting to feel very uncomfortable at this point.  How is it that all these average, typical, everyday people were so informed about world events?  How is it that they keep abreast of this stuff?  I'm in the news business and I didn't have a clue as to these concerns.  Yet here were literally hundreds of typical, everyday, average people in Hoboken, New Jersey, who are so tuned-in to what's going on around the world, that they're stocking-up on food because Banks in Italy are failing.

Jermaine Flemming had other concerns.  He talked about the recent violence against police in Dallas and other cities around the country, and worries that these protests are getting out of hand.  "They keep attacking the cops and sooner or later states are gonna call out the national guard; then none of us will be able to go out to the store to get anything" he said.  He said it's better to have extra food for his family for a couple weeks, and not need it, than to need it and not have it.

As I was talking to these folks, several large tractor-trailers were pulling-into the loading docks at the back of the store.  So I walked over to see what I could find out from those guys.

To a man, they all said they were not authorized to speak on behalf of the company, but they told me some basic info.  Each supermarket has computers which track inventory.  When the computers see that items are running low or sold out, they automatically place an order with their supplier, Wakerfern Corporation, and replacement inventory is on a truck the very next day.  Wakefern, they say, has gigantic warehouses and there are no shortages of any food items at all.

I left the store in a sort of stunned silence.  I felt so out-of-the-loop.  So unprepared.  So many people talking about banks in Italy, and even worried about the effect of the violent "Black Lives Matter" protests.  These folks are all thinking ahead.  I felt like I was so pre-occupied with the here-and-now, I wasn't paying attention to what was clearly on the horizon.  How is it that they could see it so clearly while I didn't have a clue?

I called my wife from my cellular phone and told her what was happening.  She was taken aback, and immediately told me she was heading out to the store to stock-up on long-term food. Big bags of rice, bags of beans, boxes of pasta, jars of sauce, canned meats, veggies, fruits . . . . stuff that will last a good long time.  I agreed it was the right thing for us to do. Like Jermaine Flemming said, it's better to have it, and not need it, than to need it, and not have it. 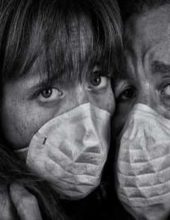