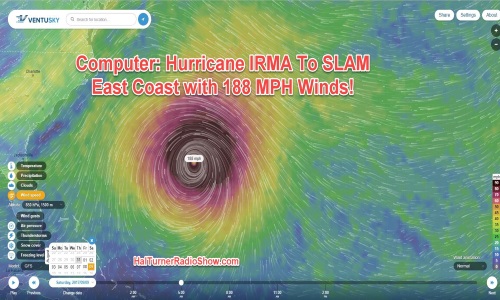 UPDATED AT 5:52   6:56 PM EDT   SEE BOTTOM — Hurricane IRMA is out in the Atlantic Ocean, heading from Africa toward North America.  It strengthened from a "Tropical Storm" to a "Category 2 Hurricane" in 24 hours.  Now, a computer model (projection) is showing IRMA slamming into the US East Coast around Virginia, with . . . . 188 mile per hour winds!

This is just ONE computer model/projection.  IT MAY NOT BE RIGHT.  But one thing that ALL the computer models are showing is that wherever it goes, it will be INTENSELY POWERFUL: 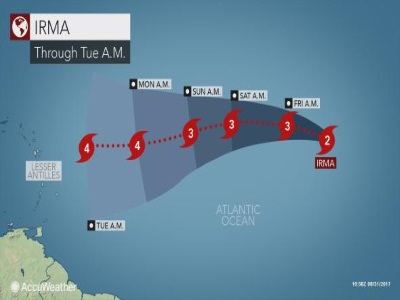 It's just too early to tell where this storm will actually go.  Right now, there are two GENERALIZED possible paths: 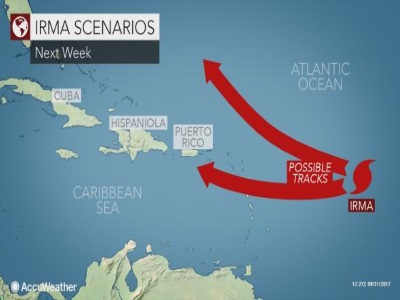 Folks all along the US Eastern Seaboard absolutely MUST keep a close eye on this storm.

Many of the computer models are showing an east coast impact.  Several of those models also show Category 5 strength, with winds exceeding 140 MPH, below. 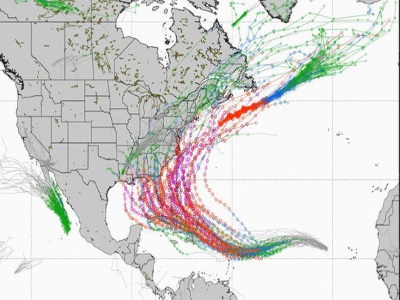 Wherever this storm hits, it's going to be very VERY bad.

Frustratingly, we won't know more about where this storm is heading until around September 4.

I will keep you updated. 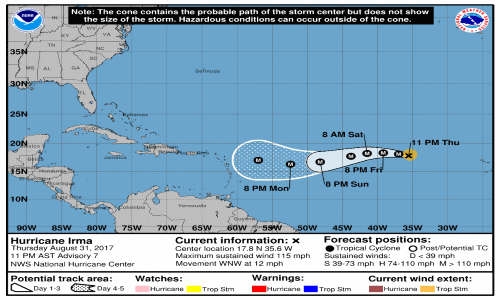 Having gone from a Tropical Storm to a Category 2 Hurricane in ONE day, IRMA has now become a Category 3 Hurricane is LESS THAN ONE DAY!

Worse, new computer models are showing a DIRECT HIT into South Carolina, just south of the border with North Carolina, then smashing its way all the way up to New Jersey and New York City!  See projection below: 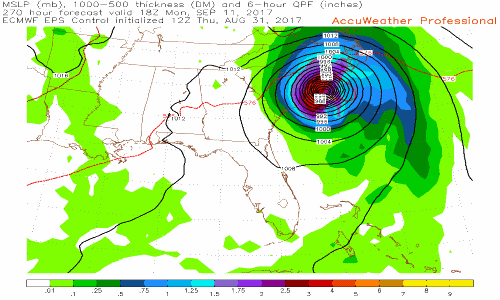 Just got off the phone with a Climate Specialist (Doctor) who told me . . .  and I quote:

"For What It's Worth, one of our models shows possibility of sustained wind speed surpassing 215 mph, which would actually make Irma a Cat-7 using current guidelines.

We are in uncharted waters here."

6 Ways To Prepare Now For Hurricanes

The worst thing that people who live along coastlines can do is not to prepare for tropical storms and hurricanes.

According to the National Hurricane Center, the two key factors contributing to weather safety during hurricanes are preparing in advance for the risks and to act on those preparations when alerted by emergency officials.

The main reason people have to evacuate during hurricanes is from a storm surge, which is an abnormal rise of water generated by a storm’s winds that can reach heights well over 20 feet and can span hundreds of miles of coastlines, according to the National Hurricane Center.

"Evacuation planning is number one on the list,” Knabb said.

Knabb urged that people find out today if they live in a hurricane evacuation area, which is an area in which residents must leave their homes in the event of a hurricane.

Local governments provide the public with information about evacuation areas and the evacuation plans, and Knabb recommended that people review this information in advance.

“Some people will actually test the evacuation route in good weather,” Kottlowski said. “Waiting until the day of the hurricane isn’t a smart idea since everyone will be in a heightened state of anxiety.”

Those who live in mobile homes and high rises may also have to evacuate even if they do not live in an evacuation area, Knabb said.

“It’s not just a beach front problem,” he added.

Pet owners should also have a evacuation plan for their pets. Many shelters offer places to keep pets.

The most important thing that both Knabb and Kottlowski stressed was buying supplies well in advance and keeping those supplies on hand should evacuation be required.

“If you wait until the hurricane is on your doorsteps, you are going to be waiting in long lines and they could even be out of the stuff you need,” Knabb said.

These kits should include water, food, blankets and clothing.

Kottlowski said he recommends that residents have their kits bagged up in a suitcase or plastic tub.

Property owners and renters should be sure to insure their homes against flooding, something that Knabb said many people do not realize is not a part of standard home and renters insurance.

Tenants and home owners can contact their renters or home insurance provider to buy flood insurance, and they should do so even if they do not live right along the coastline.

“People might think that if they don’t live on the coast, then they won’t have a flooding problem,” Knabb said. “But if it can rain, it can flood.”


Car owners should also contact auto insurance companies and move their cars into an off-site location or secured building.

“You won’t be able to take every vehicle you own to the shelter, but if you leave the vehicle outside, it could be seriously damaged,” Kottlowski said.

Those living in or near hurricane areas should make copies of proof of ownership documents of any property not limited to their homes, cars and boats.

These documents can be stored in the hurricane kit or in any safe location that does not risk being damaged during the hurricane.

“If a hurricane levels your house, you have to prove that it is your house,” Kottlowski said.

Residents and tenants should inspect their homes to confirm that there is no damage that a hurricane could increase.

Any issues with the overall structure should be repaired, including loose shingles or damaged roofs.

“Any possible compromises to the roof or house will become an open avenue for strong and gusty winds,” Kottlowski said.

Residences with yards should also make a list of anything laying on the ground outside that could get tossed into the air and become debris during high winds.

Kottlowski also said residents should purchase supplies, including plywood to cover windows and extra security to keep doors from blowing open, in advance, to secure their homes from damaging winds.

6. Back up your electronics

Aside from keeping extra batteries and chargers around during a hurricane, people are also encouraged to backup any electronic devices.

Knabb said data should be stored at an off-site location so that data can be recovered if something were to happen to the physical computer or device during a hurricane.

Businesses should take particular caution in backing up information and sending that information to a remote site. 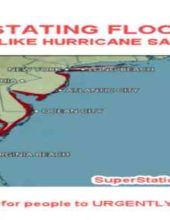 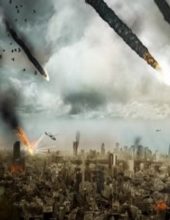 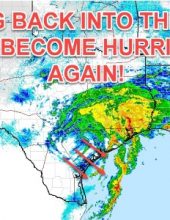 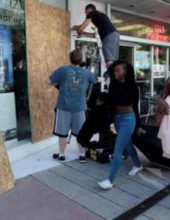