America and Russia fighting on the same side against ISIS: This is the radical realignment that President Trump has been dangling as the linchpin of his promised reboot of the global war on terror. In one of his first executive actions, Trump signed a presidential memorandum on Jan. 28 giving the Secretary of Defense until the end of February to present a “new plan to defeat ISIS,” calling for the “identification of new coalition partners in the fight against ISIS.” Trump has made it clear that he expects Russia to top that list. In an interview this weekend, the President made the case that if the US can work with Russia “in the fight against ISIS, which is a major fight, and Islamic terrorism all over the world…that’s a good thing.”

NATO will fight every country that tries to free itself from jewish debt slavery !
Of course the EU nations are already occupied by NATO and have no NATIONAL armies anymore to free themselves so NATO would like to fight & enslave Russia,China,Iran.
But the Jews who run the USA and NATO know that this will be the end of them because they would loose…
So they will continue to stir up shiet like they do every day all over the world.
That is why Trump just armed the muslims with his 110 billion $$$ trade deal in Saudi Arabia not to forget giving israHell billion$$$ every year courtesy of the American taxpayers…
Good for Putin otherwise the total Jew World Order would have been already reality and every nation on earth would have been debt slaves to Wall-Street and FED Jews !

For the first time in a quarter-century, the prospect of war—real war, war between the major powers—will be on the agenda of Western leaders when they meet at the NATO Summit in Warsaw, Poland, on July 8 and 9. Dominating the agenda in Warsaw (aside, of course, from the “Brexit” vote in the UK) will be discussion of plans to reinforce NATO’s “eastern flank”—the arc of former Soviet partners stretching from the Baltic states to the Black Sea that are now allied with the West but fear military assault by Moscow. Until recently, the prospect of such an attack was given little credence in strategic circles, but now many in NATO believe a major war is possible and that robust defensive measures are required.

Russia’s strategy for the past decade has been to dismantle NATO, erode the values of the transatlantic partnership, and challenge American power. When the Kremlin views a humanitarian crisis and forced migration into Europe as a strategic success, then it’s pretty clear we share little in common strategically with Russia. The 100 years of American blood spilled for Europe was an investment — an investment in a Europe whole, free, and at peace, upon which we have earned ample returns. Compromising that for a one-off action with Russia makes little strategic sense.

Fighting ISIS with Russia would come at the expense of our strategic alliances and partnerships. Our national security is dependent, more than most Americans know, on the partnership structure we refer to as "Five Eyes" — the highly integrated, collaborative intelligence sharing that occurs between the US, Britain, Canada, Australia, and New Zealand. All of these intelligence forces understand the threat that Russia presents to our countries, and they have gone to great effort to prevent Russian infiltration and recruitment. The minute the US agrees, for political reasons, to openly share intelligence with the Russians, the Five Eyes family ends, leaving us immeasurably more exposed to attack. There is nothing we can gain from the Russians that would replace this source of information in our domestic security. It is likely for this reason that the Obama administration’s attempt to launch a joint operations center with Russia to fight ISIS never got off the ground.

NATO aside, we have spent the past 15 years, during wars in Afghanistan and Iraq, building a Western-aligned group of states that share a common commitment and understanding of the threat. A kind of armed brotherhood, these are the nations — Poland, the Baltic states, Georgia, others — that answer the American call to arms most readily because they understand why our strategic objectives matter and they want to be defined as our partners in this fight. They are the frontiers of NATO, and the next generation of warfighters. All of those countries are uncomfortable sharing intelligence with Russia or fighting with Russia, and for good reason: It wasn’t so long ago they rid themselves of Russian occupiers, and they still receive regular Russian threats against their sovereignty. It may be an informal alliance. But we value it, and it evaporates the second we pose for the Russian photo op — or worse, allow Putin to drag us into a replication of his ISIS war in Libya.

This is not to say that Moscow is guiltless regarding the troubled environment along the eastern front, but surely Vladimir Putin has reason to claim that the NATO initiatives pose a substantially heightened threat to Russian security and so justify a corresponding Russian buildup. Any such moves will, of course, invite yet additional NATO deployments, followed by complementary Russian moves, and so on—until we’re right back in a Cold War–like situation.

Finally, there is the risk of accident, miscalculation, and escalation. This arises with particular severity in the case of US/NATO exercises on the edge of Russian territory, especially Kaliningrad. In all such actions, there is a constant danger that one side or the other will overreact to a perceived threat and take steps leading to combat and, conceivably, all-out war. When two Russian fighters flew within 30 feet of a US destroyer sailing in the Baltic Sea this past April, Secretary of State John Kerry told CNN that under US rules of engagement, the planes could have been shot down. Imagine where that could have led. Fortunately, the captain of the destroyer chose to exercise restraint and a serious incident was averted. But as more US and NATO forces are deployed on the edge of Russian territory and both sides engage in provocative military maneuvers, dangerous encounters of this sort are sure to increase in frequency, and the risk of their ending badly will only grow.

No doubt the NATO summit in Warsaw will be overshadowed to some degree by the UK’s Brexit vote and ensuing political turmoil in Europe. But as Western leaders settle down to business, they must not allow their inclination to “demonstrate unity” and “act resolutely” lead them to approve military moves that are inherently destabilizing. Surely it is possible to reassure the Baltic states and Poland without deploying many thousands of additional troops there and inviting an additional military buildup on the Russian side. 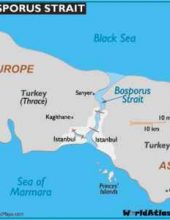