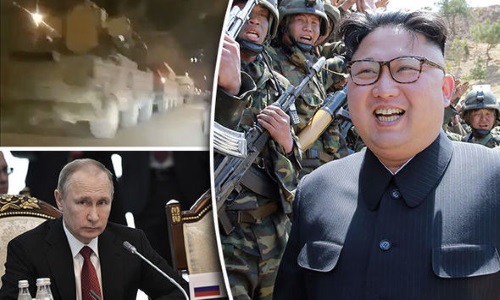 Russian President Vladimir Putin offered his view on the tensions in the Korean Peninsula, warning that the U.S. and North Korea were “on the brink of a large-scale conflict.”

Putin penned a statement published on the Kremlin’s website on Friday, ahead of a summit of BRICS (Brazil, Russia, India, China, South Africa) nations in China next week.

“I have to say a few words about the situation on the Korean Peninsula, where tensions have grown recently and the situation is balancing on the brink of a large-scale conflict,” he wrote.

The Russian president said that focusing solely on pressuring North Korea to give up its missile program is “misguided and futile.”

Russia voted along with the rest of the U.N. Security Council to impose stricter sanctions on North Korea following the two missile test launches in July, even though Moscow rejects the claims, made by both North Korea and the U.S., that the rocket tested was an intercontinental ballistic missile (ICBM).

Since the emergence of the Vladivostok footage, fears have grown that North Korea could become the trigger for a conflict involving the US, China and Russia.

Both China and Russia consider North Korea as a necessary buffer state, which they need to keep stable for their own national security.

According to the reports, a military convoy of eight surface-to-air missiles, part of Russian Air Defence, were on the move.

The S400 anti-aircraft missiles were moved to Vladivostok, where Vladimir Putin already has a major navy base.

“Russian experts put most of the blame for this escalating crisis on the United States. They are skeptical that North Korea would ever attack the United States, seeing such threats as just a bluff,” Georgy Toloraya, Director of Korean Programs at the Institute of Economy at the Russian Academy of Science, wrote on 38 North, a North Korea monitoring project at Johns Hopkins University, in Baltimore.

Moscow has already told Washington that additional sanctions on North Korea could prove “counterproductive and dangerous.” In his statement, Putin invited all parties to reject belligerent rhetoric and instead engage in dialogue.

“The region’s problems should only be settled through a direct dialogue of all the parties concerned without any preconditions. Provocations, pressure and militarist and insulting rhetoric are a dead-end road,” the Russian president wrote, apparently referencing incendiary statements made both by North Korea, which claims to have a plan to strike the U.S. territory of Guam, and President Donald Trump, who warned Pyongyang that its threats would be met with “fire and fury.”

Russia’s position is similar to China’s, which also has backed U.N. sanctions against North Korea but has called for moderation from all parties involved. Russia and China, who both share a border with North Korea, are also both opposed to the U.S. carrying out joint military drills in South Korea.

Russia, which has repeatedly voiced concerns over the risk of a military confrontation on the Korean Peninsula, is also nervous about Japan’s plan to increase its nuclear missile defense capabilities with the deployment of the land-based U.S. Aegis Ashore system.

He also said that "the United States is a large country who constantly rattles its saber in close vicinity [to North Korea]." "What kind of response can North Korea give? They express their readiness to use the weapons that they have, because they understand what will happen the day after someone takes Pyongyang," the Russian deputy prime minister noted. "They can see perfectly well what happened to other countries, so their behavior is understandable," Trutnev added.
He was confident that "certain politicians should calm down a little, and the situation will calm down, too." According to Trutnev, North Korea "would only be glad" to address the development of its economy in order to improve the living standards of the nation’s people. "I am sure that is what they would be doing if they were not constantly being intimidated," he noted.

Trump said he was considering additional sanctions on North Korea, adding these would be "very strong." He gave no details and did not make clear whether he meant unilateral or multilateral sanctions.

U.S. officials have said new U.S. steps that would target Chinese banks and firms doing business with Pyongyang are in the works, but these have appeared to be put on hold to give Beijing time to show it is serious about enforcing new U.N. sanctions.
Trump said he did not want to talk about diplomatic "back channels" with North Korea after U.S. media reports that Joseph Yun, the U.S. envoy for North Korea policy, had engaged in diplomacy for several months with Pak Song Il, a senior diplomat at Pyongyang's U.N. mission, on the deteriorating ties and the issue of Americans imprisoned in North Korea.

But Daniel Russel, until April the top U.S. diplomat for East Asia, said this so-called New York channel had been a relatively commonplace means of communication with North Korea over the years, and it was not a forum for negotiation.

"It's never been a vehicle for negotiations and this doesn’t constitute substantive U.S.-DPRK dialogue," he said, using the acronym for North Korea's formal name, Democratic People's Republic of Korea.