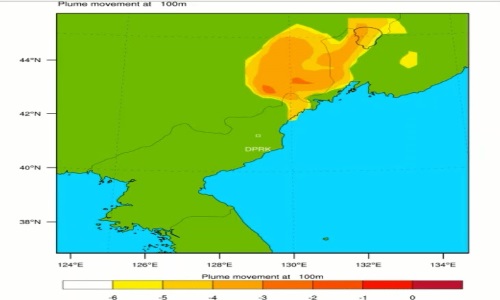 Collapse of North Korean Nuke-Test, R A D I A T I O N

The Comprehensive Nuclear Test-Ban Treaty Organization has issued a computer model showing the path of a deadly radiation plume from North Korea's September 3 hydrogen bomb test.  I have the computer model, you can view it below.

As the entire civilized world knows, North Korea test-detonated a nuclear bomb on September 3.  Seismographs around the world picked up the underground blast as if it was an earthquake, measuring Magnitude 6.3, ten times larger than their previous underground nuke test which registered as a Magnitude 5.3 . . .  Leading experts to conclude the prior blast -estimated at ten kiloton – was vastly exceeded by a ten-times-stronger September 3 blast which is now publicly estimated to have been 100-120 kilotons.  Thermonuclear.  A Hydrogen Bomb.

Shortly after the Magnitude 6.3, an actual earthquake measuring 4.3 took place in the same region as registered by seismographs.  Experts say this was the inside of the test-site mountain, collapsing.

With the collapse, it is now feared that a deadly plume of radiation may have begun leaking from the test site.  Here is what the Comprehensive Nuclear Test-Ban Treaty Organization plots as the path of deadly radiationl:

How will you protect your savings and yourself in the event of an WAR? This just-released PDF guide Surviving and Thriving During an WAR will show you exactly how. Click here to download the PDF now.